Were Hedge Funds Right About Warming Up To AerCap Holdings N.V. (AER) ?

AerCap Holdings N.V. (NYSE:AER) has experienced an increase in enthusiasm from smart money recently. AER was in 27 hedge funds’ portfolios at the end of June. There were 23 hedge funds in our database with AER positions at the end of the previous quarter. Our calculations also showed that AER isn’t among the 30 most popular stocks among hedge funds (view the video below).

Unlike some fund managers who are betting on Dow reaching 40000 in a year, our long-short investment strategy doesn’t rely on bull markets to deliver double digit returns. We only rely on hedge fund buy/sell signals. We’re going to take a glance at the fresh hedge fund action surrounding AerCap Holdings N.V. (NYSE:AER).

Heading into the third quarter of 2019, a total of 27 of the hedge funds tracked by Insider Monkey were bullish on this stock, a change of 17% from the previous quarter. The graph below displays the number of hedge funds with bullish position in AER over the last 16 quarters. With hedge funds’ positions undergoing their usual ebb and flow, there exists an “upper tier” of key hedge fund managers who were adding to their holdings considerably (or already accumulated large positions). 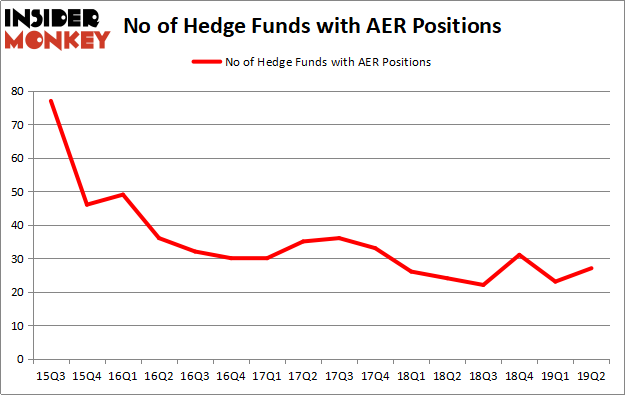 According to Insider Monkey’s hedge fund database, Boykin Curry’s Eagle Capital Management has the biggest position in AerCap Holdings N.V. (NYSE:AER), worth close to $418.6 million, comprising 1.5% of its total 13F portfolio. Coming in second is David Einhorn of Greenlight Capital, with a $181.2 million position; 13.4% of its 13F portfolio is allocated to the stock. Some other professional money managers that hold long positions consist of Matthew Lindenbaum’s Basswood Capital, Noam Gottesman’s GLG Partners and Phill Gross and Robert Atchinson’s Adage Capital Management.

As you can see these stocks had an average of 26.5 hedge funds with bullish positions and the average amount invested in these stocks was $379 million. That figure was $805 million in AER’s case. Planet Fitness Inc (NYSE:PLNT) is the most popular stock in this table. On the other hand Hubbell Incorporated (NYSE:HUBB) is the least popular one with only 18 bullish hedge fund positions. AerCap Holdings N.V. (NYSE:AER) is not the most popular stock in this group but hedge fund interest is still above average. Our calculations showed that top 20 most popular stocks among hedge funds returned 24.4% in 2019 through September 30th and outperformed the S&P 500 ETF (SPY) by 4 percentage points. Hedge funds were also right about betting on AER, though not to the same extent, as the stock returned 5.3% during the third quarter and outperformed the market as well.