We hate to say this but, we told you so. On February 27th we published an article with the title Recession is Imminent: We Need A Travel Ban NOW and predicted a US recession when the S&P 500 Index was trading at the 3150 level. We also told you to short the market and buy long-term Treasury bonds. Our article also called for a total international travel ban. While we were warning you, President Trump minimized the threat and failed to act promptly. As a result of his inaction, we will now experience a deeper recession (see why hell is coming). In these volatile markets we scrutinize hedge fund filings to get a reading on which direction each stock might be going. With the first-quarter round of 13F filings behind us it is time to take a look at the stocks in which some of the best money managers in the world preferred to invest or sell heading into the first quarter. One of these stocks was ViacomCBS Inc. (NASDAQ:VIAC).

ViacomCBS Inc. (NASDAQ:VIAC) was in 64 hedge funds’ portfolios at the end of the fourth quarter of 2019. VIAC has experienced an increase in hedge fund interest lately. There were 42 hedge funds in our database with VIAC positions at the end of the previous quarter. Our calculations also showed that VIAC isn’t among the 30 most popular stocks among hedge funds (click for Q4 rankings and see the video at the end of this article for Q3 rankings).

In the eyes of most traders, hedge funds are perceived as slow, outdated investment vehicles of yesteryear. While there are more than 8000 funds trading today, Our experts look at the masters of this club, about 850 funds. These investment experts direct the lion’s share of all hedge funds’ total capital, and by tailing their highest performing equity investments, Insider Monkey has identified numerous investment strategies that have historically beaten the S&P 500 index. Insider Monkey’s flagship short hedge fund strategy outperformed the S&P 500 short ETFs by around 20 percentage points per year since its inception in March 2017. Our portfolio of short stocks lost 35.3% since February 2017 (through March 3rd) even though the market was up more than 35% during the same period. We just shared a list of 7 short targets in our latest quarterly update .

We leave no stone unturned when looking for the next great investment idea. For example, this trader is claiming triple digit returns, so we check out his latest trade recommendations. Blockchain technology is about to go mainstream and reach heavy adoption, so we check out this tech investor’s blockchain stock pick. We read hedge fund investor letters and listen to stock pitches at hedge fund conferences (by the way watch this video if you want to hear one of the best healthcare hedge fund manager’s coronavirus analysis). Our best call in 2020 was shorting the market when S&P 500 was trading at 3150 after realizing the coronavirus pandemic’s significance before most investors. Keeping this in mind we’re going to view the fresh hedge fund action encompassing ViacomCBS Inc. (NASDAQ:VIAC).

What have hedge funds been doing with ViacomCBS Inc. (NASDAQ:VIAC)? 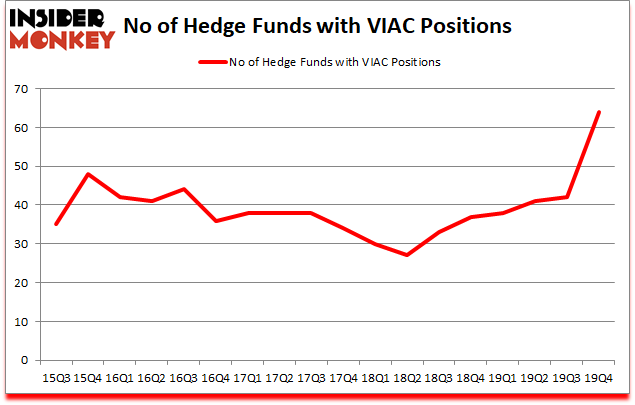 The largest stake in ViacomCBS Inc. (NASDAQ:VIAC) was held by Baupost Group, which reported holding $713.5 million worth of stock at the end of September. It was followed by Glenview Capital with a $632.9 million position. Other investors bullish on the company included Paulson & Co, Ariel Investments, and TOMS Capital. In terms of the portfolio weights assigned to each position TOMS Capital allocated the biggest weight to ViacomCBS Inc. (NASDAQ:VIAC), around 19.75% of its 13F portfolio. KG Funds Management is also relatively very bullish on the stock, designating 12.52 percent of its 13F equity portfolio to VIAC.

As industrywide interest jumped, key money managers were leading the bulls’ herd. Baupost Group, managed by Seth Klarman, created the most outsized position in ViacomCBS Inc. (NASDAQ:VIAC). Baupost Group had $713.5 million invested in the company at the end of the quarter. Larry Robbins’s Glenview Capital also made a $632.9 million investment in the stock during the quarter. The other funds with new positions in the stock are Dan Loeb’s Third Point, Ike Kier and Ilya Zaides’s KG Funds Management, and David Fiszel’s Honeycomb Asset Management.

As you can see these stocks had an average of 41.25 hedge funds with bullish positions and the average amount invested in these stocks was $1161 million. That figure was $3293 million in VIAC’s case. Pioneer Natural Resources Company (NYSE:PXD) is the most popular stock in this table. On the other hand Archer Daniels Midland Company (NYSE:ADM) is the least popular one with only 28 bullish hedge fund positions. Compared to these stocks ViacomCBS Inc. (NASDAQ:VIAC) is more popular among hedge funds. Our calculations showed that top 10 most popular stocks among hedge funds returned 41.4% in 2019 and outperformed the S&P 500 ETF (SPY) by 10.1 percentage points. These stocks lost 1.0% in 2020 through April 20th and still beat the market by 11 percentage points. Unfortunately VIAC wasn’t nearly as popular as these 10 stocks and hedge funds that were betting on VIAC were disappointed as the stock returned -62.5% during the three months of 2020 (through April 20th) and underperformed the market. If you are interested in investing in large cap stocks with huge upside potential, you should check out the top 10 most popular stocks among hedge funds as most of these stocks already outperformed the market in 2020.

Were Hedge Funds Right About DuPont de Nemours Inc (DD)?
Monthly Newsletter Strategy
Download a free copy of our newsletter and see the details inside!
Hedge Fund Resource Center
Related News
Hedge Funds Have Never Been This Bullish On ViacomCBS Inc. (VIAC) 10 Best Imported Beer In 2020 Top 10 Shipping Companies in the World in 2020 15 Unfriendliest Cities in the US in 2020
Billionaire Hedge Funds