Were Hedge Funds Right About The Walt Disney Company (DIS)?

In these volatile markets we scrutinize hedge fund filings to get a reading on which direction each stock might be going. Out of thousands of stocks that are currently traded on the market, it is difficult to identify those that will really generate strong returns. Hedge funds and institutional investors spend millions of dollars on analysts with MBAs and PhDs, who are industry experts and well connected to other industry and media insiders on top of that. Individual investors can piggyback the hedge funds employing these talents and can benefit from their vast resources and knowledge in that way. We analyze quarterly 13F filings of nearly 835 hedge funds and, by looking at the smart money sentiment that surrounds a stock, we can determine whether it has the potential to beat the market over the long-term. Therefore, let’s take a closer look at what smart money thinks about The Walt Disney Company (NYSE:DIS).

The Walt Disney Company (NYSE:DIS) shareholders have witnessed an increase in activity from the world’s largest hedge funds lately. DIS was in 118 hedge funds’ portfolios at the end of the fourth quarter of 2019. There were 115 hedge funds in our database with DIS holdings at the end of the previous quarter. Our calculations also showed that DIS ranked 12th among the 30 most popular stocks among hedge funds (click for Q4 rankings and see the video at the end of this article for Q3 rankings).

We leave no stone unturned when looking for the next great investment idea. For example, this trader is claiming triple digit returns, so we check out his latest trade recommendations We are probably at the peak of the COVID-19 pandemic, so we check out this biotech investor’s coronavirus picks. We read hedge fund investor letters and listen to stock pitches at hedge fund conferences (by the way watch this video if you want to hear one of the best healthcare hedge fund manager’s coronavirus analysis). Our best call in 2020 was shorting the market when S&P 500 was trading at 3150 after realizing the coronavirus pandemic’s significance before most investors. Keeping this in mind let’s take a look at the recent hedge fund action surrounding The Walt Disney Company (NYSE:DIS).

What does smart money think about The Walt Disney Company (NYSE:DIS)?

At the end of the fourth quarter, a total of 118 of the hedge funds tracked by Insider Monkey were bullish on this stock, a change of 3% from the previous quarter. Below, you can check out the change in hedge fund sentiment towards DIS over the last 18 quarters. So, let’s see which hedge funds were among the top holders of the stock and which hedge funds were making big moves. 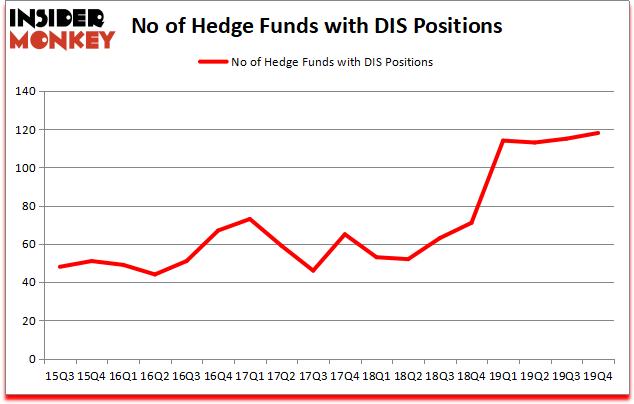 The largest stake in The Walt Disney Company (NYSE:DIS) was held by Citadel Investment Group, which reported holding $558.7 million worth of stock at the end of September. It was followed by Yacktman Asset Management with a $547.7 million position. Other investors bullish on the company included Diamond Hill Capital, Anchorage Advisors, and D E Shaw. In terms of the portfolio weights assigned to each position Anchorage Advisors allocated the biggest weight to The Walt Disney Company (NYSE:DIS), around 15.32% of its 13F portfolio. Park Presidio Capital is also relatively very bullish on the stock, designating 11.44 percent of its 13F equity portfolio to DIS.

With a general bullishness amongst the heavyweights, some big names have jumped into The Walt Disney Company (NYSE:DIS) headfirst. Whale Rock Capital Management, managed by Alex Sacerdote, created the most valuable position in The Walt Disney Company (NYSE:DIS). Whale Rock Capital Management had $239.3 million invested in the company at the end of the quarter. Frank Brosens’s Taconic Capital also made a $57.9 million investment in the stock during the quarter. The following funds were also among the new DIS investors: Louis Bacon’s Moore Global Investments, Gavin Baker’s Atreides Management, and Robert B. Gillam’s McKinley Capital Management.

As you can see these stocks had an average of 66.25 hedge funds with bullish positions and the average amount invested in these stocks was $9206 million. That figure was $4968 million in DIS’s case. The Home Depot, Inc. (NYSE:HD) is the most popular stock in this table. On the other hand The Coca-Cola Company (NYSE:KO) is the least popular one with only 51 bullish hedge fund positions. Compared to these stocks The Walt Disney Company (NYSE:DIS) is more popular among hedge funds. Our calculations showed that top 10 most popular stocks among hedge funds returned 41.4% in 2019 and outperformed the S&P 500 ETF (SPY) by 10.1 percentage points. These stocks lost 1.0% in 2020 through April 20th and still beat the market by 11 percentage points. Unfortunately DIS wasn’t nearly as popular as these 10 stocks and hedge funds that were betting on DIS were disappointed as the stock returned -29.3% during the three months of 2020 (through April 20th) and underperformed the market. If you are interested in investing in large cap stocks with huge upside potential, you should check out the top 10 most popular stocks among hedge funds as most of these stocks already outperformed the market in 2020.