In these volatile markets we scrutinize hedge fund filings to get a reading on which direction each stock might be going. Our extensive research has shown that imitating the smart money can generate significant returns for retail investors, which is why we track nearly 835 active prominent money managers and analyze their quarterly 13F filings. The stocks that are heavily bought by hedge funds historically outperformed the market, though there is no shortage of high profile failures like hedge funds’ 2018 losses in Facebook and Apple. Let’s take a closer look at what the funds we track think about The Charles Schwab Corporation (NYSE:SCHW) in this article.

Is The Charles Schwab Corporation (NYSE:SCHW) ready to rally soon? Hedge funds are taking an optimistic view. The number of bullish hedge fund bets moved up by 11 in recent months. Our calculations also showed that SCHW isn’t among the 30 most popular stocks among hedge funds (click for Q4 rankings and see the video at the end of this article for Q3 rankings). SCHW was in 70 hedge funds’ portfolios at the end of December. There were 59 hedge funds in our database with SCHW holdings at the end of the previous quarter.

To most stock holders, hedge funds are seen as unimportant, outdated investment vehicles of yesteryear. While there are over 8000 funds in operation today, We hone in on the masters of this group, about 850 funds. It is estimated that this group of investors direct the lion’s share of the smart money’s total capital, and by keeping an eye on their first-class picks, Insider Monkey has identified several investment strategies that have historically outstripped Mr. Market. Insider Monkey’s flagship short hedge fund strategy outperformed the S&P 500 short ETFs by around 20 percentage points annually since its inception in March 2017. Our portfolio of short stocks lost 35.3% since February 2017 (through March 3rd) even though the market was up more than 35% during the same period. We just shared a list of 7 short targets in our latest quarterly update .

We leave no stone unturned when looking for the next great investment idea. For example, this trader is claiming triple digit returns, so we check out his latest trade recommendations. We read hedge fund investor letters and listen to stock pitches at hedge fund conferences (by the way watch this video if you want to hear one of the best healthcare hedge fund manager’s coronavirus analysis). Our best call in 2020 was shorting the market when S&P 500 was trading at 3150 after realizing the coronavirus pandemic’s significance before most investors. With all of this in mind we’re going to analyze the latest hedge fund action surrounding The Charles Schwab Corporation (NYSE:SCHW).

What does smart money think about The Charles Schwab Corporation (NYSE:SCHW)? 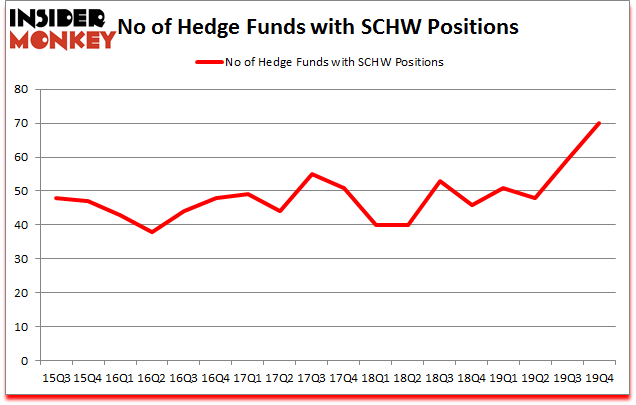 The largest stake in The Charles Schwab Corporation (NYSE:SCHW) was held by Generation Investment Management, which reported holding $1414.4 million worth of stock at the end of September. It was followed by Route One Investment Company with a $637 million position. Other investors bullish on the company included Eminence Capital, Diamond Hill Capital, and Citadel Investment Group. In terms of the portfolio weights assigned to each position Route One Investment Company allocated the biggest weight to The Charles Schwab Corporation (NYSE:SCHW), around 17.99% of its 13F portfolio. Triple Frond Partners is also relatively very bullish on the stock, setting aside 10.85 percent of its 13F equity portfolio to SCHW.

As you can see these stocks had an average of 42 hedge funds with bullish positions and the average amount invested in these stocks was $1905 million. That figure was $4021 million in SCHW’s case. Micron Technology, Inc. (NASDAQ:MU) is the most popular stock in this table. On the other hand Westpac Banking Corporation (NYSE:WBK) is the least popular one with only 7 bullish hedge fund positions. The Charles Schwab Corporation (NYSE:SCHW) is not the most popular stock in this group but hedge fund interest is still above average. This is a slightly positive signal but we’d rather spend our time researching stocks that hedge funds are piling on. Our calculations showed that top 10 most popular stocks among hedge funds returned 41.4% in 2019 and outperformed the S&P 500 ETF (SPY) by 10.1 percentage points. These stocks lost 1.0% in 2020 through April 20th but beat the market by 11 percentage points. Unfortunately SCHW wasn’t nearly as popular as these 10 stocks and hedge funds that were betting on SCHW were disappointed as the stock returned -22.8% during the same time period and underperformed the market. If you are interested in investing in large cap stocks with huge upside potential, you should check out the top 10 most popular stocks among hedge funds as many of these stocks already outperformed the market so far this year.