In these volatile markets we scrutinize hedge fund filings to get a reading on which direction each stock might be going. With this in mind let’s see whether Stryker Corporation (NYSE:SYK) makes for a good investment at the moment. We analyze the sentiment of a select group of the very best investors in the world, who spend immense amounts of time and resources studying companies. They may not always be right (no one is), but data shows that their consensus long positions have historically outperformed the market when we adjust for known risk factors.

Stryker Corporation (NYSE:SYK) investors should be aware of an increase in enthusiasm from smart money recently. SYK was in 43 hedge funds’ portfolios at the end of December. There were 36 hedge funds in our database with SYK positions at the end of the previous quarter. Our calculations also showed that SYK isn’t among the 30 most popular stocks among hedge funds (click for Q4 rankings and see the video at the end of this article for Q3 rankings).

At Q4’s end, a total of 43 of the hedge funds tracked by Insider Monkey were bullish on this stock, a change of 19% from the previous quarter. Below, you can check out the change in hedge fund sentiment towards SYK over the last 18 quarters. With the smart money’s capital changing hands, there exists a few notable hedge fund managers who were adding to their stakes considerably (or already accumulated large positions). 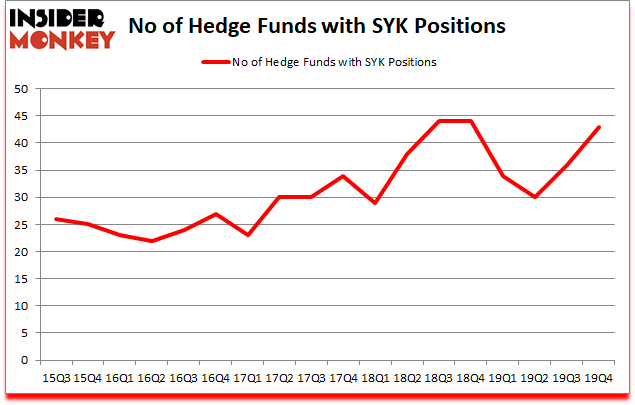 More specifically, GQG Partners was the largest shareholder of Stryker Corporation (NYSE:SYK), with a stake worth $164.7 million reported as of the end of September. Trailing GQG Partners was Renaissance Technologies, which amassed a stake valued at $91 million. Point72 Asset Management, Adage Capital Management, and AQR Capital Management were also very fond of the stock, becoming one of the largest hedge fund holders of the company. In terms of the portfolio weights assigned to each position GuardCap Asset Management allocated the biggest weight to Stryker Corporation (NYSE:SYK), around 3.06% of its 13F portfolio. Sivik Global Healthcare is also relatively very bullish on the stock, setting aside 1.95 percent of its 13F equity portfolio to SYK.

As one would reasonably expect, some big names were breaking ground themselves. Renaissance Technologies, founded by Jim Simons, created the largest position in Stryker Corporation (NYSE:SYK). Renaissance Technologies had $91 million invested in the company at the end of the quarter. Steve Cohen’s Point72 Asset Management also initiated a $69.9 million position during the quarter. The following funds were also among the new SYK investors: Brian Ashford-Russell and Tim Woolley’s Polar Capital, Israel Englander’s Millennium Management, and Peter Rathjens, Bruce Clarke and John Campbell’s Arrowstreet Capital.

As you can see these stocks had an average of 55.25 hedge funds with bullish positions and the average amount invested in these stocks was $2686 million. That figure was $833 million in SYK’s case. Cigna Corporation (NYSE:CI) is the most popular stock in this table. On the other hand Truist Financial Corporation (NYSE:TFC) is the least popular one with only 35 bullish hedge fund positions. Stryker Corporation (NYSE:SYK) is not the least popular stock in this group but hedge fund interest is still below average. This is a slightly negative signal and we’d rather spend our time researching stocks that hedge funds are piling on. Our calculations showed that top 10 most popular stocks among hedge funds returned 41.4% in 2019 and outperformed the S&P 500 ETF (SPY) by 10.1 percentage points. These stocks gained 1.0% in 2020 through May 1st but beat the market by 12.9 percentage points. Unfortunately SYK wasn’t nearly as popular as these 10 stocks (hedge fund sentiment was quite bearish); SYK investors were disappointed as the stock returned -13.7% during the same time period and underperformed the market. If you are interested in investing in large cap stocks with huge upside potential, you should check out the top 10 most popular stocks among hedge funds as most of these stocks already outperformed the market in 2020.