How do you pick the next stock to invest in? One way would be to spend hours of research browsing through thousands of publicly traded companies. However, an easier way is to look at the stocks that smart money investors are collectively bullish on. Hedge funds and other institutional investors usually invest large amounts of capital and have to conduct due diligence while choosing their next pick. They don’t always get it right, but, on average, their stock picks historically generated strong returns after adjusting for known risk factors. With this in mind, let’s take a look at the recent hedge fund activity surrounding Public Storage (NYSE:PSA).

Is Public Storage (NYSE:PSA) the right pick for your portfolio? Money managers are betting on the stock. The number of bullish hedge fund positions increased by 3 recently though overall trend in hedge fund sentiment has been negative since 2016. Our calculations also showed that PSA isn’t among the 30 most popular stocks among hedge funds. PSA was in 18 hedge funds’ portfolios at the end of the fourth quarter of 2018. There were 15 hedge funds in our database with PSA positions at the end of the previous quarter.

Today there are plenty of tools investors put to use to analyze publicly traded companies. A duo of the less known tools are hedge fund and insider trading indicators. Our researchers have shown that, historically, those who follow the top picks of the best money managers can outpace their index-focused peers by a healthy margin (see the details here).

What have hedge funds been doing with Public Storage (NYSE:PSA)?

At the end of the fourth quarter, a total of 18 of the hedge funds tracked by Insider Monkey were long this stock, a change of 20% from the second quarter of 2018. On the other hand, there were a total of 15 hedge funds with a bullish position in PSA a year ago. With the smart money’s capital changing hands, there exists an “upper tier” of notable hedge fund managers who were increasing their stakes meaningfully (or already accumulated large positions). 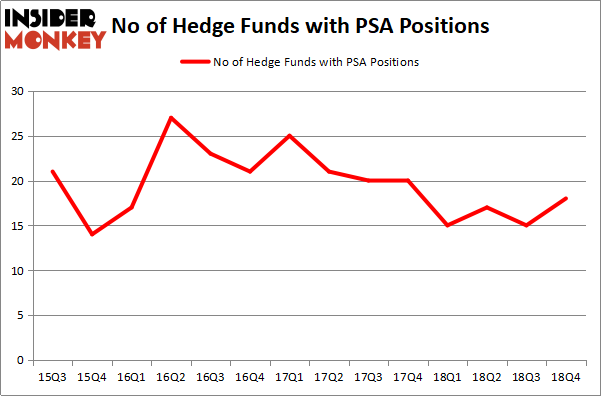 Now, some big names were breaking ground themselves. Alkeon Capital Management, managed by Panayotis Takis Sparaggis, assembled the biggest call position in Public Storage (NYSE:PSA). Alkeon Capital Management had $101.2 million invested in the company at the end of the quarter. Dmitry Balyasny’s Balyasny Asset Management also made a $44.4 million investment in the stock during the quarter. The other funds with new positions in the stock are Richard Driehaus’s Driehaus Capital, Ben Levine, Andrew Manuel and Stefan Renold’s LMR Partners, and Joel Greenblatt’s Gotham Asset Management.

As you can see these stocks had an average of 29.75 hedge funds with bullish positions and the average amount invested in these stocks was $1103 million. That figure was $842 million in PSA’s case. The Progressive Corporation (NYSE:PGR) is the most popular stock in this table. On the other hand Banco Bilbao Vizcaya Argentaria SA (NYSE:BBVA) is the least popular one with only 4 bullish hedge fund positions. Public Storage (NYSE:PSA) is not the least popular stock in this group but hedge fund interest is still below average. This is a slightly negative signal and we’d rather spend our time researching stocks that hedge funds are piling on. Our calculations showed that top 15 most popular stocks among hedge funds returned 19.7% through March 15th and outperformed the S&P 500 ETF (SPY) by 6.6 percentage points. Unfortunately PSA wasn’t in this group. Hedge funds that bet on PSA were disappointed as the stock returned 8.5% and underperformed the market. If you are interested in investing in large cap stocks, you should check out the top 15 hedge fund stocks as 13 of these outperformed the market.