Is Yum! Brands, Inc. (NYSE:YUM) a good stock to buy now? Money managers are becoming more confident. The number of long hedge fund positions went up by 4 lately. We should note that the overall trend in hedge fund sentiment is still very negative. YUM was among the most popular hedge fund stocks in 2015, however, our current calculations showed that YUM isn’t among the 30 most popular stocks among hedge funds anymore.

What have hedge funds been doing with Yum! Brands, Inc. (NYSE:YUM)? 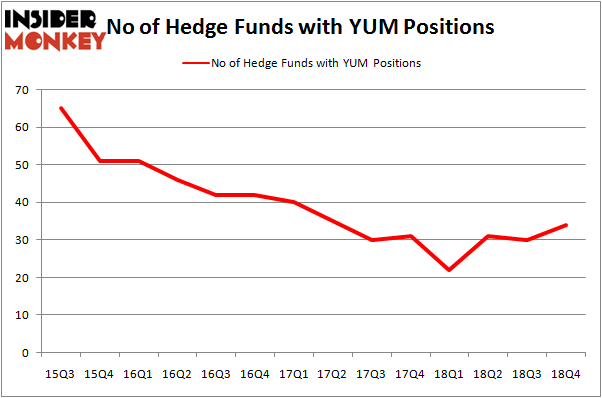 More specifically, D E Shaw was the largest shareholder of Yum! Brands, Inc. (NYSE:YUM), with a stake worth $267.2 million reported as of the end of September. Trailing D E Shaw was Two Sigma Advisors, which amassed a stake valued at $235.4 million. Citadel Investment Group, Arrowstreet Capital, and Marshall Wace LLP were also very fond of the stock, giving the stock large weights in their portfolios.

As you can see these stocks had an average of 35 hedge funds with bullish positions and the average amount invested in these stocks was $1750 million. That figure was $1304 million in YUM’s case. Equinix Inc (REIT) (NASDAQ:EQIX) is the most popular stock in this table. On the other hand Dollar General Corp. (NYSE:DG) is the least popular one with only 30 bullish hedge fund positions. Yum! Brands, Inc. (NYSE:YUM) is not the least popular stock in this group but hedge fund interest is still below average. This is a slightly negative signal and we’d rather spend our time researching stocks that hedge funds are piling on. Our calculations showed that top 15 most popular stocks among hedge funds returned 19.7% through March 15th and outperformed the S&P 500 ETF (SPY) by 6.6 percentage points. Unfortunately YUM wasn’t in this group. Hedge funds that bet on YUM were disappointed as the stock returned 10.3% and underperformed the market. If you are interested in investing in large cap stocks, you should check out the top 15 hedge fund stocks as 13 of these outperformed the market.

Is IQVIA Holdings, Inc. (IQV) A Good Stock To Buy?
Monthly Newsletter Strategy
Download a free copy of our newsletter and see the details inside!
Hedge Fund Resource Center
Related News
Hedge Fund and Insider Trading News: ValueAct Capital, David Tepper, Caesars Entertainment Corporation (CZR), Legacy Reserves LP Unit (LGCY), Yum! Brands, Inc. (YUM), and More 11 Fastest Growing Franchises in the US in 2018 11 Biggest Fast Food Franchises In The World In 2017 15 Largest, Most Popular and Successful Fast Food Chains In The World 11 Companies With The Most Employees In The US 11 Most Successful Fast Food Chains In The World Corvex Capital’s Top Holdings and Largest Moves from Last Quarter Ten of the Most Common Addictions 13 African Countries with the Largest White Population in 2018 6 Causes of Human Trafficking in Africa, India, and US
Billionaire Hedge Funds