As we already know from media reports and hedge fund investor letters, many hedge funds lost money in fourth quarter, blaming macroeconomic conditions and unpredictable events that hit several sectors, with technology among them. Nevertheless, most investors decided to stick to their bullish theses and their long-term focus allows us to profit from the recent declines. In particular, let’s take a look at what hedge funds think about WestRock Company (NYSE:WRK) in this article.

WestRock Company (NYSE:WRK) was in 29 hedge funds’ portfolios at the end of December. WRK investors should pay attention to a decrease in hedge fund interest recently. There were 33 hedge funds in our database with WRK positions at the end of the previous quarter. Our calculations also showed that WRK isn’t among the 30 most popular stocks among hedge funds.

What have hedge funds been doing with WestRock Company (NYSE:WRK)?

At Q4’s end, a total of 29 of the hedge funds tracked by Insider Monkey were long this stock, a change of -12% from one quarter earlier. By comparison, 24 hedge funds held shares or bullish call options in WRK a year ago. With hedge funds’ capital changing hands, there exists a few notable hedge fund managers who were boosting their holdings substantially (or already accumulated large positions). 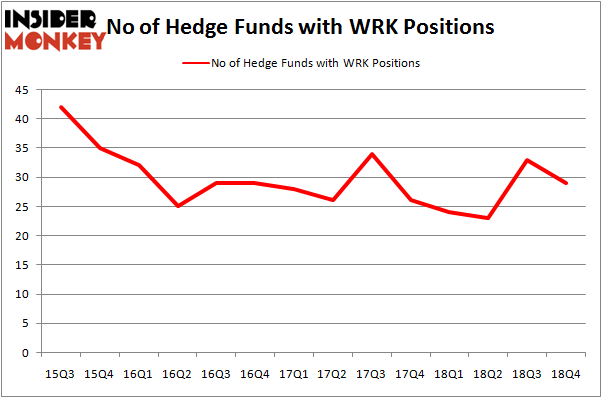 The largest stake in WestRock Company (NYSE:WRK) was held by Lakewood Capital Management, which reported holding $131.1 million worth of stock at the end of September. It was followed by Millennium Management with a $80.6 million position. Other investors bullish on the company included Impax Asset Management, AQR Capital Management, and Two Sigma Advisors.

Since WestRock Company (NYSE:WRK) has witnessed a decline in interest from the entirety of the hedge funds we track, it’s safe to say that there were a few funds who were dropping their full holdings in the third quarter. Intriguingly, Jim Simons’s Renaissance Technologies dumped the biggest position of the 700 funds followed by Insider Monkey, valued at an estimated $30.2 million in stock, and George McCabe’s Portolan Capital Management was right behind this move, as the fund cut about $14.8 million worth. These bearish behaviors are important to note, as total hedge fund interest was cut by 4 funds in the third quarter.

As you can see these stocks had an average of 22.25 hedge funds with bullish positions and the average amount invested in these stocks was $371 million. That figure was $454 million in WRK’s case. Cabot Oil & Gas Corporation (NYSE:COG) is the most popular stock in this table. On the other hand Brookfield Infrastructure Partners L.P. (NYSE:BIP) is the least popular one with only 8 bullish hedge fund positions. WestRock Company (NYSE:WRK) is not the most popular stock in this group but hedge fund interest is still above average. This is a slightly positive signal but we’d rather spend our time researching stocks that hedge funds are piling on. Our calculations showed that top 15 most popular stocks among hedge funds returned 19.7% through March 15th and outperformed the S&P 500 ETF (SPY) by 6.6 percentage points. Unfortunately WRK wasn’t in this group. Hedge funds that bet on WRK were disappointed as the stock returned .6% and underperformed the market. If you are interested in investing in large cap stocks, you should check out the top 15 hedge fund stocks as 13 of these outperformed the market.