Welltower Inc. (NYSE:WELL) investors should be aware of a decrease in enthusiasm from smart money lately. Our calculations also showed that WELL isn’t among the 30 most popular stocks among hedge funds.

What does the smart money think about Welltower Inc. (NYSE:WELL)? 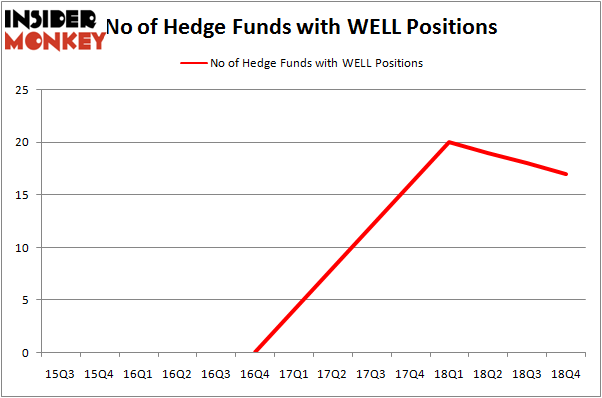 When looking at the institutional investors followed by Insider Monkey, Jim Simons’s Renaissance Technologies has the biggest position in Welltower Inc. (NYSE:WELL), worth close to $204.1 million, amounting to 0.2% of its total 13F portfolio. Coming in second is AEW Capital Management, managed by Jeffrey Furber, which holds a $166.1 million position; 5.2% of its 13F portfolio is allocated to the company. Other professional money managers with similar optimism consist of D. E. Shaw’s D E Shaw, Phill Gross and Robert Atchinson’s Adage Capital Management and Cliff Asness’s AQR Capital Management.

Seeing as Welltower Inc. (NYSE:WELL) has witnessed a decline in interest from the smart money, we can see that there lies a certain “tier” of money managers that slashed their entire stakes last quarter. Intriguingly, Charles Clough’s Clough Capital Partners dropped the largest stake of all the hedgies watched by Insider Monkey, comprising close to $9.8 million in stock. Dmitry Balyasny’s fund, Balyasny Asset Management, also dropped its stock, about $1.7 million worth. These bearish behaviors are intriguing to say the least, as total hedge fund interest dropped by 1 funds last quarter.

As you can see these stocks had an average of 23 hedge funds with bullish positions and the average amount invested in these stocks was $1009 million. That figure was $484 million in WELL’s case. Canadian Pacific Railway Limited (NYSE:CP) is the most popular stock in this table. On the other hand Perusahaan Perseroan (Persero) PT Telekomunikasi Indonesia Tbk (NYSE:TLK) is the least popular one with only 6 bullish hedge fund positions. Welltower Inc. (NYSE:WELL) is not the least popular stock in this group but hedge fund interest is still below average. This is a slightly negative signal and we’d rather spend our time researching stocks that hedge funds are piling on. Our calculations showed that top 15 most popular stocks among hedge funds returned 19.7% through March 15th and outperformed the S&P 500 ETF (SPY) by 6.6 percentage points. Unfortunately WELL wasn’t in this group. Hedge funds that bet on WELL were disappointed as the stock returned 12.6% and underperformed the market. If you are interested in investing in large cap stocks, you should check out the top 15 hedge fund stocks as 13 of these outperformed the market.

Is IQVIA Holdings, Inc. (IQV) A Good Stock To Buy?
Monthly Newsletter Strategy
Download a free copy of our newsletter and see the details inside!
Hedge Fund Resource Center
Related News
Ten of the Most Common Addictions 13 African Countries with the Largest White Population in 2018 6 Causes of Human Trafficking in Africa, India, and US
Billionaire Hedge Funds