Were Hedge Funds Right About Souring On USG Corporation (USG)?

Is USG Corporation (NYSE:USG) a good stock to buy right now? We at Insider Monkey like to examine what billionaires and hedge funds think of a company before doing days of research on it. Given their 2 and 20 payment structure, hedge funds have more incentives and resources than the average investor. The funds have access to expert networks and get tips from industry insiders. They also have numerous Ivy League graduates and MBAs. Like everyone else, hedge funds perform miserably at times, but their consensus picks have historically outperformed the market after risk adjustments.

Is USG Corporation (NYSE:USG) a bargain? The smart money is reducing their bets on the stock. The number of long hedge fund bets decreased by 1 lately. Our calculations also showed that USG isn’t among the 30 most popular stocks among hedge funds.

What have hedge funds been doing with USG Corporation (NYSE:USG)?

Heading into the first quarter of 2019, a total of 20 of the hedge funds tracked by Insider Monkey were long this stock, a change of -5% from one quarter earlier. On the other hand, there were a total of 22 hedge funds with a bullish position in USG a year ago. With hedge funds’ sentiment swirling, there exists a select group of notable hedge fund managers who were increasing their holdings meaningfully (or already accumulated large positions). 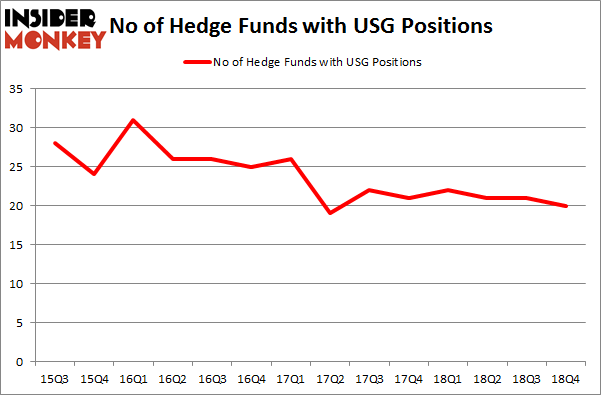 When looking at the institutional investors followed by Insider Monkey, Warren Buffett’s Berkshire Hathaway has the most valuable position in USG Corporation (NYSE:USG), worth close to $1.6638 billion, accounting for 0.9% of its total 13F portfolio. Sitting at the No. 2 spot is Magnetar Capital, managed by Alec Litowitz and Ross Laser, which holds a $154.7 million position; the fund has 3.8% of its 13F portfolio invested in the stock. Other members of the smart money with similar optimism include Israel Englander’s Millennium Management, Matthew Halbower’s Pentwater Capital Management and Robert Emil Zoellner’s Alpine Associates.

Due to the fact that USG Corporation (NYSE:USG) has witnessed declining sentiment from hedge fund managers, it’s easy to see that there is a sect of funds that slashed their positions entirely heading into Q3. It’s worth mentioning that James Dinan’s York Capital Management cut the largest stake of all the hedgies watched by Insider Monkey, worth close to $47.6 million in stock, and Paul Glazer’s Glazer Capital was right behind this move, as the fund dropped about $12.7 million worth. These bearish behaviors are intriguing to say the least, as total hedge fund interest fell by 1 funds heading into Q3.

As you can see these stocks had an average of 25.5 hedge funds with bullish positions and the average amount invested in these stocks was $684 million. That figure was $2262 million in USG’s case. Hill-Rom Holdings, Inc. (NYSE:HRC) is the most popular stock in this table. On the other hand The Toro Company (NYSE:TTC) is the least popular one with only 21 bullish hedge fund positions. Compared to these stocks USG Corporation (NYSE:USG) is even less popular than TTC. Our calculations showed that top 15 most popular stocks among hedge funds returned 21.3% through April 8th and outperformed the S&P 500 ETF (SPY) by more than 5 percentage points. Unfortunately USG wasn’t in this group. Hedge funds that bet on USG were disappointed as the stock returned 1.7% and underperformed the market. If you are interested in investing in large cap stocks, you should check out the top 15 hedge fund stocks as 12 of these outperformed the market.