Were Hedge Funds Right About Souring On TELUS Corporation (TU)?

Is TELUS Corporation (NYSE:TU) a healthy stock for your portfolio? Money managers are becoming less confident. The number of long hedge fund positions shrunk by 1 recently. Our calculations also showed that TU isn’t among the 30 most popular stocks among hedge funds. TU was in 11 hedge funds’ portfolios at the end of December. There were 12 hedge funds in our database with TU holdings at the end of the previous quarter.

What does the smart money think about TELUS Corporation (NYSE:TU)?

At Q4’s end, a total of 11 of the hedge funds tracked by Insider Monkey were bullish on this stock, a change of -8% from the previous quarter. On the other hand, there were a total of 12 hedge funds with a bullish position in TU a year ago. With the smart money’s sentiment swirling, there exists a select group of key hedge fund managers who were upping their stakes considerably (or already accumulated large positions). 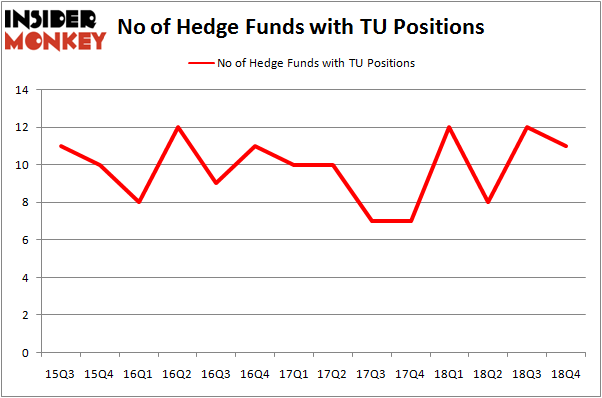 Among these funds, Renaissance Technologies held the most valuable stake in TELUS Corporation (NYSE:TU), which was worth $183.3 million at the end of the third quarter. On the second spot was D E Shaw which amassed $56.6 million worth of shares. Moreover, Arrowstreet Capital, GLG Partners, and Millennium Management were also bullish on TELUS Corporation (NYSE:TU), allocating a large percentage of their portfolios to this stock.

Due to the fact that TELUS Corporation (NYSE:TU) has witnessed falling interest from hedge fund managers, it’s easy to see that there were a few fund managers that slashed their positions entirely last quarter. It’s worth mentioning that Dmitry Balyasny’s Balyasny Asset Management cut the largest position of the “upper crust” of funds monitored by Insider Monkey, totaling about $0.7 million in stock. Alec Litowitz and Ross Laser’s fund, Magnetar Capital, also dropped its stock, about $0.2 million worth. These bearish behaviors are important to note, as aggregate hedge fund interest was cut by 1 funds last quarter.

As you can see these stocks had an average of 29.75 hedge funds with bullish positions and the average amount invested in these stocks was $757 million. That figure was $350 million in TU’s case. Discover Financial Services (NYSE:DFS) is the most popular stock in this table. On the other hand Willis Towers Watson Public Limited Company (NASDAQ:WLTW) is the least popular one with only 25 bullish hedge fund positions. Compared to these stocks TELUS Corporation (NYSE:TU) is even less popular than WLTW. Our calculations showed that top 15 most popular stocks among hedge funds returned 19.7% through March 15th and outperformed the S&P 500 ETF (SPY) by 6.6 percentage points. Unfortunately TU wasn’t in this group. Hedge funds that bet on TU were disappointed as the stock returned 10.6% and underperformed the market. If you are interested in investing in large cap stocks, you should check out the top 15 hedge fund stocks as 13 of these outperformed the market.