Were Hedge Funds Right About Souring on Pfizer?

Most investors tend to think that hedge funds and other asset managers are worthless, as they cannot beat even simple index fund portfolios. In fact, most people expect hedge funds to compete with and outperform the bull market that we have witnessed in recent years. However, hedge funds are generally partially hedged and aim at delivering attractive risk-adjusted returns rather than following the ups and downs of equity markets hoping that they will outperform the broader market. Our research shows that certain hedge funds do have great stock picking skills (and we can identify these hedge funds in advance pretty accurately), so let’s take a glance at the smart money sentiment towards Pfizer Inc. (NYSE:PFE).

Pfizer Inc. (NYSE:PFE) investors should be aware of a decrease in hedge fund interest lately. Our calculations also showed that PFE isn’t among the 30 most popular stocks among hedge funds.

Unlike some fund managers who are betting on Dow reaching 40000 in a year, our long-short investment strategy doesn’t rely on bull markets to deliver double digit returns. We only rely on hedge fund buy/sell signals. We’re going to take a look at the fresh hedge fund action encompassing Pfizer Inc. (NYSE:PFE).

What have hedge funds been doing with Pfizer Inc. (NYSE:PFE)?

At the end of the second quarter, a total of 52 of the hedge funds tracked by Insider Monkey were long this stock, a change of -2% from one quarter earlier. Below, you can check out the change in hedge fund sentiment towards PFE over the last 16 quarters. So, let’s see which hedge funds were among the top holders of the stock and which hedge funds were making big moves. 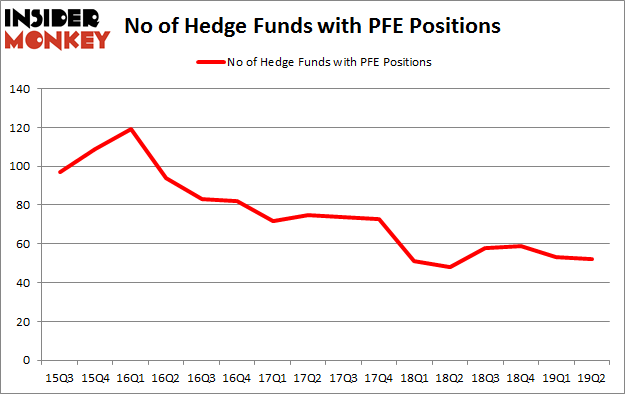 More specifically, Fisher Asset Management was the largest shareholder of Pfizer Inc. (NYSE:PFE), with a stake worth $1911.9 million reported as of the end of March. Trailing Fisher Asset Management was AQR Capital Management, which amassed a stake valued at $836.1 million. Diamond Hill Capital, Adage Capital Management, and Two Sigma Advisors were also very fond of the stock, giving the stock large weights in their portfolios.

Since Pfizer Inc. (NYSE:PFE) has witnessed falling interest from the smart money, it’s safe to say that there is a sect of money managers who were dropping their full holdings by the end of the second quarter. At the top of the heap, Aaron Cowen’s Suvretta Capital Management cut the biggest position of the 750 funds followed by Insider Monkey, worth close to $54.4 million in stock. David Costen Haley’s fund, HBK Investments, also dropped its stock, about $33.6 million worth. These moves are intriguing to say the least, as aggregate hedge fund interest was cut by 1 funds by the end of the second quarter.

Let’s check out hedge fund activity in other stocks – not necessarily in the same industry as Pfizer Inc. (NYSE:PFE) but similarly valued. We will take a look at Verizon Communications Inc. (NYSE:VZ), Cisco Systems, Inc. (NASDAQ:CSCO), Chevron Corporation (NYSE:CVX), and UnitedHealth Group Incorporated (NYSE:UNH). This group of stocks’ market caps are closest to PFE’s market cap.

As you can see these stocks had an average of 55.25 hedge funds with bullish positions and the average amount invested in these stocks was $3448 million. That figure was $4520 million in PFE’s case. UnitedHealth Group Incorporated (NYSE:UNH) is the most popular stock in this table. On the other hand Chevron Corporation (NYSE:CVX) is the least popular one with only 44 bullish hedge fund positions. Pfizer Inc. (NYSE:PFE) is not the least popular stock in this group but hedge fund interest is still below average. This is a slightly negative signal and we’d rather spend our time researching stocks that hedge funds are piling on. Our calculations showed that top 20 most popular stocks among hedge funds returned 24.4% in 2019 through September 30th and outperformed the S&P 500 ETF (SPY) by 4 percentage points. Unfortunately PFE wasn’t nearly as popular as these 20 stocks (hedge fund sentiment was quite bearish); PFE investors were disappointed as the stock returned -16.3% during the third quarter and underperformed the market. If you are interested in investing in large cap stocks with huge upside potential, you should check out the top 20 most popular stocks among hedge funds as many of these stocks already outperformed the market so far in 2019 or watch the video below.