News Corp (NASDAQ:NWSA) was in 23 hedge funds’ portfolios at the end of December. NWSA has seen a decrease in hedge fund interest lately. There were 30 hedge funds in our database with NWSA positions at the end of the previous quarter. Our calculations also showed that NWSA isn’t among the 30 most popular stocks among hedge funds. 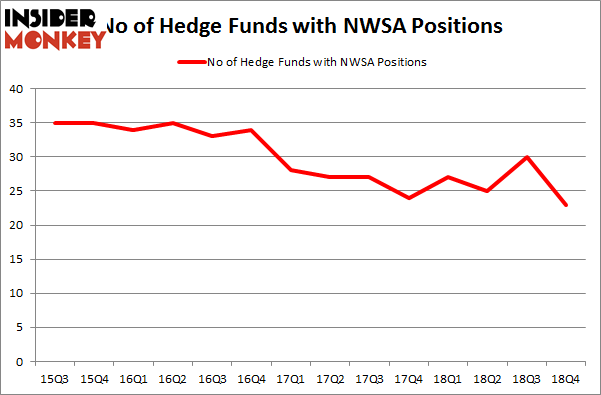 Of the funds tracked by Insider Monkey, Richard S. Pzena’s Pzena Investment Management has the number one position in News Corp (NASDAQ:NWSA), worth close to $258.1 million, comprising 1.5% of its total 13F portfolio. Coming in second is International Value Advisers, managed by Charles de Vaulx, which holds a $164.4 million position; 5% of its 13F portfolio is allocated to the company. Remaining members of the smart money that are bullish comprise D. E. Shaw’s D E Shaw, Cliff Asness’s AQR Capital Management and Douglas Dossey and Arthur Young’s Tensile Capital.

Due to the fact that News Corp (NASDAQ:NWSA) has witnessed declining sentiment from the entirety of the hedge funds we track, it’s safe to say that there exists a select few fund managers that slashed their positions entirely heading into Q3. Interestingly, Sander Gerber’s Hudson Bay Capital Management dropped the largest position of the 700 funds watched by Insider Monkey, valued at about $9.2 million in stock. Joel Greenblatt’s fund, Gotham Asset Management, also said goodbye to its stock, about $8.4 million worth. These moves are interesting, as total hedge fund interest was cut by 7 funds heading into Q3.

As you can see these stocks had an average of 24.5 hedge funds with bullish positions and the average amount invested in these stocks was $427 million. That figure was $559 million in NWSA’s case. RingCentral Inc (NYSE:RNG) is the most popular stock in this table. On the other hand Public Joint-Stock Company Mobile TeleSystems (NYSE:MBT) is the least popular one with only 12 bullish hedge fund positions. News Corp (NASDAQ:NWSA) is not the least popular stock in this group but hedge fund interest is still below average. This is a slightly negative signal and we’d rather spend our time researching stocks that hedge funds are piling on. Our calculations showed that top 15 most popular stocks among hedge funds returned 19.7% through March 15th and outperformed the S&P 500 ETF (SPY) by 6.6 percentage points. Unfortunately NWSA wasn’t in this group. Hedge funds that bet on NWSA were disappointed as the stock returned 12.3% and underperformed the market. If you are interested in investing in large cap stocks, you should check out the top 15 hedge fund stocks as 13 of these outperformed the market.

Is Aramark (ARMK) A Good Stock To Buy According To Hedge Funds?

Did Hedge Funds Drop The Ball On Tiffany & Co. (TIF) ?

Best Performing Hedge Funds Strategy
Download a free copy of our newsletter and see the details inside!
Hedge Fund Resource Center
Related News
Hedge Funds Are Buying News Corp NWSA) 11 Worst Tech Mergers and Acquisitions Ever 6 Corporations Who Own 90% Of The News Media Is News Corp (NWSA) a Good Stock To Buy? Did Altalis Capital Partners Make The Right Move Cutting Exposure To News Corp (NWSA), DISH Network Corp (DISH) & Two Other Stocks? 10 Most Successful Immigrants in USA and Their Companies News Corp (NWSA): Are Hedge Funds Right About This Stock? 15 Most Physically Demanding Olympic Sports Hedge Funds Have Never Been This Bullish On Visa Inc (V) Ten of the Most Common Addictions
Billionaire Hedge Funds