Were Hedge Funds Right About Souring On McDonald’s Corporation (MCD)?

Many investors, including Paul Tudor Jones or Stan Druckenmiller, have been saying before last year’s Q4 market crash that the stock market is overvalued due to a low interest rate environment that leads to companies swapping their equity for debt and focusing mostly on short-term performance such as beating the quarterly earnings estimates. In the first half of 2019, most investors recovered all of their Q4 losses as sentiment shifted and optimism dominated the US China trade negotiations. Nevertheless, many of the stocks that delivered strong returns in the first half still sport strong fundamentals and their gains were more related to the general market sentiment rather than their individual performance and hedge funds kept their bullish stance. In this article we will find out how hedge fund sentiment to McDonald’s Corporation (NYSE:MCD) changed recently.

Is McDonald’s Corporation (NYSE:MCD) a healthy stock for your portfolio? The best stock pickers are getting less optimistic. The number of long hedge fund bets decreased by 3 lately. Our calculations also showed that MCD isn’t among the 30 most popular stocks among hedge funds (see the video below). MCD was in 49 hedge funds’ portfolios at the end of the third quarter of 2019. There were 52 hedge funds in our database with MCD holdings at the end of the previous quarter.

In the eyes of most market participants, hedge funds are seen as worthless, outdated financial tools of years past. While there are over 8000 funds with their doors open at the moment, Our researchers choose to focus on the aristocrats of this club, around 750 funds. These investment experts oversee bulk of all hedge funds’ total capital, and by keeping track of their top stock picks, Insider Monkey has identified various investment strategies that have historically outpaced the broader indices. Insider Monkey’s flagship short hedge fund strategy surpassed the S&P 500 short ETFs by around 20 percentage points per year since its inception in May 2014. Our portfolio of short stocks lost 27.8% since February 2017 (through November 21st) even though the market was up more than 39% during the same period. We just shared a list of 7 short targets in our latest quarterly update .

Unlike the largest US hedge funds that are convinced Dow will soar past 40,000 or the world’s most bearish hedge fund that’s more convinced than ever that a crash is coming, our long-short investment strategy doesn’t rely on bull or bear markets to deliver double digit returns. We only rely on the best performing hedge funds‘ buy/sell signals. We’re going to take a gander at the recent hedge fund action encompassing McDonald’s Corporation (NYSE:MCD).

Heading into the fourth quarter of 2019, a total of 49 of the hedge funds tracked by Insider Monkey held long positions in this stock, a change of -6% from the previous quarter. By comparison, 38 hedge funds held shares or bullish call options in MCD a year ago. With hedgies’ capital changing hands, there exists a few key hedge fund managers who were adding to their holdings significantly (or already accumulated large positions). 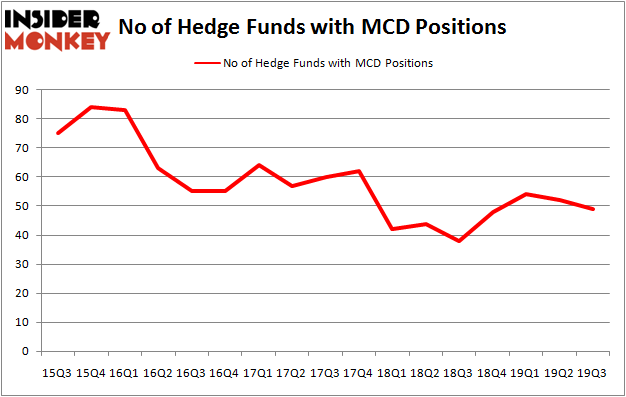 The largest stake in McDonald’s Corporation (NYSE:MCD) was held by D E Shaw, which reported holding $425.1 million worth of stock at the end of September. It was followed by Two Sigma Advisors with a $419.1 million position. Other investors bullish on the company included AQR Capital Management, Adage Capital Management, and Arrowstreet Capital. In terms of the portfolio weights assigned to each position Emerson Point Capital allocated the biggest weight to McDonald’s Corporation (NYSE:MCD), around 3.49% of its portfolio. ZWEIG DIMENNA PARTNERS is also relatively very bullish on the stock, earmarking 2.53 percent of its 13F equity portfolio to MCD.

Seeing as McDonald’s Corporation (NYSE:MCD) has experienced a decline in interest from the entirety of the hedge funds we track, it’s safe to say that there is a sect of funds who were dropping their entire stakes by the end of the third quarter. Interestingly, Dmitry Balyasny’s Balyasny Asset Management sold off the biggest investment of the 750 funds tracked by Insider Monkey, worth about $130.8 million in stock. Brandon Haley’s fund, Holocene Advisors, also dropped its stock, about $130.7 million worth. These bearish behaviors are intriguing to say the least, as total hedge fund interest dropped by 3 funds by the end of the third quarter.

As you can see these stocks had an average of 34.25 hedge funds with bullish positions and the average amount invested in these stocks was $3222 million. That figure was $2076 million in MCD’s case. Citigroup Inc. (NYSE:C) is the most popular stock in this table. On the other hand The Unilever Group (NYSE:UL) is the least popular one with only 14 bullish hedge fund positions. McDonald’s Corporation (NYSE:MCD) is not the most popular stock in this group but hedge fund interest is still above average. This is a slightly positive signal but we’d rather spend our time researching stocks that hedge funds are piling on. Our calculations showed that top 20 most popular stocks among hedge funds returned 34.7% in 2019 through November 22nd and outperformed the S&P 500 ETF (SPY) by 8.5 percentage points. Unfortunately MCD wasn’t nearly as popular as these 20 stocks and hedge funds that were betting on MCD were disappointed as the stock returned -10% during the fourth quarter (through 11/22) and underperformed the market. If you are interested in investing in large cap stocks with huge upside potential, you should check out the top 20 most popular stocks among hedge funds as many of these stocks already outperformed the market so far this year.