Hedge funds are not perfect. They have their bad picks just like everyone else. Facebook, a stock hedge funds have loved, lost nearly 40% of its value at one point in 2018. Although hedge funds are not perfect, their consensus picks do deliver solid returns, however. Our data show the top 15 S&P 500 stocks among hedge funds at the end of December 2018 yielded an average return of 19.7% year-to-date, vs. a gain of 13.1% for the S&P 500 Index. Because hedge funds have a lot of resources and their consensus picks do well, we pay attention to what they think. In this article, we analyze what the elite funds think of LyondellBasell Industries NV (NYSE:LYB).

Is LyondellBasell Industries NV (NYSE:LYB) ready to rally soon? The smart money is getting less optimistic. The number of long hedge fund positions dropped by 2 in recent months. Our calculations also showed that LYB isn’t among the 30 most popular stocks among hedge funds. LYB was in 37 hedge funds’ portfolios at the end of December. There were 39 hedge funds in our database with LYB positions at the end of the previous quarter. 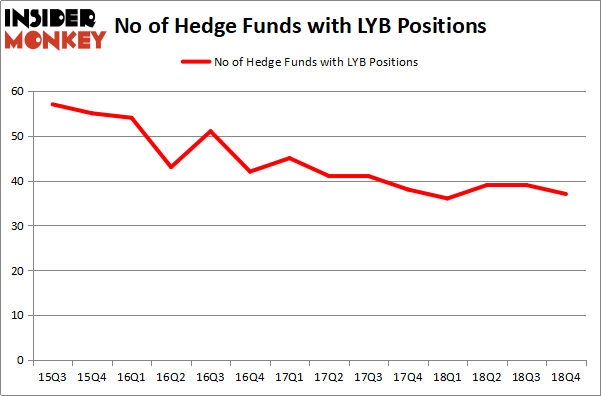 The largest stake in LyondellBasell Industries NV (NYSE:LYB) was held by AQR Capital Management, which reported holding $445.6 million worth of stock at the end of September. It was followed by Arrowstreet Capital with a $183.4 million position. Other investors bullish on the company included Two Sigma Advisors, Renaissance Technologies, and D E Shaw.

Because LyondellBasell Industries NV (NYSE:LYB) has faced a decline in interest from the aggregate hedge fund industry, it’s safe to say that there were a few funds that elected to cut their entire stakes in the third quarter. At the top of the heap, Zach Schreiber’s Point State Capital cut the largest stake of all the hedgies followed by Insider Monkey, totaling about $258.3 million in stock. Kevin Michael Ulrich and Anthony Davis’s fund, Anchorage Advisors, also cut its stock, about $70.4 million worth. These transactions are interesting, as total hedge fund interest fell by 2 funds in the third quarter.

As you can see these stocks had an average of 27.25 hedge funds with bullish positions and the average amount invested in these stocks was $1247 million. That figure was $1268 million in LYB’s case. HP Inc. (NYSE:HPQ) is the most popular stock in this table. On the other hand Koninklijke Philips NV (NYSE:PHG) is the least popular one with only 14 bullish hedge fund positions. LyondellBasell Industries NV (NYSE:LYB) is not the most popular stock in this group but hedge fund interest is still above average. This is a slightly positive signal but we’d rather spend our time researching stocks that hedge funds are piling on. Our calculations showed that top 15 most popular stocks among hedge funds returned 19.7% through March 15th and outperformed the S&P 500 ETF (SPY) by 6.6 percentage points. Unfortunately LYB wasn’t in this group. Hedge funds that bet on LYB were disappointed as the stock returned 5.9% and underperformed the market. If you are interested in investing in large cap stocks, you should check out the top 15 hedge fund stocks as 13 of these outperformed the market.