The Insider Monkey team has completed processing the quarterly 13F filings for the June quarter submitted by the hedge funds and other money managers included in our extensive database. Most hedge fund investors experienced strong gains on the back of a strong market performance, which certainly propelled them to adjust their equity holdings so as to maintain the desired risk profile. As a result, the relevancy of these public filings and their content is indisputable, as they may reveal numerous high-potential stocks. The following article will discuss the smart money sentiment towards CVR Partners LP (NYSE:UAN).

Is CVR Partners LP (NYSE:UAN) a good stock to buy now? Prominent investors are getting less bullish. The number of long hedge fund bets shrunk by 1 in recent months. Our calculations also showed that UAN isn’t among the 30 most popular stocks among hedge funds (see the video below). 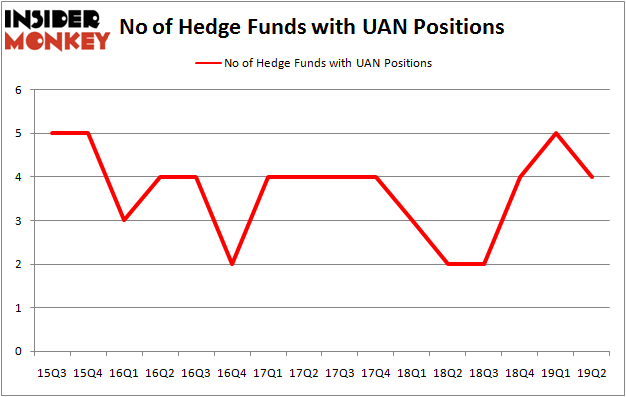 Unlike other investors who track every movement of the 25 largest hedge funds, our long-short investment strategy relies on hedge fund buy/sell signals given by the 100 best performing hedge funds. Let’s take a peek at the fresh hedge fund action regarding CVR Partners LP (NYSE:UAN).

What have hedge funds been doing with CVR Partners LP (NYSE:UAN)?

When looking at the institutional investors followed by Insider Monkey, Raging Capital Management, managed by William C. Martin, holds the largest position in CVR Partners LP (NYSE:UAN). Raging Capital Management has a $36.7 million position in the stock, comprising 6.2% of its 13F portfolio. The second most bullish fund manager is Matthew Barrett of Glendon Capital Management, with a $9.6 million position; the fund has 2.2% of its 13F portfolio invested in the stock. Some other peers that hold long positions include Ken Griffin’s Citadel Investment Group,  and Renaissance Technologies .

We view hedge fund activity in the stock unfavorable, but in this case there was only a single hedge fund selling its entire position: Arrowstreet Capital. One hedge fund selling its entire position doesn’t always imply a bearish intent. Theoretically a hedge fund may decide to sell a promising position in order to invest the proceeds in a more promising idea. However, we don’t think this is the case in this case because none of the 750+ hedge funds tracked by Insider Monkey identified UAN as a viable investment and initiated a position in the stock.

As you can see these stocks had an average of 6.75 hedge funds with bullish positions and the average amount invested in these stocks was $33 million. That figure was $46 million in UAN’s case. Atlantic Capital Bancshares, Inc. (NASDAQ:ACBI) is the most popular stock in this table. On the other hand American National BankShares Inc (NASDAQ:AMNB) is the least popular one with only 2 bullish hedge fund positions. CVR Partners LP (NYSE:UAN) is not the least popular stock in this group but hedge fund interest is still below average. This is a slightly negative signal and we’d rather spend our time researching stocks that hedge funds are piling on. Our calculations showed that top 20 most popular stocks among hedge funds returned 24.4% in 2019 through September 30th and outperformed the S&P 500 ETF (SPY) by 4 percentage points. Unfortunately UAN wasn’t nearly as popular as these 20 stocks (hedge fund sentiment was quite bearish); UAN investors were disappointed as the stock returned -1.7% during the third quarter and underperformed the market. If you are interested in investing in large cap stocks with huge upside potential, you should check out the top 20 most popular stocks among hedge funds as many of these stocks already outperformed the market so far in 2019.