Hedge fund managers like David Einhorn, Bill Ackman, or Carl Icahn became billionaires through reaping large profits for their investors, which is why piggybacking their stock picks may provide us with significant returns as well. Many hedge funds, like Paul Singer’s Elliott Management, are pretty secretive, but we can still get some insights by analyzing their quarterly 13F filings. One of the most fertile grounds for large abnormal returns is hedge funds’ most popular small-cap picks, which are not so widely followed and often trade at a discount to their intrinsic value. In this article we will check out hedge fund activity in another small-cap stock: Compania Cervecerias Unidas S.A. (NYSE:CCU).

Is Compania Cervecerias Unidas S.A. (NYSE:CCU) going to take off soon? Money managers are getting less optimistic. The number of long hedge fund bets were trimmed by 5 recently. Our calculations also showed that ccu isn’t among the 30 most popular stocks among hedge funds. CCU was in 9 hedge funds’ portfolios at the end of December. There were 14 hedge funds in our database with CCU positions at the end of the previous quarter.

At the end of the fourth quarter, a total of 9 of the hedge funds tracked by Insider Monkey held long positions in this stock, a change of -36% from the previous quarter. Below, you can check out the change in hedge fund sentiment towards CCU over the last 14 quarters. So, let’s see which hedge funds were among the top holders of the stock and which hedge funds were making big moves. 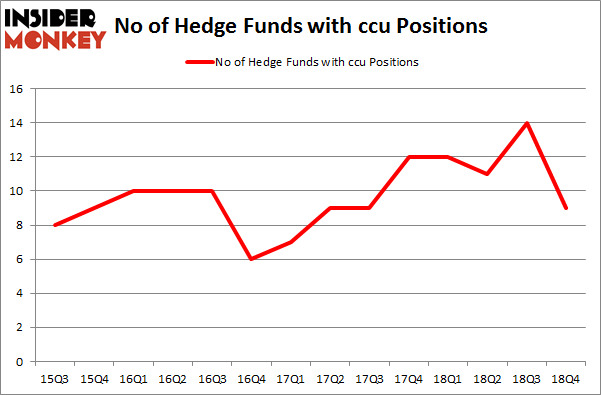 The largest stake in Compania Cervecerias Unidas S.A. (NYSE:CCU) was held by Arrowstreet Capital, which reported holding $25.6 million worth of stock at the end of September. It was followed by International Value Advisers with a $17.9 million position. Other investors bullish on the company included AQR Capital Management, Millennium Management, and Renaissance Technologies.

Due to the fact that Compania Cervecerias Unidas S.A. (NYSE:CCU) has faced a decline in interest from the aggregate hedge fund industry, we can see that there lies a certain “tier” of hedgies that slashed their entire stakes by the end of the third quarter. It’s worth mentioning that Noam Gottesman’s GLG Partners sold off the largest stake of all the hedgies watched by Insider Monkey, totaling an estimated $5.4 million in stock. Robert Joseph Caruso’s fund, Select Equity Group, also cut its stock, about $4 million worth. These bearish behaviors are important to note, as total hedge fund interest fell by 5 funds by the end of the third quarter.

As you can see these stocks had an average of 17.25 hedge funds with bullish positions and the average amount invested in these stocks was $214 million. That figure was $77 million in CCU’s case. New Relic Inc (NYSE:NEWR) is the most popular stock in this table. On the other hand PLDT Inc. (NYSE:PHI) is the least popular one with only 5 bullish hedge fund positions. Compania Cervecerias Unidas S.A. (NYSE:CCU) is not the least popular stock in this group but hedge fund interest is still below average. This is a slightly negative signal and we’d rather spend our time researching stocks that hedge funds are piling on. Our calculations showed that top 15 most popular stocks among hedge funds returned 21.3% through April 8th and outperformed the S&P 500 ETF (SPY) by more than 5 percentage points. Unfortunately CCU wasn’t in this group. Hedge funds that bet on CCU were disappointed as the stock returned 15.3% and underperformed the market. If you are interested in investing in large cap stocks, you should check out the top 15 hedge fund stocks as 12 of these outperformed the market.