Were Hedge Funds Right About Souring On Cerner Corporation (CERN)?

“Market conditions are changing. The continued rise in interest rates suggests we are in the early stages of a bond bear market, which could intensify as central banks withdraw liquidity. The receding tide of liquidity will start to reveal more rocks beyond what has been exposed in emerging markets so far, and the value of a value discipline will be in avoiding the biggest capital-destroying rocks. If a rock emerges on the crowded shore of U.S. momentum, it could result in a major liquidity challenge, as momentum is often most intense on the downside as a crowded trade reverses. So investors are facing a large potential trade-off right now: continue to bet on the current dominance of momentum and the S&P 500, or bet on change and take an active value bet in names with attractive value and optionality, but with negative momentum,” said Clearbridge Investments in its market commentary. We aren’t sure whether long-term interest rates will top 5% and value stocks outperform growth, but we follow hedge fund investor letters to understand where the markets and stocks might be going. This article will lay out and discuss the hedge fund and institutional investor sentiment towards Cerner Corporation (NASDAQ:CERN).

Cerner Corporation (NASDAQ:CERN) investors should be aware of a decrease in activity from the world’s largest hedge funds recently. CERN was in 22 hedge funds’ portfolios at the end of December. There were 25 hedge funds in our database with CERN positions at the end of the previous quarter. Our calculations also showed that CERN isn’t among the 30 most popular stocks among hedge funds.

What does the smart money think about Cerner Corporation (NASDAQ:CERN)? 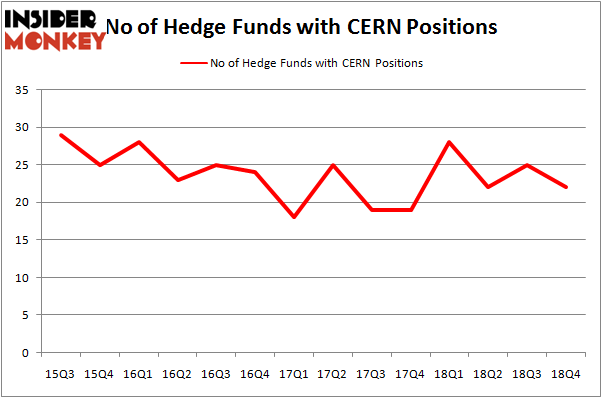 When looking at the institutional investors followed by Insider Monkey, Generation Investment Management, managed by David Blood and Al Gore, holds the biggest position in Cerner Corporation (NASDAQ:CERN). Generation Investment Management has a $330.4 million position in the stock, comprising 2.8% of its 13F portfolio. Sitting at the No. 2 spot is Arrowstreet Capital, managed by Peter Rathjens, Bruce Clarke and John Campbell, which holds a $100.2 million position; the fund has 0.3% of its 13F portfolio invested in the stock. Some other peers that are bullish comprise Arthur B Cohen and Joseph Healey’s Healthcor Management LP, Israel Englander’s Millennium Management and Jim Simons’s Renaissance Technologies.

Since Cerner Corporation (NASDAQ:CERN) has witnessed falling interest from the smart money, it’s safe to say that there is a sect of funds who sold off their entire stakes heading into Q3. Interestingly, Steve Cohen’s Point72 Asset Management said goodbye to the largest stake of the 700 funds followed by Insider Monkey, worth close to $16.2 million in stock, and Brian Ashford-Russell and Tim Woolley’s Polar Capital was right behind this move, as the fund dumped about $3.3 million worth. These bearish behaviors are important to note, as aggregate hedge fund interest fell by 3 funds heading into Q3.

As you can see these stocks had an average of 22.75 hedge funds with bullish positions and the average amount invested in these stocks was $956 million. That figure was $643 million in CERN’s case. Synchrony Financial (NYSE:SYF) is the most popular stock in this table. On the other hand Shinhan Financial Group Co., Ltd. (NYSE:SHG) is the least popular one with only 7 bullish hedge fund positions. Cerner Corporation (NASDAQ:CERN) is not the least popular stock in this group but hedge fund interest is still below average. This is a slightly negative signal and we’d rather spend our time researching stocks that hedge funds are piling on. Our calculations showed that top 15 most popular stocks among hedge funds returned 19.7% through March 15th and outperformed the S&P 500 ETF (SPY) by 6.6 percentage points. Unfortunately CERN wasn’t in this group. Hedge funds that bet on CERN were disappointed as the stock returned 10.6% and underperformed the market. If you are interested in investing in large cap stocks, you should check out the top 15 hedge fund stocks as 13 of these outperformed the market.