Were Hedge Funds Right About Souring On CBS Corporation (CBS)?

Russell 2000 ETF (IWM) lagged the larger S&P 500 ETF (SPY) by more than 10 percentage points since the end of the third quarter of 2018 as investors first worried over the possible ramifications of rising interest rates and the escalation of the trade war with China. The hedge funds and institutional investors we track typically invest more in smaller-cap stocks than an average investor (i.e. only about 60% S&P 500 constituents were among the 500 most popular stocks among hedge funds), and we have seen data that shows those funds paring back their overall exposure. Those funds cutting positions in small-caps is one reason why volatility has increased. In the following paragraphs, we take a closer look at what hedge funds and prominent investors think of CBS Corporation (NYSE:CBS) and see how the stock is affected by the recent hedge fund activity.

CBS Corporation (NYSE:CBS) was in 49 hedge funds’ portfolios at the end of September. CBS investors should pay attention to a decrease in hedge fund sentiment in recent months. There were 50 hedge funds in our database with CBS holdings at the end of the previous quarter. Our calculations also showed that CBS isn’t among the 30 most popular stocks among hedge funds.

In the 21st century investor’s toolkit there are dozens of formulas market participants put to use to evaluate publicly traded companies. A duo of the most innovative formulas are hedge fund and insider trading indicators. Our experts have shown that, historically, those who follow the best picks of the best fund managers can outperform their index-focused peers by a solid margin (see the details here).

Unlike the largest US hedge funds that are convinced Dow will soar past 40,000 or the world’s most bearish hedge fund that’s more convinced than ever that a crash is coming, our long-short investment strategy doesn’t rely on bull or bear markets to deliver double digit returns. We only rely on the best performing hedge funds‘ buy/sell signals. Let’s take a glance at the new hedge fund action surrounding CBS Corporation (NYSE:CBS).

What have hedge funds been doing with CBS Corporation (NYSE:CBS)? 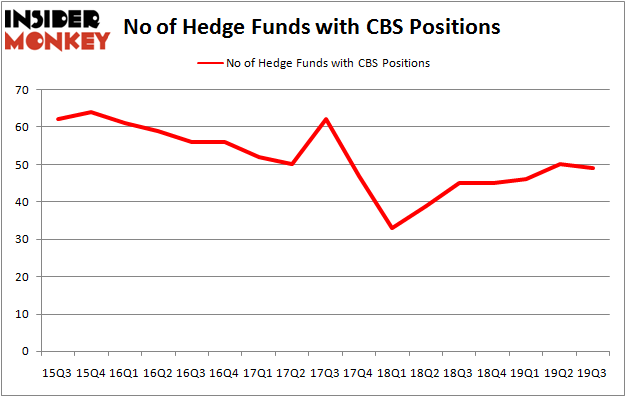 According to publicly available hedge fund and institutional investor holdings data compiled by Insider Monkey, Seth Klarman’s Baupost Group has the most valuable position in CBS Corporation (NYSE:CBS), worth close to $484.4 million, accounting for 5.5% of its total 13F portfolio. Coming in second is Citadel Investment Group, led by Ken Griffin, holding a $247.5 million position; the fund has 0.1% of its 13F portfolio invested in the stock. Remaining peers that hold long positions contain Larry Robbins’s Glenview Capital, Cliff Asness’s AQR Capital Management and Benjamin Pass’s TOMS Capital. In terms of the portfolio weights assigned to each position TOMS Capital allocated the biggest weight to CBS Corporation (NYSE:CBS), around 23.37% of its portfolio. Hawkeye Capital is also relatively very bullish on the stock, designating 15.99 percent of its 13F equity portfolio to CBS.

Due to the fact that CBS Corporation (NYSE:CBS) has experienced a decline in interest from the aggregate hedge fund industry, we can see that there exists a select few hedgies that slashed their positions entirely last quarter. It’s worth mentioning that Renaissance Technologies sold off the largest stake of the “upper crust” of funds watched by Insider Monkey, comprising about $23.5 million in stock, and James Dinan’s York Capital Management was right behind this move, as the fund cut about $18.3 million worth. These moves are important to note, as total hedge fund interest was cut by 1 funds last quarter.

Let’s now take a look at hedge fund activity in other stocks – not necessarily in the same industry as CBS Corporation (NYSE:CBS) but similarly valued. We will take a look at POSCO (NYSE:PKX), Plains All American Pipeline, L.P. (NYSE:PAA), Extra Space Storage, Inc. (NYSE:EXR), and Hasbro, Inc. (NASDAQ:HAS). This group of stocks’ market valuations are similar to CBS’s market valuation.