Hedge Funds and other institutional investors have just completed filing their 13Fs with the Securities and Exchange Commission, revealing their equity portfolios as of the end of June. At Insider Monkey, we follow nearly 750 active hedge funds and notable investors and by analyzing their 13F filings, we can determine the stocks that they are collectively bullish on. One of their picks is Canadian Natural Resources Limited (NYSE:CNQ), so let’s take a closer look at the sentiment that surrounds it in the current quarter.

Canadian Natural Resources Limited (NYSE:CNQ) investors should be aware of a decrease in support from the world’s most elite money managers of late. CNQ was in 24 hedge funds’ portfolios at the end of June. There were 29 hedge funds in our database with CNQ positions at the end of the previous quarter. Our calculations also showed that CNQ isn’t among the 30 most popular stocks among hedge funds (see the video below).

Unlike some fund managers who are betting on Dow reaching 40000 in a year, our long-short investment strategy doesn’t rely on bull markets to deliver double digit returns. We only rely on hedge fund buy/sell signals. We’re going to take a glance at the fresh hedge fund action encompassing Canadian Natural Resources Limited (NYSE:CNQ).

What have hedge funds been doing with Canadian Natural Resources Limited (NYSE:CNQ)?

At the end of the second quarter, a total of 24 of the hedge funds tracked by Insider Monkey were bullish on this stock, a change of -17% from the previous quarter. By comparison, 23 hedge funds held shares or bullish call options in CNQ a year ago. With hedgies’ positions undergoing their usual ebb and flow, there exists a few noteworthy hedge fund managers who were adding to their holdings considerably (or already accumulated large positions). 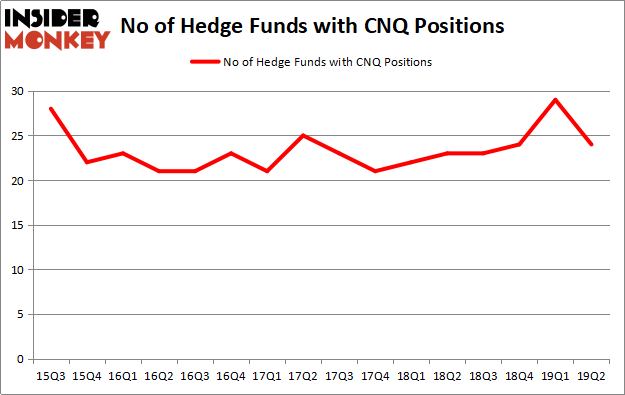 According to publicly available hedge fund and institutional investor holdings data compiled by Insider Monkey, Millennium Management, managed by Israel Englander, holds the biggest position in Canadian Natural Resources Limited (NYSE:CNQ). Millennium Management has a $82.4 million position in the stock, comprising 0.1% of its 13F portfolio. The second largest stake is held by Brian Ashford-Russell and Tim Woolley of Polar Capital, with a $73.4 million position; the fund has 0.6% of its 13F portfolio invested in the stock. Other members of the smart money with similar optimism comprise Thomas E. Claugus’s GMT Capital, D. E. Shaw’s D E Shaw and Alex Snow’s Lansdowne Partners.

Since Canadian Natural Resources Limited (NYSE:CNQ) has witnessed falling interest from the aggregate hedge fund industry, it’s easy to see that there was a specific group of fund managers that elected to cut their full holdings last quarter. Intriguingly, Peter Rathjens, Bruce Clarke and John Campbell’s Arrowstreet Capital cut the biggest stake of the 750 funds watched by Insider Monkey, totaling about $71.4 million in stock, and Cliff Asness’s AQR Capital Management was right behind this move, as the fund said goodbye to about $52.3 million worth. These bearish behaviors are intriguing to say the least, as aggregate hedge fund interest dropped by 5 funds last quarter.

As you can see these stocks had an average of 29.75 hedge funds with bullish positions and the average amount invested in these stocks was $834 million. That figure was $425 million in CNQ’s case. Square, Inc. (NYSE:SQ) is the most popular stock in this table. On the other hand Canon Inc. (NYSE:CAJ) is the least popular one with only 6 bullish hedge fund positions. Canadian Natural Resources Limited (NYSE:CNQ) is not the least popular stock in this group but hedge fund interest is still below average. This is a slightly negative signal and we’d rather spend our time researching stocks that hedge funds are piling on. Our calculations showed that top 20 most popular stocks among hedge funds returned 24.4% in 2019 through September 30th and outperformed the S&P 500 ETF (SPY) by 4 percentage points. Unfortunately CNQ wasn’t nearly as popular as these 20 stocks (hedge fund sentiment was quite bearish); CNQ investors were disappointed as the stock returned -0.1% during the third quarter and underperformed the market. If you are interested in investing in large cap stocks with huge upside potential, you should check out the top 20 most popular stocks among hedge funds as many of these stocks already outperformed the market so far in 2019.