Were Hedge Funds Right About Souring On Avangrid, Inc. (AGR) ?

Is Avangrid, Inc. (NYSE:AGR) ready to rally soon? The smart money is taking a pessimistic view. The number of long hedge fund bets went down by 5 lately. Our calculations also showed that AGR isn’t among the 30 most popular stocks among hedge funds. AGR was in 13 hedge funds’ portfolios at the end of December. There were 18 hedge funds in our database with AGR holdings at the end of the previous quarter.

How have hedgies been trading Avangrid, Inc. (NYSE:AGR)? 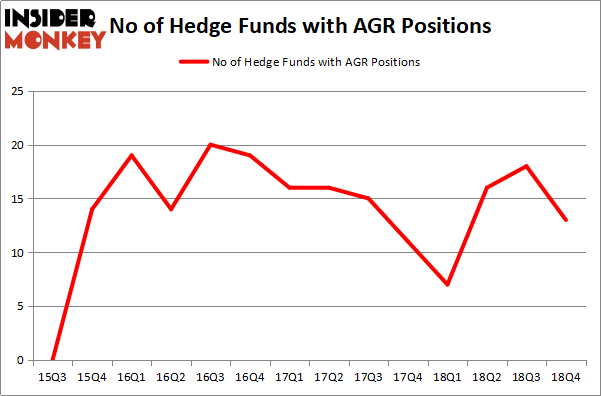 Seeing as Avangrid, Inc. (NYSE:AGR) has experienced declining sentiment from hedge fund managers, it’s safe to say that there is a sect of hedge funds that elected to cut their full holdings heading into Q3. It’s worth mentioning that Zilvinas Mecelis’s Covalis Capital sold off the biggest investment of all the hedgies watched by Insider Monkey, valued at an estimated $21.8 million in stock, and Dmitry Balyasny’s Balyasny Asset Management was right behind this move, as the fund said goodbye to about $13.9 million worth. These bearish behaviors are intriguing to say the least, as total hedge fund interest dropped by 5 funds heading into Q3.

As you can see these stocks had an average of 32.75 hedge funds with bullish positions and the average amount invested in these stocks was $862 million. That figure was $348 million in AGR’s case. IAC/InterActiveCorp (NASDAQ:IAC) is the most popular stock in this table. On the other hand CGI Inc. (NYSE:GIB) is the least popular one with only 17 bullish hedge fund positions. Compared to these stocks Avangrid, Inc. (NYSE:AGR) is even less popular than GIB. Considering that hedge funds aren’t fond of this stock in relation to other companies analyzed in this article, it may be a good idea to analyze it in detail and understand why the smart money isn’t behind this stock. This isn’t necessarily bad news. Although it is possible that hedge funds may think the stock is overpriced and view the stock as a short candidate, they may not be very familiar with the bullish thesis. Our calculations showed that top 15 most popular stocks among hedge funds returned 19.7% through March 15th and outperformed the S&P 500 ETF (SPY) by 6.6 percentage points. Unfortunately AGR wasn’t in this group. Hedge funds that bet on AGR were disappointed as the stock lost .2% and underperformed the market. If you are interested in investing in large cap stocks, you should check out the top 15 hedge fund stocks as 13 of these outperformed the market.