The Insider Monkey team has completed processing the quarterly 13F filings for the June quarter submitted by the hedge funds and other money managers included in our extensive database. Most hedge fund investors experienced strong gains on the back of a strong market performance, which certainly propelled them to adjust their equity holdings so as to maintain the desired risk profile. As a result, the relevancy of these public filings and their content is indisputable, as they may reveal numerous high-potential stocks. The following article will discuss the smart money sentiment towards Aurinia Pharmaceuticals Inc (NASDAQ:AUPH).

Is Aurinia Pharmaceuticals Inc (NASDAQ:AUPH) an exceptional investment right now? The smart money is in a pessimistic mood. The number of long hedge fund bets were trimmed by 2 lately. Our calculations also showed that AUPH isn’t among the 30 most popular stocks among hedge funds (see the video below). AUPH was in 11 hedge funds’ portfolios at the end of June. There were 13 hedge funds in our database with AUPH positions at the end of the previous quarter.

To the average investor there are several methods stock market investors use to evaluate publicly traded companies. Two of the most under-the-radar methods are hedge fund and insider trading signals. We have shown that, historically, those who follow the best picks of the elite money managers can outpace the S&P 500 by a significant amount (see the details here).

In addition to following the biggest hedge funds for investment ideas, we also share stock pitches from conferences, investor letters and other sources  like this one where the fund manager is talking about two under the radar 1000% return potential stocks: first one in internet infrastructure and the second in the heart of advertising market. We use hedge fund buy/sell signals to determine whether to conduct in-depth analysis of these stock ideas which take days. We’re going to check out the key hedge fund action encompassing Aurinia Pharmaceuticals Inc (NASDAQ:AUPH).

At Q2’s end, a total of 11 of the hedge funds tracked by Insider Monkey were bullish on this stock, a change of -15% from the previous quarter. By comparison, 8 hedge funds held shares or bullish call options in AUPH a year ago. With hedgies’ sentiment swirling, there exists a select group of key hedge fund managers who were increasing their holdings substantially (or already accumulated large positions). 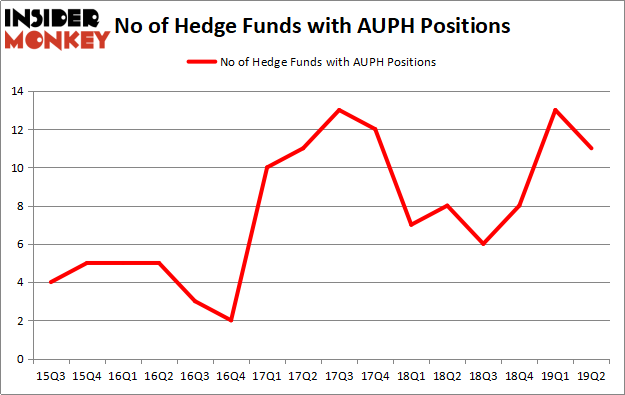 Among these funds, Consonance Capital Management held the most valuable stake in Aurinia Pharmaceuticals Inc (NASDAQ:AUPH), which was worth $27.8 million at the end of the second quarter. On the second spot was OrbiMed Advisors which amassed $23.2 million worth of shares. Moreover, Polar Capital, Vivo Capital, and Hudson Bay Capital Management were also bullish on Aurinia Pharmaceuticals Inc (NASDAQ:AUPH), allocating a large percentage of their portfolios to this stock.

Judging by the fact that Aurinia Pharmaceuticals Inc (NASDAQ:AUPH) has faced declining sentiment from hedge fund managers, we can see that there is a sect of hedgies that slashed their entire stakes in the second quarter. Interestingly, Jeremy Green’s Redmile Group dropped the biggest investment of the 750 funds watched by Insider Monkey, totaling close to $2.1 million in stock. John Overdeck and David Siegel’s fund, Two Sigma Advisors, also dumped its stock, about $0.1 million worth. These bearish behaviors are important to note, as aggregate hedge fund interest fell by 2 funds in the second quarter.

As you can see these stocks had an average of 8 hedge funds with bullish positions and the average amount invested in these stocks was $29 million. That figure was $94 million in AUPH’s case. Anika Therapeutics, Inc. (NASDAQ:ANIK) is the most popular stock in this table. On the other hand Independence Holding Company (NYSE:IHC) is the least popular one with only 3 bullish hedge fund positions. Aurinia Pharmaceuticals Inc (NASDAQ:AUPH) is not the most popular stock in this group but hedge fund interest is still above average. This is a slightly positive signal but we’d rather spend our time researching stocks that hedge funds are piling on. Our calculations showed that top 20 most popular stocks among hedge funds returned 24.4% in 2019 through September 30th and outperformed the S&P 500 ETF (SPY) by 4 percentage points. Unfortunately AUPH wasn’t nearly as popular as these 20 stocks and hedge funds that were betting on AUPH were disappointed as the stock returned -18.8% during the third quarter and underperformed the market. If you are interested in investing in large cap stocks with huge upside potential, you should check out the top 20 most popular stocks among hedge funds as many of these stocks already outperformed the market so far this year.