Hedge Funds and other institutional investors have just completed filing their 13Fs with the Securities and Exchange Commission, revealing their equity portfolios as of the end of December. At Insider Monkey, we follow nearly 750 active hedge funds and notable investors and by analyzing their 13F filings, we can determine the stocks that they are collectively bullish on. One of their picks is American International Group Inc (NYSE:AIG), so let’s take a closer look at the sentiment that surrounds it in the current quarter.

Is American International Group Inc (NYSE:AIG) a cheap investment right now? Money managers are taking a pessimistic view. The number of long hedge fund bets were cut by 2 recently. Our calculations also showed that AIG isn’t among the 30 most popular stocks among hedge funds. AIG was in 39 hedge funds’ portfolios at the end of December. There were 41 hedge funds in our database with AIG holdings at the end of the previous quarter.

In the eyes of most traders, hedge funds are viewed as unimportant, outdated investment tools of the past. While there are more than 8000 funds in operation today, We hone in on the aristocrats of this club, around 750 funds. These money managers preside over most of the hedge fund industry’s total capital, and by paying attention to their top investments, Insider Monkey has unsheathed various investment strategies that have historically defeated the market. Insider Monkey’s flagship hedge fund strategy defeated the S&P 500 index by nearly 5 percentage points annually since its inception in May 2014 through early November 2018. We were able to generate large returns even by identifying short candidates. Our portfolio of short stocks lost 27.5% since February 2017 (through March 12th) even though the market was up nearly 25% during the same period. We just shared a list of 6 short targets in our latest quarterly update and they are already down an average of 6% in less than a month. 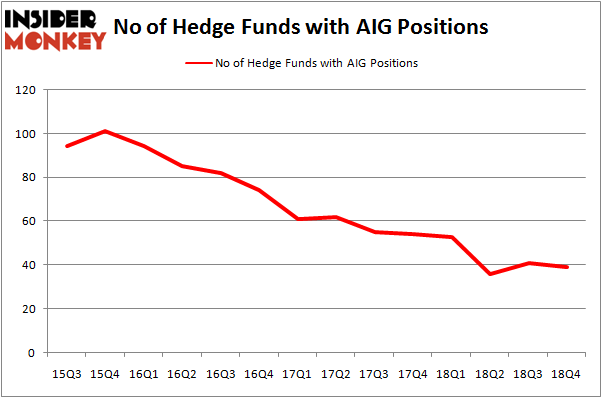 Because American International Group Inc (NYSE:AIG) has faced a decline in interest from the smart money, it’s safe to say that there was a specific group of funds that decided to sell off their entire stakes by the end of the third quarter. It’s worth mentioning that Martin D. Sass’s MD Sass said goodbye to the biggest stake of the 700 funds watched by Insider Monkey, worth an estimated $20.2 million in stock. Glenn Russell Dubin’s fund, Highbridge Capital Management, also said goodbye to its stock, about $12.4 million worth. These moves are intriguing to say the least, as total hedge fund interest was cut by 2 funds by the end of the third quarter.

As you can see these stocks had an average of 42.5 hedge funds with bullish positions and the average amount invested in these stocks was $2360 million. That figure was $1853 million in AIG’s case. Delta Air Lines, Inc. (NYSE:DAL) is the most popular stock in this table. On the other hand AFLAC Incorporated (NYSE:AFL) is the least popular one with only 27 bullish hedge fund positions. American International Group Inc (NYSE:AIG) is not the least popular stock in this group but hedge fund interest is still below average. AIG used to be among the most popular hedge fund stocks a few years ago but hedge fund sentiment has been declining almost consistently since then. This is a negative signal and we’d rather spend our time researching stocks that hedge funds are piling on. Our calculations showed that top 15 most popular stocks among hedge funds returned 19.7% through March 15th and outperformed the S&P 500 ETF (SPY) by 6.6 percentage points. Unfortunately AIG wasn’t in this group. Hedge funds that bet on AIG were disappointed as the stock returned 12.6% and underperformed the market. If you are interested in investing in large cap stocks, you should check out the top 15 hedge fund stocks as 13 of these outperformed the market.

Were Hedge Funds Right About Dumping FedEx Corporation (FDX)?
Monthly Newsletter Strategy
Download a free copy of our newsletter and see the details inside!
Hedge Fund Resource Center
Related News
American International Group Inc (AIG): Are Hedge Funds Right About This Stock? Clearbridge Investments Betting On A Shift From Growth and Momentum 76 Best Insurance Dividend Stocks To Invest In Can Hedge Funds See Into The Future? 10 Biggest Socially Irresponsible Companies In America 11 Best Insurance Companies to Invest in 2017 10 Biggest Recent Accounting Scandals in America Ten of the Most Common Addictions 13 African Countries with the Largest White Population in 2018 6 Causes of Human Trafficking in Africa, India, and US
Billionaire Hedge Funds