Like everyone else, elite investors make mistakes. Some of their top consensus picks, such as Amazon, Facebook and Alibaba, have not done well in Q4 due to various reasons. Nevertheless, the data show elite investors’ consensus picks have done well on average over the long-term. The top 15 S&P 500 stocks among hedge funds at the end of September 2018 returned an average of 1% through March 15th whereas the S&P 500 Index ETF lost 2.2% during the same period. Because their consensus picks have done well, we pay attention to what elite funds think before doing extensive research on a stock. In this article, we take a closer look at American Electric Power Company, Inc. (NYSE:AEP) from the perspective of those elite funds.

Is American Electric Power Company, Inc. (NYSE:AEP) a cheap investment today? The smart money is becoming less hopeful. The number of long hedge fund positions went down by 2 lately. Our calculations also showed that AEP isn’t among the 30 most popular stocks among hedge funds.

Heading into the first quarter of 2019, a total of 34 of the hedge funds tracked by Insider Monkey were bullish on this stock, a change of -6% from one quarter earlier. On the other hand, there were a total of 28 hedge funds with a bullish position in AEP a year ago. With hedge funds’ capital changing hands, there exists an “upper tier” of notable hedge fund managers who were adding to their holdings meaningfully (or already accumulated large positions). 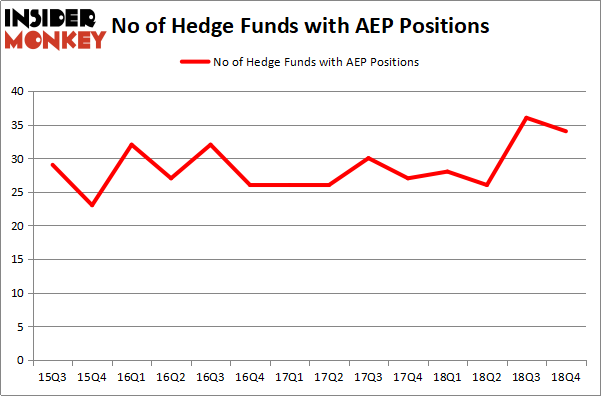 Among these funds, Renaissance Technologies held the most valuable stake in American Electric Power Company, Inc. (NYSE:AEP), which was worth $454.8 million at the end of the third quarter. On the second spot was Citadel Investment Group which amassed $239.3 million worth of shares. Moreover, AQR Capital Management, Millennium Management, and Adage Capital Management were also bullish on American Electric Power Company, Inc. (NYSE:AEP), allocating a large percentage of their portfolios to this stock.

Judging by the fact that American Electric Power Company, Inc. (NYSE:AEP) has experienced a decline in interest from hedge fund managers, it’s safe to say that there is a sect of money managers who sold off their entire stakes in the third quarter. Intriguingly, Jonathan Barrett and Paul Segal’s Luminus Management said goodbye to the largest stake of all the hedgies tracked by Insider Monkey, worth an estimated $54.2 million in stock, and Brian Olson, Baehyun Sung, and Jamie Waters’s Blackstart Capital was right behind this move, as the fund sold off about $20.3 million worth. These bearish behaviors are interesting, as aggregate hedge fund interest fell by 2 funds in the third quarter.

As you can see these stocks had an average of 36.25 hedge funds with bullish positions and the average amount invested in these stocks was $1280 million. That figure was $1059 million in AEP’s case. The Sherwin-Williams Company (NYSE:SHW) is the most popular stock in this table. On the other hand Keurig Dr Pepper Inc. (NYSE:KDP) is the least popular one with only 21 bullish hedge fund positions. American Electric Power Company, Inc. (NYSE:AEP) is not the least popular stock in this group but hedge fund interest is still below average. This is a slightly negative signal and we’d rather spend our time researching stocks that hedge funds are piling on. Our calculations showed that top 15 most popular stocks among hedge funds returned 19.7% through March 15th and outperformed the S&P 500 ETF (SPY) by 6.6 percentage points. Unfortunately AEP wasn’t in this group. Hedge funds that bet on AEP were disappointed as the stock returned 13.1% (flat relative to the market). If you are interested in investing in large cap stocks, you should check out the top 15 hedge fund stocks as 13 of these outperformed the market.

Is Illinois Tool Works Inc. (ITW) A Good Stock To Buy?
Monthly Newsletter Strategy
Download a free copy of our newsletter and see the details inside!
Hedge Fund Resource Center
Related News
American Electric Power Company, Inc. (AEP): Are Hedge Funds Right About This Stock? 50 Best Utility Dividend Stocks To Invest In Billionaire Israel Englander’s Millennium Management Is Betting on These Stocks to Change Its Fortune in 2017 Billionaires Love These Utilities Stocks Hedge Funds Are Crazy About American Electric Power Company Inc (AEP) These Stocks Just Had Their Ratings and Price Targets Slashed by Analysts Crown Castle, Callidus Software: Why These 5 Stocks Are Capturing Investors’ Interest Today Ten of the Most Common Addictions 13 African Countries with the Largest White Population in 2018 6 Causes of Human Trafficking in Africa, India, and US
Billionaire Hedge Funds