The elite funds run by legendary investors such as David Tepper and Dan Loeb make hundreds of millions of dollars for themselves and their investors by spending enormous resources doing research on small cap stocks that big investment banks don’t follow. Because of their pay structures, they have strong incentives to do the research necessary to beat the market. That’s why we pay close attention to what they think in small cap stocks. In this article, we take a closer look at Albireo Pharma, Inc. (NASDAQ:ALBO) from the perspective of those elite funds.

Is Albireo Pharma, Inc. (NASDAQ:ALBO) going to take off soon? Prominent investors are turning less bullish. The number of bullish hedge fund bets shrunk by 1 in recent months. Our calculations also showed that ALBO isn’t among the 30 most popular stocks among hedge funds (see the video below). ALBO was in 12 hedge funds’ portfolios at the end of the second quarter of 2019. There were 13 hedge funds in our database with ALBO holdings at the end of the previous quarter.

If you’d ask most investors, hedge funds are seen as unimportant, old financial tools of years past. While there are over 8000 funds trading today, We choose to focus on the bigwigs of this club, approximately 750 funds. These hedge fund managers have their hands on the majority of all hedge funds’ total asset base, and by following their matchless equity investments, Insider Monkey has revealed various investment strategies that have historically exceeded the broader indices. Insider Monkey’s flagship hedge fund strategy surpassed the S&P 500 index by around 5 percentage points per annum since its inception in May 2014. We were able to generate large returns even by identifying short candidates. Our portfolio of short stocks lost 25.7% since February 2017 (through September 30th) even though the market was up more than 33% during the same period. We just shared a list of 10 short targets in our latest quarterly update .

Unlike other investors who track every movement of the 25 largest hedge funds, our long-short investment strategy relies on hedge fund buy/sell signals given by the 100 best performing hedge funds. Let’s take a gander at the key hedge fund action encompassing Albireo Pharma, Inc. (NASDAQ:ALBO).

What does smart money think about Albireo Pharma, Inc. (NASDAQ:ALBO)? 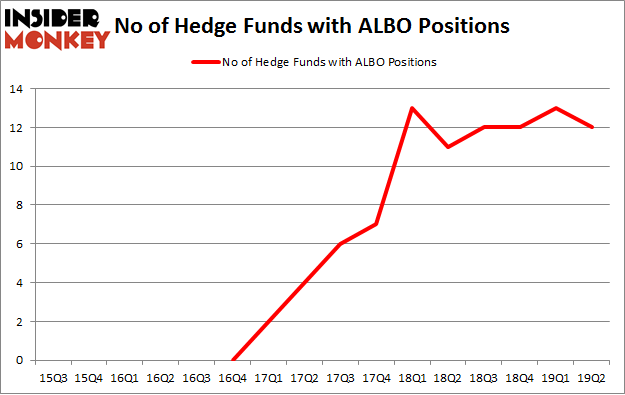 When looking at the institutional investors followed by Insider Monkey, Perceptive Advisors, managed by Joseph Edelman, holds the largest position in Albireo Pharma, Inc. (NASDAQ:ALBO). Perceptive Advisors has a $54.9 million position in the stock, comprising 1.3% of its 13F portfolio. The second most bullish fund manager is Prosight Capital, managed by Lawrence Hawkins, which holds a $8.2 million position; 4.1% of its 13F portfolio is allocated to the stock. Some other hedge funds and institutional investors that are bullish consist of Julian Baker and Felix Baker’s Baker Bros. Advisors, Jerome Pfund and Michael Sjostrom’s Sectoral Asset Management and Noam Gottesman’s GLG Partners.

Since Albireo Pharma, Inc. (NASDAQ:ALBO) has experienced a decline in interest from the smart money, logic holds that there was a specific group of hedgies who were dropping their full holdings in the second quarter. It’s worth mentioning that Philip Hempleman’s Ardsley Partners dumped the largest investment of all the hedgies monitored by Insider Monkey, valued at about $0.2 million in stock. Paul Marshall and Ian Wace’s fund, Marshall Wace LLP, also dumped its stock, about $0.1 million worth. These transactions are important to note, as total hedge fund interest was cut by 1 funds in the second quarter.

As you can see these stocks had an average of 11 hedge funds with bullish positions and the average amount invested in these stocks was $63 million. That figure was $95 million in ALBO’s case. MagnaChip Semiconductor Corporation (NYSE:MX) is the most popular stock in this table. On the other hand P.A.M. Transportation Services, Inc. (NASDAQ:PTSI) is the least popular one with only 1 bullish hedge fund positions. Albireo Pharma, Inc. (NASDAQ:ALBO) is not the most popular stock in this group but hedge fund interest is still above average. This is a slightly positive signal but we’d rather spend our time researching stocks that hedge funds are piling on. Our calculations showed that top 20 most popular stocks among hedge funds returned 24.4% in 2019 through September 30th and outperformed the S&P 500 ETF (SPY) by 4 percentage points. Unfortunately ALBO wasn’t nearly as popular as these 20 stocks and hedge funds that were betting on ALBO were disappointed as the stock returned -38% during the third quarter and underperformed the market. If you are interested in investing in large cap stocks with huge upside potential, you should check out the top 20 most popular stocks among hedge funds as many of these stocks already outperformed the market so far this year.