A whopping number of 13F filings filed with U.S. Securities and Exchange Commission has been processed by Insider Monkey so that individual investors can look at the overall hedge fund sentiment towards the stocks included in their watchlists. These freshly-submitted public filings disclose money managers’ equity positions as of the end of the three-month period that ended June 28, so let’s proceed with the discussion of the hedge fund sentiment on AC Immune SA (NASDAQ:ACIU).

Is AC Immune SA (NASDAQ:ACIU) the right investment to pursue these days? Hedge funds are taking a bearish view. The number of bullish hedge fund bets shrunk by 2 recently. Our calculations also showed that ACIU isn’t among the 30 most popular stocks among hedge funds (see the video below).

Unlike other investors who track every movement of the 25 largest hedge funds, our long-short investment strategy relies on hedge fund buy/sell signals given by the 100 best performing hedge funds. Let’s take a glance at the latest hedge fund action encompassing AC Immune SA (NASDAQ:ACIU).

What have hedge funds been doing with AC Immune SA (NASDAQ:ACIU)?

At the end of the second quarter, a total of 7 of the hedge funds tracked by Insider Monkey were bullish on this stock, a change of -22% from the previous quarter. The graph below displays the number of hedge funds with bullish position in ACIU over the last 16 quarters. With the smart money’s sentiment swirling, there exists a select group of noteworthy hedge fund managers who were upping their stakes significantly (or already accumulated large positions). 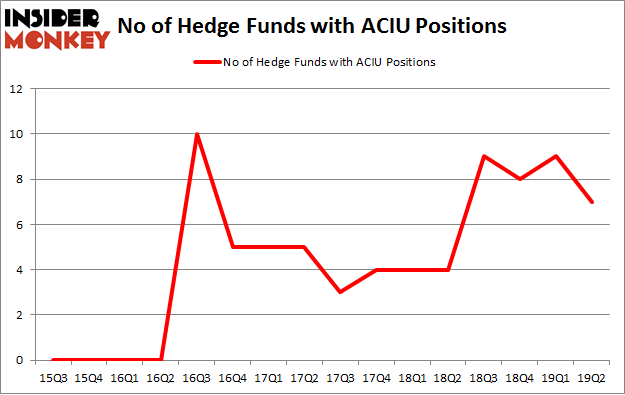 When looking at the institutional investors followed by Insider Monkey, Mark Lampert’s Biotechnology Value Fund / BVF Inc has the largest position in AC Immune SA (NASDAQ:ACIU), worth close to $54.5 million, comprising 6% of its total 13F portfolio. The second most bullish fund manager is Lawrence Hawkins of Prosight Capital, with a $3.1 million position; 1.6% of its 13F portfolio is allocated to the stock. Other members of the smart money that hold long positions consist of Renaissance Technologies, Israel Englander’s Millennium Management and Ken Griffin’s Citadel Investment Group.

Due to the fact that AC Immune SA (NASDAQ:ACIU) has faced falling interest from the aggregate hedge fund industry, it’s easy to see that there were a few funds that elected to cut their positions entirely last quarter. At the top of the heap, Stanley Druckenmiller’s Duquesne Capital sold off the biggest investment of all the hedgies monitored by Insider Monkey, valued at about $6.7 million in stock. Michael S. Weiss and Lindsay A. Rosenwald’s fund, Opus Point Partners Management, also sold off its stock, about $0.2 million worth. These moves are intriguing to say the least, as aggregate hedge fund interest dropped by 2 funds last quarter.

As you can see these stocks had an average of 11.75 hedge funds with bullish positions and the average amount invested in these stocks was $59 million. That figure was $62 million in ACIU’s case. Assembly Biosciences Inc (NASDAQ:ASMB) is the most popular stock in this table. On the other hand Metropolitan Bank Holding Corp. (NYSE:MCB) is the least popular one with only 6 bullish hedge fund positions. AC Immune SA (NASDAQ:ACIU) is not the least popular stock in this group but hedge fund interest is still below average. This is a slightly negative signal and we’d rather spend our time researching stocks that hedge funds are piling on. Our calculations showed that top 20 most popular stocks among hedge funds returned 24.4% in 2019 through September 30th and outperformed the S&P 500 ETF (SPY) by 4 percentage points. Unfortunately ACIU wasn’t nearly as popular as these 20 stocks (hedge fund sentiment was quite bearish); ACIU investors were disappointed as the stock returned -10.8% during the third quarter and underperformed the market. If you are interested in investing in large cap stocks with huge upside potential, you should check out the top 20 most popular stocks among hedge funds as many of these stocks already outperformed the market so far in 2019.