We are still in an overall bull market and many stocks that smart money investors were piling into surged through October 17th. Among them, Facebook and Microsoft ranked among the top 3 picks and these stocks gained 45% and 39% respectively. Hedge funds’ top 3 stock picks returned 34.4% this year and beat the S&P 500 ETFs by 13 percentage points. Investing in index funds guarantees you average returns, not superior returns. We are looking to generate superior returns for our readers. That’s why we believe it isn’t a waste of time to check out hedge fund sentiment before you invest in a stock like Syros Pharmaceuticals, Inc. (NASDAQ:SYRS).

Is Syros Pharmaceuticals, Inc. (NASDAQ:SYRS) a buy, sell, or hold? Hedge funds are getting more optimistic. The number of long hedge fund bets moved up by 5 in recent months. Our calculations also showed that SYRS isn’t among the 30 most popular stocks among hedge funds (see the video below).

In the eyes of most traders, hedge funds are viewed as worthless, outdated investment vehicles of yesteryear. While there are over 8000 funds with their doors open today, We hone in on the elite of this club, approximately 750 funds. These investment experts watch over the majority of the hedge fund industry’s total capital, and by keeping an eye on their highest performing equity investments, Insider Monkey has found numerous investment strategies that have historically defeated Mr. Market. Insider Monkey’s flagship hedge fund strategy surpassed the S&P 500 index by around 5 percentage points annually since its inception in May 2014. We were able to generate large returns even by identifying short candidates. Our portfolio of short stocks lost 25.7% since February 2017 (through September 30th) even though the market was up more than 33% during the same period. We just shared a list of 10 short targets in our latest quarterly update .

Unlike other investors who track every movement of the 25 largest hedge funds, our long-short investment strategy relies on hedge fund buy/sell signals given by the 100 best performing hedge funds. Let’s take a look at the key hedge fund action encompassing Syros Pharmaceuticals, Inc. (NASDAQ:SYRS).

How have hedgies been trading Syros Pharmaceuticals, Inc. (NASDAQ:SYRS)?

At the end of the second quarter, a total of 13 of the hedge funds tracked by Insider Monkey were long this stock, a change of 63% from the first quarter of 2019. By comparison, 10 hedge funds held shares or bullish call options in SYRS a year ago. With hedgies’ sentiment swirling, there exists a select group of noteworthy hedge fund managers who were increasing their stakes substantially (or already accumulated large positions). 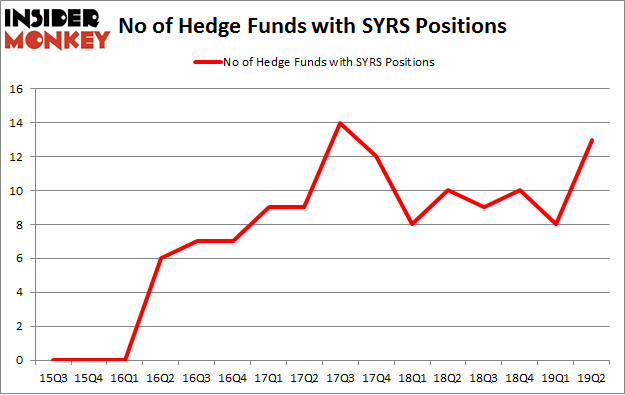 When looking at the institutional investors followed by Insider Monkey, Jeremy Green’s Redmile Group has the largest position in Syros Pharmaceuticals, Inc. (NASDAQ:SYRS), worth close to $33.5 million, accounting for 0.9% of its total 13F portfolio. Coming in second is Samsara BioCapital, led by Srini Akkaraju and Michael Dybbs, holding a $15.2 million position; the fund has 10.1% of its 13F portfolio invested in the stock. Other hedge funds and institutional investors with similar optimism encompass James E. Flynn’s Deerfield Management, Julian Baker and Felix Baker’s Baker Bros. Advisors and Ari Zweiman’s 683 Capital Partners.

As industrywide interest jumped, some big names were leading the bulls’ herd. 683 Capital Partners, managed by Ari Zweiman, initiated the largest position in Syros Pharmaceuticals, Inc. (NASDAQ:SYRS). 683 Capital Partners had $4 million invested in the company at the end of the quarter. Anand Parekh’s Alyeska Investment Group also initiated a $2.9 million position during the quarter. The other funds with new positions in the stock are Oleg Nodelman’s EcoR1 Capital, Anand Parekh’s Alyeska Investment Group, and Peter Muller’s PDT Partners.

As you can see these stocks had an average of 8.75 hedge funds with bullish positions and the average amount invested in these stocks was $44 million. That figure was $83 million in SYRS’s case. COMSCORE, Inc. (NASDAQ:SCOR) is the most popular stock in this table. On the other hand Ciner Resources LP (NYSE:CINR) is the least popular one with only 1 bullish hedge fund positions. Syros Pharmaceuticals, Inc. (NASDAQ:SYRS) is not the most popular stock in this group but hedge fund interest is still above average. Our calculations showed that top 20 most popular stocks among hedge funds returned 24.4% in 2019 through September 30th and outperformed the S&P 500 ETF (SPY) by 4 percentage points. Hedge funds were also right about betting on SYRS as the stock returned 12.1% during the third quarter and outperformed the market. Hedge funds were rewarded for their relative bullishness.