The latest 13F reporting period has come and gone, and Insider Monkey is again at the forefront when it comes to making use of this gold mine of data. We have processed the filings of the more than 700 world-class investment firms that we track and now have access to the collective wisdom contained in these filings, which are based on their June 28 holdings, data that is available nowhere else. Should you consider SunTrust Banks, Inc. (NYSE:STI) for your portfolio? We’ll look to this invaluable collective wisdom for the answer.

SunTrust Banks, Inc. (NYSE:STI) investors should pay attention to an increase in hedge fund interest lately. Our calculations also showed that STI isn’t among the 30 most popular stocks among hedge funds (see the video below). 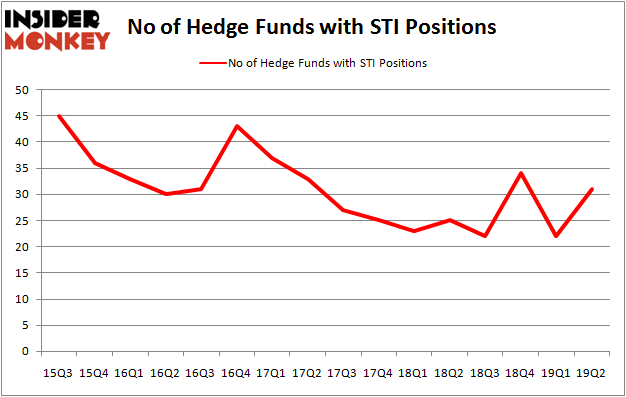 Unlike some fund managers who are betting on Dow reaching 40000 in a year, our long-short investment strategy doesn’t rely on bull markets to deliver double digit returns. We only rely on hedge fund buy/sell signals. We’re going to take a peek at the fresh hedge fund action surrounding SunTrust Banks, Inc. (NYSE:STI).

Heading into the third quarter of 2019, a total of 31 of the hedge funds tracked by Insider Monkey were long this stock, a change of 41% from one quarter earlier. By comparison, 25 hedge funds held shares or bullish call options in STI a year ago. With hedgies’ sentiment swirling, there exists a few key hedge fund managers who were upping their stakes meaningfully (or already accumulated large positions).

More specifically, Arrowstreet Capital was the largest shareholder of SunTrust Banks, Inc. (NYSE:STI), with a stake worth $208 million reported as of the end of March. Trailing Arrowstreet Capital was Alpine Associates, which amassed a stake valued at $114.2 million. Two Sigma Advisors, Sirios Capital Management, and Balyasny Asset Management were also very fond of the stock, giving the stock large weights in their portfolios.

As you can see these stocks had an average of 25.75 hedge funds with bullish positions and the average amount invested in these stocks was $910 million. That figure was $912 million in STI’s case. Fiat Chrysler Automobiles NV (NYSE:FCAU) is the most popular stock in this table. On the other hand TD Ameritrade Holding Corp. (NASDAQ:AMTD) is the least popular one with only 22 bullish hedge fund positions. Compared to these stocks SunTrust Banks, Inc. (NYSE:STI) is more popular among hedge funds. Our calculations showed that top 20 most popular stocks among hedge funds returned 24.4% in 2019 through September 30th and outperformed the S&P 500 ETF (SPY) by 4 percentage points. Hedge funds were also right about betting on STI as the stock returned 10.5% during Q3 and outperformed the market by an even larger margin. Hedge funds were clearly right about piling into this stock relative to other stocks with similar market capitalizations.