Insider Monkey finished processing more than 700 13F filings submitted by hedge funds and prominent investors. These filings show these funds’ portfolio positions as of December 31st, 2018. In this article we are going to take a look at smart money sentiment towards Donaldson Company, Inc. (NYSE:DCI).

Is Donaldson Company, Inc. (NYSE:DCI) ready to rally soon? Money managers are turning bullish. The number of long hedge fund bets moved up by 2 lately. Our calculations also showed that DCI isn’t among the 30 most popular stocks among hedge funds. DCI was in 19 hedge funds’ portfolios at the end of December. There were 17 hedge funds in our database with DCI holdings at the end of the previous quarter.

To the average investor there are many indicators shareholders employ to analyze publicly traded companies. A couple of the less known indicators are hedge fund and insider trading signals. Our researchers have shown that, historically, those who follow the top picks of the best money managers can beat the broader indices by a significant margin (see the details here).

What does the smart money think about Donaldson Company, Inc. (NYSE:DCI)? 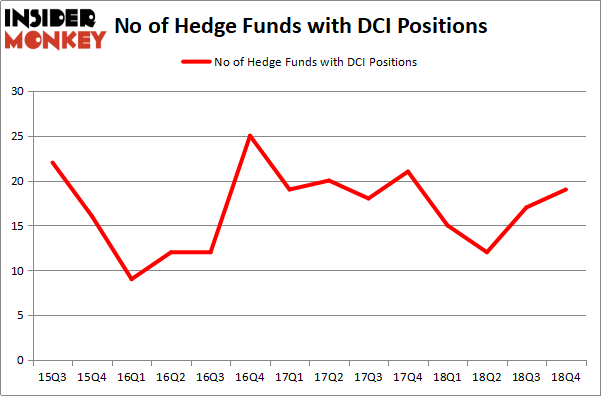 Among these funds, GAMCO Investors held the most valuable stake in Donaldson Company, Inc. (NYSE:DCI), which was worth $39.1 million at the end of the third quarter. On the second spot was Impax Asset Management which amassed $31.2 million worth of shares. Moreover, Arrowstreet Capital, Citadel Investment Group, and D E Shaw were also bullish on Donaldson Company, Inc. (NYSE:DCI), allocating a large percentage of their portfolios to this stock.

As aggregate interest increased, key hedge funds were leading the bulls’ herd. Marshall Wace LLP, managed by Paul Marshall and Ian Wace, created the most valuable position in Donaldson Company, Inc. (NYSE:DCI). Marshall Wace LLP had $3.3 million invested in the company at the end of the quarter. Jim Simons’s Renaissance Technologies also made a $1.5 million investment in the stock during the quarter. The other funds with brand new DCI positions are Cliff Asness’s AQR Capital Management, Minhua Zhang’s Weld Capital Management, and Ray Dalio’s Bridgewater Associates.

As you can see these stocks had an average of 28 hedge funds with bullish positions and the average amount invested in these stocks was $447 million. That figure was $124 million in DCI’s case. EnCana Corporation (NYSE:ECA) is the most popular stock in this table. On the other hand Companhia Brasileira de Distrib. (NYSE:CBD) is the least popular one with only 13 bullish hedge fund positions. Donaldson Company, Inc. (NYSE:DCI) is not the least popular stock in this group but hedge fund interest is still below average though hedge fund sentiment is improving in recent months. Our calculations showed that top 15 most popular stocks among hedge funds returned 21.3% through April 8th and outperformed the S&P 500 ETF (SPY) by more than 5 percentage points. Hedge funds were also right about betting on DCI as the stock returned 22.2% and outperformed the market as well.