In these volatile markets we scrutinize hedge fund filings to get a reading on which direction each stock might be going. Although the masses and most of the financial media blame hedge funds for their exorbitant fee structure and disappointing performance, these investors have proved to have great stock picking abilities over the years (that’s why their assets under management continue to swell). We believe hedge fund sentiment should serve as a crucial tool of an individual investor’s stock selection process, as it may offer great insights of how the brightest minds of the finance industry feel about specific stocks. After all, these people have access to smartest analysts and expensive data/information sources that individual investors can’t match. So should one consider investing in Seritage Growth Properties (NYSE:SRG)? The smart money sentiment can provide an answer to this question.

Is Seritage Growth Properties (NYSE:SRG) ready to rally soon? Money managers are becoming more confident. The number of bullish hedge fund bets rose by 1 lately. Our calculations also showed that SRG isn’t among the 30 most popular stocks among hedge funds (click for Q4 rankings and see the video at the end of this article for Q3 rankings).

To most stock holders, hedge funds are assumed to be slow, outdated investment vehicles of yesteryear. While there are greater than 8000 funds with their doors open at present, Our experts look at the moguls of this club, approximately 850 funds. These money managers preside over most of all hedge funds’ total asset base, and by keeping track of their top stock picks, Insider Monkey has brought to light several investment strategies that have historically outperformed the market. Insider Monkey’s flagship short hedge fund strategy outrun the S&P 500 short ETFs by around 20 percentage points a year since its inception in March 2017. Our portfolio of short stocks lost 35.3% since February 2017 (through March 3rd) even though the market was up more than 35% during the same period. We just shared a list of 7 short targets in our latest quarterly update . 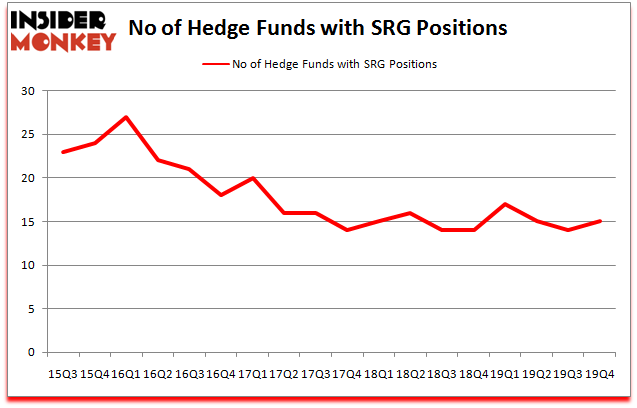 When looking at the institutional investors followed by Insider Monkey, BloombergSen, managed by Jonathan Bloomberg, holds the number one position in Seritage Growth Properties (NYSE:SRG). BloombergSen has a $116.6 million position in the stock, comprising 6% of its 13F portfolio. The second most bullish fund manager is Empyrean Capital Partners, managed by Michael A. Price and Amos Meron, which holds a $100.2 million position; the fund has 6.6% of its 13F portfolio invested in the stock. Other members of the smart money that hold long positions consist of Jeffrey Gates’s Gates Capital Management, Edmond M. Safra’s EMS Capital and Scott Wallace’s Wallace Capital Management. In terms of the portfolio weights assigned to each position Aquamarine Capital Management allocated the biggest weight to Seritage Growth Properties (NYSE:SRG), around 7.38% of its 13F portfolio. Empyrean Capital Partners is also relatively very bullish on the stock, earmarking 6.59 percent of its 13F equity portfolio to SRG.

As one would reasonably expect, some big names were leading the bulls’ herd. Tudor Investment Corp, managed by Paul Tudor Jones, established the most outsized position in Seritage Growth Properties (NYSE:SRG). Tudor Investment Corp had $0.3 million invested in the company at the end of the quarter. John A. Levin’s Levin Capital Strategies also made a $0.2 million investment in the stock during the quarter.

As you can see these stocks had an average of 29.5 hedge funds with bullish positions and the average amount invested in these stocks was $260 million. That figure was $353 million in SRG’s case. Arena Pharmaceuticals, Inc. (NASDAQ:ARNA) is the most popular stock in this table. On the other hand Nu Skin Enterprises, Inc. (NYSE:NUS) is the least popular one with only 22 bullish hedge fund positions. Compared to these stocks Seritage Growth Properties (NYSE:SRG) is even less popular than NUS. Hedge funds dodged a bullet by taking a bearish stance towards SRG. Our calculations showed that the top 20 most popular hedge fund stocks returned 41.3% in 2019 and outperformed the S&P 500 ETF (SPY) by 10.1 percentage points. These stocks lost 13.0% in 2020 through April 6th but managed to beat the market by 4.2 percentage points. Unfortunately SRG wasn’t nearly as popular as these 20 stocks (hedge fund sentiment was very bearish); SRG investors were disappointed as the stock returned -81% during the same time period and underperformed the market. If you are interested in investing in large cap stocks with huge upside potential, you should check out the top 20 most popular stocks among hedge funds as most of these stocks already outperformed the market so far in 2020.