Is Unilever plc (NYSE:UL) a good stock to buy right now? We at Insider Monkey like to examine what billionaires and hedge funds think of a company before doing days of research on it. Given their 2 and 20 payment structure, hedge funds have more incentives and resources than the average investor. The funds have access to expert networks and get tips from industry insiders. They also have numerous Ivy League graduates and MBAs. Like everyone else, hedge funds perform miserably at times, but their consensus picks have historically outperformed the market after risk adjustments.

Unilever plc (NYSE:UL) was in 13 hedge funds’ portfolios at the end of December. UL has seen a decrease in enthusiasm from smart money recently. There were 14 hedge funds in our database with UL positions at the end of the previous quarter. Our calculations also showed that UL isn’t among the 30 most popular stocks among hedge funds.

According to most market participants, hedge funds are perceived as worthless, old investment vehicles of yesteryear. While there are over 8000 funds in operation at present, Our researchers hone in on the aristocrats of this club, about 750 funds. These money managers watch over bulk of all hedge funds’ total capital, and by shadowing their first-class equity investments, Insider Monkey has deciphered many investment strategies that have historically surpassed the market. Insider Monkey’s flagship hedge fund strategy outstripped the S&P 500 index by nearly 5 percentage points per year since its inception in May 2014 through early November 2018. We were able to generate large returns even by identifying short candidates. Our portfolio of short stocks lost 27.5% since February 2017 (through March 12th) even though the market was up nearly 25% during the same period. We just shared a list of 6 short targets in our latest quarterly update and they are already down an average of 6% in less than a month. 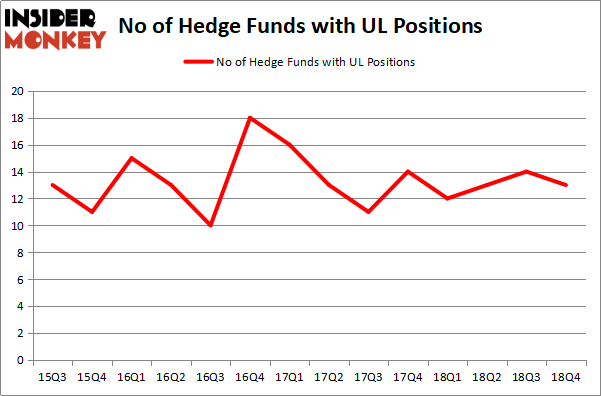 More specifically, Arrowstreet Capital was the largest shareholder of Unilever plc (NYSE:UL), with a stake worth $88.2 million reported as of the end of September. Trailing Arrowstreet Capital was Markel Gayner Asset Management, which amassed a stake valued at $79.8 million. Renaissance Technologies, Citadel Investment Group, and D E Shaw were also very fond of the stock, giving the stock large weights in their portfolios.

Judging by the fact that Unilever plc (NYSE:UL) has experienced declining sentiment from the aggregate hedge fund industry, logic holds that there is a sect of hedgies that decided to sell off their positions entirely last quarter. Interestingly, J. Alan Reid, Jr.’s Forward Management sold off the largest position of the 700 funds tracked by Insider Monkey, valued at an estimated $2.1 million in stock, and Michael Platt and William Reeves’s BlueCrest Capital Mgmt. was right behind this move, as the fund said goodbye to about $1.2 million worth. These transactions are important to note, as aggregate hedge fund interest dropped by 1 funds last quarter.

Let’s check out hedge fund activity in other stocks – not necessarily in the same industry as Unilever plc (NYSE:UL) but similarly valued. These stocks are AbbVie Inc (NYSE:ABBV), McDonald’s Corporation (NYSE:MCD), TOTAL S.A. (NYSE:TOT), and Anheuser-Busch InBev SA/NV (NYSE:BUD). All of these stocks’ market caps are closest to UL’s market cap.

As you can see these stocks had an average of 31 hedge funds with bullish positions and the average amount invested in these stocks was $1549 million. That figure was $212 million in UL’s case. McDonald’s Corporation (NYSE:MCD) is the most popular stock in this table. On the other hand TOTAL S.A. (NYSE:TOT) is the least popular one with only 9 bullish hedge fund positions. Unilever plc (NYSE:UL) is not the least popular stock in this group but hedge fund interest is still below average. Our calculations showed that top 15 most popular stocks among hedge funds returned 19.7% through March 15th and outperformed the S&P 500 ETF (SPY) by 6.6 percentage points. Unfortunately Unilever wasn’t in this group. The small number of hedge funds that bet on UL were disappointed as the stock returned 9.6% and underperformed the market. If you are interested in investing in large cap stocks, you should check out the top 15 hedge fund stocks as 13 of these outperformed the market.