Like everyone else, elite investors make mistakes. Some of their top consensus picks, such as Amazon, Facebook and Alibaba, have not done well in Q4 due to various reasons. Nevertheless, the data show elite investors’ consensus picks have done well on average over the long-term. The top 20 stocks among hedge funds beat the S&P 500 Index ETF by 4 percentage points so far this year. Because their consensus picks have done well, we pay attention to what elite funds think before doing extensive research on a stock. In this article, we take a closer look at BioDelivery Sciences International, Inc. (NASDAQ:BDSI) from the perspective of those elite funds.

BioDelivery Sciences International, Inc. (NASDAQ:BDSI) has experienced a decrease in hedge fund sentiment recently. BDSI was in 16 hedge funds’ portfolios at the end of June. There were 18 hedge funds in our database with BDSI positions at the end of the previous quarter. Our calculations also showed that BDSI isn’t among the 30 most popular stocks among hedge funds (see the video below). 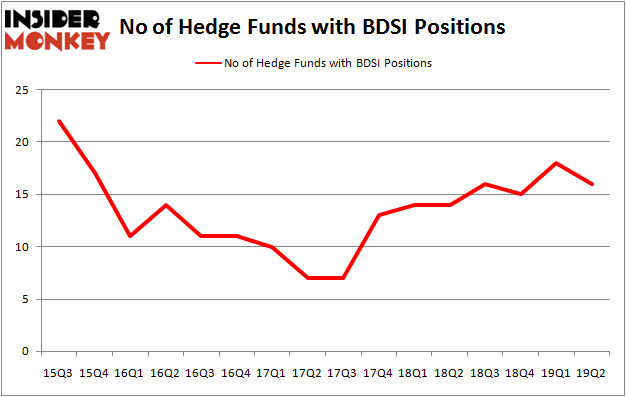 How have hedgies been trading BioDelivery Sciences International, Inc. (NASDAQ:BDSI)?

Heading into the third quarter of 2019, a total of 16 of the hedge funds tracked by Insider Monkey held long positions in this stock, a change of -11% from the first quarter of 2019. The graph below displays the number of hedge funds with bullish position in BDSI over the last 16 quarters. With hedgies’ positions undergoing their usual ebb and flow, there exists an “upper tier” of key hedge fund managers who were upping their stakes meaningfully (or already accumulated large positions).

The largest stake in BioDelivery Sciences International, Inc. (NASDAQ:BDSI) was held by venBio Select Advisor, which reported holding $34.5 million worth of stock at the end of March. It was followed by Nantahala Capital Management with a $21.3 million position. Other investors bullish on the company included Broadfin Capital, Rubric Capital Management, and Adage Capital Management.

Since BioDelivery Sciences International, Inc. (NASDAQ:BDSI) has faced a decline in interest from the smart money, we can see that there were a few hedge funds that decided to sell off their positions entirely by the end of the second quarter. It’s worth mentioning that Benjamin A. Smith’s Laurion Capital Management dropped the biggest investment of the “upper crust” of funds watched by Insider Monkey, worth an estimated $3 million in stock, and Michael Gelband’s ExodusPoint Capital was right behind this move, as the fund said goodbye to about $0.9 million worth. These transactions are intriguing to say the least, as total hedge fund interest was cut by 2 funds by the end of the second quarter.

As you can see these stocks had an average of 4.75 hedge funds with bullish positions and the average amount invested in these stocks was $23 million. That figure was $119 million in BDSI’s case. Digital Turbine Inc (NASDAQ:APPS) is the most popular stock in this table. On the other hand CNB Financial Corporation (NASDAQ:CCNE) is the least popular one with only 2 bullish hedge fund positions. Compared to these stocks BioDelivery Sciences International, Inc. (NASDAQ:BDSI) is more popular among hedge funds. Our calculations showed that top 20 most popular stocks among hedge funds returned 24.4% in 2019 through September 30th and outperformed the S&P 500 ETF (SPY) by 4 percentage points. Unfortunately BDSI wasn’t nearly as popular as these 20 stocks and hedge funds that were betting on BDSI were disappointed as the stock returned -9.5% during the third quarter and underperformed the market. If you are interested in investing in large cap stocks with huge upside potential, you should check out the top 20 most popular stocks among hedge funds as many of these stocks already outperformed the market in Q3.