In these volatile markets we scrutinize hedge fund filings to get a reading on which direction each stock might be going. Our extensive research has shown that imitating the smart money can generate significant returns for retail investors, which is why we track nearly 835 active prominent money managers and analyze their quarterly 13F filings. The stocks that are heavily bought by hedge funds historically outperformed the market, though there is no shortage of high profile failures like hedge funds’ 2018 losses in Facebook and Apple. Let’s take a closer look at what the funds we track think about Qiagen NV (NYSE:QGEN) in this article.

Is Qiagen NV (NYSE:QGEN) going to take off soon? The best stock pickers are becoming more confident. The number of long hedge fund bets advanced by 27 in recent months. Our calculations also showed that QGEN isn’t among the 30 most popular stocks among hedge funds (click for Q4 rankings and see the video at the end of this article for Q3 rankings). QGEN was in 51 hedge funds’ portfolios at the end of December. There were 24 hedge funds in our database with QGEN positions at the end of the previous quarter. 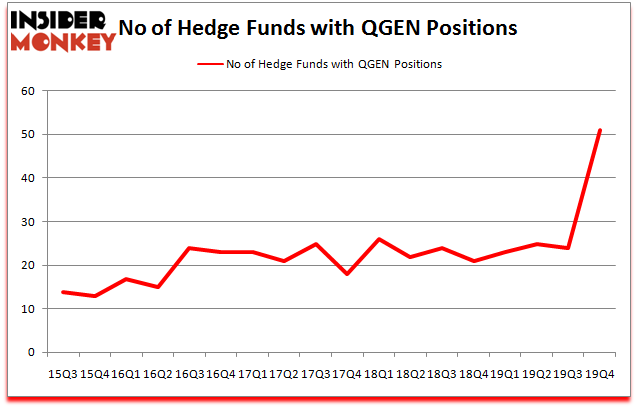 According to Insider Monkey’s hedge fund database, Citadel Investment Group, managed by Ken Griffin, holds the biggest position in Qiagen NV (NYSE:QGEN). Citadel Investment Group has a $75.7 million position in the stock, comprising less than 0.1%% of its 13F portfolio. Sitting at the No. 2 spot is Farallon Capital, with a $72.8 million position; the fund has 0.6% of its 13F portfolio invested in the stock. Remaining professional money managers that are bullish include Phill Gross and Robert Atchinson’s Adage Capital Management, D. E. Shaw’s D E Shaw and Clint Carlson’s Carlson Capital. In terms of the portfolio weights assigned to each position Twin Capital Management allocated the biggest weight to Qiagen NV (NYSE:QGEN), around 13.2% of its 13F portfolio. Sand Grove Capital Partners is also relatively very bullish on the stock, designating 5.49 percent of its 13F equity portfolio to QGEN.

As you can see these stocks had an average of 32.75 hedge funds with bullish positions and the average amount invested in these stocks was $1017 million. That figure was $585 million in QGEN’s case. Spirit AeroSystems Holdings, Inc. (NYSE:SPR) is the most popular stock in this table. On the other hand Levi Strauss & Co. (NYSE:LEVI) is the least popular one with only 11 bullish hedge fund positions. Compared to these stocks Qiagen NV (NYSE:QGEN) is more popular among hedge funds. Our calculations showed that top 10 most popular stocks among hedge funds returned 41.4% in 2019 and outperformed the S&P 500 ETF (SPY) by 10.1 percentage points. These stocks returned 1.3% in 2020 through May 1st but still managed to beat the market by 12.9 percentage points. Hedge funds were also right about betting on QGEN as the stock returned 23.3% so far in 2020 (through May 1st) and outperformed the market by an even larger margin. Hedge funds were clearly right about piling into this stock relative to other stocks with similar market capitalizations.