Were Hedge Funds Right About Pulling The Plug On Barnes Group Inc. (B)?

Insider Monkey has processed numerous 13F filings of hedge funds and successful value investors to create an extensive database of hedge fund holdings. The 13F filings show the hedge funds’ and successful investors’ positions as of the end of the second quarter. You can find write-ups about an individual hedge fund’s trades on numerous financial news websites. However, in this article we will take a look at their collective moves and analyze what the smart money thinks of Barnes Group Inc. (NYSE:B) based on that data.

Barnes Group Inc. (NYSE:B) investors should pay attention to a decrease in hedge fund interest lately. B was in 15 hedge funds’ portfolios at the end of June. There were 18 hedge funds in our database with B positions at the end of the previous quarter. Our calculations also showed that B isn’t among the 30 most popular stocks among hedge funds (see the video below).

What does smart money think about Barnes Group Inc. (NYSE:B)? 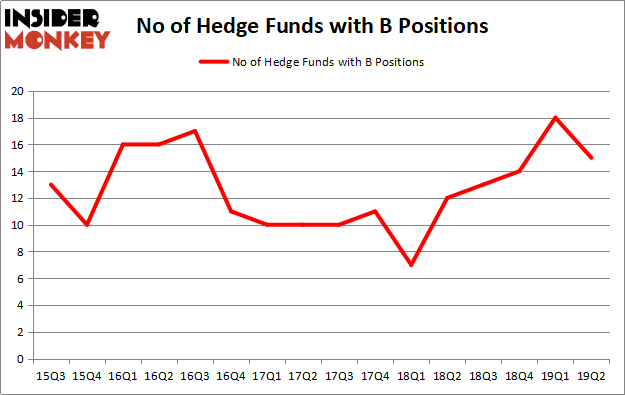 Among these funds, Millennium Management held the most valuable stake in Barnes Group Inc. (NYSE:B), which was worth $13.1 million at the end of the second quarter. On the second spot was D E Shaw which amassed $12.9 million worth of shares. Moreover, Renaissance Technologies, GLG Partners, and Fisher Asset Management were also bullish on Barnes Group Inc. (NYSE:B), allocating a large percentage of their portfolios to this stock.

Because Barnes Group Inc. (NYSE:B) has faced falling interest from the aggregate hedge fund industry, logic holds that there was a specific group of hedge funds who were dropping their positions entirely last quarter. Interestingly, Benjamin A. Smith’s Laurion Capital Management cut the largest investment of the “upper crust” of funds tracked by Insider Monkey, comprising close to $0.9 million in stock. Paul Tudor Jones’s fund, Tudor Investment Corp, also sold off its stock, about $0.7 million worth. These bearish behaviors are important to note, as aggregate hedge fund interest dropped by 3 funds last quarter.

As you can see these stocks had an average of 18.75 hedge funds with bullish positions and the average amount invested in these stocks was $187 million. That figure was $57 million in B’s case. Advanced Disposal Services, Inc. (NYSE:ADSW) is the most popular stock in this table. On the other hand Cathay General Bancorp (NASDAQ:CATY) is the least popular one with only 12 bullish hedge fund positions. Barnes Group Inc. (NYSE:B) is not the least popular stock in this group but hedge fund interest is still below average. This is a slightly negative signal and we’d rather spend our time researching stocks that hedge funds are piling on. Our calculations showed that top 20 most popular stocks among hedge funds returned 24.4% in 2019 through September 30th and outperformed the S&P 500 ETF (SPY) by 4 percentage points. Unfortunately B wasn’t nearly as popular as these 20 stocks (hedge fund sentiment was quite bearish); B investors were disappointed as the stock returned -8.2% during the third quarter and underperformed the market. If you are interested in investing in large cap stocks with huge upside potential, you should check out the top 20 most popular stocks among hedge funds as many of these stocks already outperformed the market so far in 2019.