In these volatile markets we scrutinize hedge fund filings to get a reading on which direction each stock might be going. Insider Monkey has processed numerous 13F filings of hedge funds and successful value investors to create an extensive database of hedge fund holdings. The 13F filings show the hedge funds’ and successful investors’ positions as of the end of the fourth quarter. You can find articles about an individual hedge fund’s trades on numerous financial news websites. However, in this article we will take a look at their collective moves over the last 4 years and analyze what the smart money thinks of Progress Software Corporation (NASDAQ:PRGS) based on that data.

Progress Software Corporation (NASDAQ:PRGS) was in 20 hedge funds’ portfolios at the end of December. PRGS has experienced a decrease in enthusiasm from smart money in recent months. There were 22 hedge funds in our database with PRGS positions at the end of the previous quarter. Our calculations also showed that PRGS isn’t among the 30 most popular stocks among hedge funds (click for Q4 rankings and see the video at the end of this article for Q3 rankings).

What does smart money think about Progress Software Corporation (NASDAQ:PRGS)?

At Q4’s end, a total of 20 of the hedge funds tracked by Insider Monkey held long positions in this stock, a change of -9% from the third quarter of 2019. By comparison, 22 hedge funds held shares or bullish call options in PRGS a year ago. With the smart money’s capital changing hands, there exists a few noteworthy hedge fund managers who were adding to their stakes significantly (or already accumulated large positions). 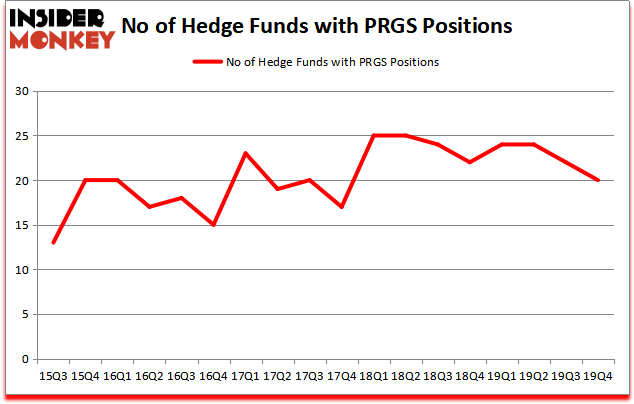 Among these funds, Renaissance Technologies held the most valuable stake in Progress Software Corporation (NASDAQ:PRGS), which was worth $76.1 million at the end of the third quarter. On the second spot was GLG Partners which amassed $48.3 million worth of shares. Fisher Asset Management, D E Shaw, and AQR Capital Management were also very fond of the stock, becoming one of the largest hedge fund holders of the company. In terms of the portfolio weights assigned to each position GLG Partners allocated the biggest weight to Progress Software Corporation (NASDAQ:PRGS), around 0.16% of its 13F portfolio. PDT Partners is also relatively very bullish on the stock, setting aside 0.1 percent of its 13F equity portfolio to PRGS.

Since Progress Software Corporation (NASDAQ:PRGS) has faced declining sentiment from the aggregate hedge fund industry, we can see that there was a specific group of fund managers who sold off their entire stakes heading into Q4. It’s worth mentioning that Paul Marshall and Ian Wace’s Marshall Wace LLP dumped the largest investment of the “upper crust” of funds monitored by Insider Monkey, valued at an estimated $2.3 million in stock, and David Harding’s Winton Capital Management was right behind this move, as the fund dumped about $0.5 million worth. These bearish behaviors are important to note, as aggregate hedge fund interest dropped by 2 funds heading into Q4.

Let’s check out hedge fund activity in other stocks – not necessarily in the same industry as Progress Software Corporation (NASDAQ:PRGS) but similarly valued. These stocks are McGrath RentCorp (NASDAQ:MGRC), O-I Glass, Inc. (NYSE:OI), Axos Financial, Inc. (NYSE:AX), and Jack in the Box Inc. (NASDAQ:JACK). This group of stocks’ market values are similar to PRGS’s market value.

As you can see these stocks had an average of 20.25 hedge funds with bullish positions and the average amount invested in these stocks was $254 million. That figure was $223 million in PRGS’s case. Jack in the Box Inc. (NASDAQ:JACK) is the most popular stock in this table. On the other hand Axos Financial, Inc. (NYSE:AX) is the least popular one with only 15 bullish hedge fund positions. Progress Software Corporation (NASDAQ:PRGS) is not the least popular stock in this group but hedge fund interest is still below average. Our calculations showed that top 20 most popular stocks among hedge funds returned 41.3% in 2019 and outperformed the S&P 500 ETF (SPY) by 10.1 percentage points. These stocks lost 13.0% in 2020 through April 6th but beat the market by 4.2 percentage points. A small number of hedge funds were also right about betting on PRGS, though not to the same extent, as the stock returned -16.4% during the same time period and outperformed the market.