Hedge fund managers like David Einhorn, Bill Ackman, or Carl Icahn became billionaires through reaping large profits for their investors, which is why piggybacking their stock picks may provide us with significant returns as well. Many hedge funds, like Paul Singer’s Elliott Management, are pretty secretive, but we can still get some insights by analyzing their quarterly 13F filings. One of the most fertile grounds for large abnormal returns is hedge funds’ most popular small-cap picks, which are not so widely followed and often trade at a discount to their intrinsic value. In this article we will check out hedge fund activity in another small-cap stock: Verizon Communications Inc. (NYSE:VZ).

Verizon Communications Inc. (NYSE:VZ) was in 54 hedge funds’ portfolios at the end of the second quarter of 2019. VZ investors should be aware of an increase in hedge fund interest lately. There were 52 hedge funds in our database with VZ holdings at the end of the previous quarter. Our calculations also showed that VZ ranked 81st and isn’t among the 30 most popular stocks among hedge funds.

In the eyes of most shareholders, hedge funds are seen as underperforming, old investment vehicles of years past. While there are over 8000 funds with their doors open today, We choose to focus on the aristocrats of this group, about 750 funds. It is estimated that this group of investors preside over bulk of the hedge fund industry’s total capital, and by tailing their highest performing stock picks, Insider Monkey has unsheathed various investment strategies that have historically surpassed the broader indices. Insider Monkey’s flagship hedge fund strategy exceeded the S&P 500 index by around 5 percentage points annually since its inception in May 2014. We were able to generate large returns even by identifying short candidates. Our portfolio of short stocks lost 25.7% since February 2017 (through September 30th) even though the market was up more than 33% during the same period. We just shared a list of 10 short targets in our latest quarterly update .

Unlike some fund managers who are betting on Dow reaching 40000 in a year, our long-short investment strategy doesn’t rely on bull markets to deliver double digit returns. We only rely on hedge fund buy/sell signals. We’re going to check out the fresh hedge fund action encompassing Verizon Communications Inc. (NYSE:VZ).

How have hedgies been trading Verizon Communications Inc. (NYSE:VZ)?

At Q2’s end, a total of 54 of the hedge funds tracked by Insider Monkey were bullish on this stock, a change of 4% from the first quarter of 2019. Below, you can check out the change in hedge fund sentiment towards VZ over the last 16 quarters. With the smart money’s positions undergoing their usual ebb and flow, there exists a select group of noteworthy hedge fund managers who were increasing their holdings substantially (or already accumulated large positions). 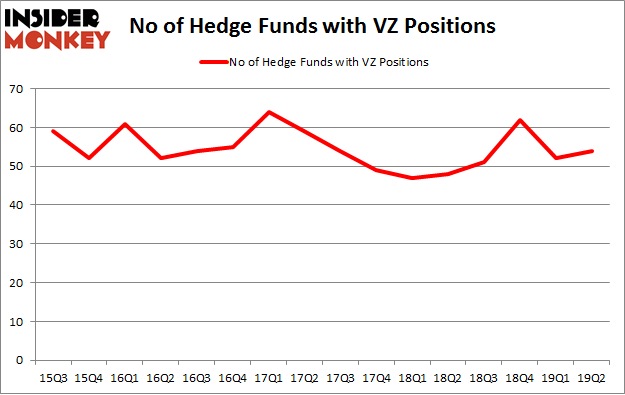 The largest stake in Verizon Communications Inc. (NYSE:VZ) was held by AQR Capital Management, which reported holding $591.3 million worth of stock at the end of March. It was followed by Adage Capital Management with a $261.1 million position. Other investors bullish on the company included Citadel Investment Group, Renaissance Technologies, and D E Shaw.

As aggregate interest increased, key money managers have jumped into Verizon Communications Inc. (NYSE:VZ) headfirst. Renaissance Technologies, managed by Jim Simons, created the most valuable position in Verizon Communications Inc. (NYSE:VZ). Renaissance Technologies had $131.6 million invested in the company at the end of the quarter. Steve Cohen’s Point72 Asset Management also made a $53.1 million investment in the stock during the quarter. The other funds with new positions in the stock are Hari Hariharan’s NWI Management, Matthew Tewksbury’s Stevens Capital Management, and Ray Dalio’s Bridgewater Associates.

As you can see these stocks had an average of 55 hedge funds with bullish positions and the average amount invested in these stocks was $3979 million. That figure was $1589 million in VZ’s case. UnitedHealth Group Incorporated (NYSE:UNH) is the most popular stock in this table. On the other hand Chevron Corporation (NYSE:CVX) is the least popular one with only 44 bullish hedge fund positions. Verizon Communications Inc. (NYSE:VZ) is not the least popular stock in this group but hedge fund interest is still below average. Our calculations showed that top 20 most popular stocks among hedge funds returned 24.4% in 2019 through September 30th and outperformed the S&P 500 ETF (SPY) by 4 percentage points. Hedge funds were also right about betting on VZ as the stock returned 6.8% during the same time frame and outperformed the market by an even larger margin.