Were Hedge Funds Right About Piling Into V.F. Corporation (VFC)?

Is V.F. Corporation (NYSE:VFC) a good investment right now? We check hedge fund and billionaire investor sentiment before delving into hours of research. Hedge funds spend millions of dollars on Ivy League graduates, expert networks, and get tips from investment bankers and industry insiders. Sure they sometimes fail miserably, but their consensus stock picks historically outperformed the market after adjusting for known risk factors.

V.F. Corporation (NYSE:VFC) was in 32 hedge funds’ portfolios at the end of the second quarter of 2019. VFC shareholders have witnessed an increase in enthusiasm from smart money lately. There were 29 hedge funds in our database with VFC holdings at the end of the previous quarter. Our calculations also showed that VFC isn’t among the 30 most popular stocks among hedge funds.

To most shareholders, hedge funds are viewed as slow, old investment vehicles of years past. While there are more than 8000 funds in operation at present, Our researchers look at the upper echelon of this club, about 750 funds. These hedge fund managers watch over most of all hedge funds’ total asset base, and by shadowing their inimitable picks, Insider Monkey has identified various investment strategies that have historically outrun Mr. Market. Insider Monkey’s flagship hedge fund strategy outpaced the S&P 500 index by around 5 percentage points annually since its inception in May 2014. We were able to generate large returns even by identifying short candidates. Our portfolio of short stocks lost 25.7% since February 2017 (through September 30th) even though the market was up more than 33% during the same period. We just shared a list of 10 short targets in our latest quarterly update .

Unlike some fund managers who are betting on Dow reaching 40000 in a year, our long-short investment strategy doesn’t rely on bull markets to deliver double digit returns. We only rely on hedge fund buy/sell signals. We’re going to take a peek at the latest hedge fund action encompassing V.F. Corporation (NYSE:VFC).

What does smart money think about V.F. Corporation (NYSE:VFC)? 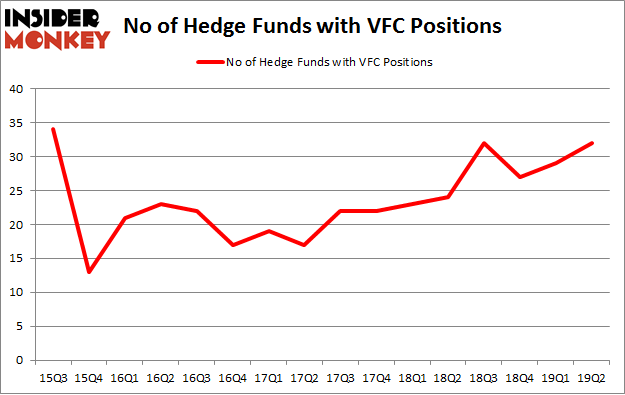 Among these funds, Arrowstreet Capital held the most valuable stake in V.F. Corporation (NYSE:VFC), which was worth $299.5 million at the end of the second quarter. On the second spot was Two Sigma Advisors which amassed $150.9 million worth of shares. Moreover, Citadel Investment Group, Samlyn Capital, and Diamond Hill Capital were also bullish on V.F. Corporation (NYSE:VFC), allocating a large percentage of their portfolios to this stock.

With a general bullishness amongst the heavyweights, key hedge funds have jumped into V.F. Corporation (NYSE:VFC) headfirst. Moore Global Investments, managed by Louis Bacon, initiated the biggest position in V.F. Corporation (NYSE:VFC). Moore Global Investments had $26.2 million invested in the company at the end of the quarter. Paul Marshall and Ian Wace’s Marshall Wace LLP also made a $17 million investment in the stock during the quarter. The following funds were also among the new VFC investors: Lee Ainslie’s Maverick Capital, Dmitry Balyasny’s Balyasny Asset Management, and Perella Weinberg Partners.

As you can see these stocks had an average of 24.75 hedge funds with bullish positions and the average amount invested in these stocks was $1548 million. That figure was $985 million in VFC’s case. The Allstate Corporation (NYSE:ALL) is the most popular stock in this table. On the other hand The Royal Bank of Scotland Group plc (NYSE:RBS) is the least popular one with only 6 bullish hedge fund positions. V.F. Corporation (NYSE:VFC) is not the most popular stock in this group but hedge fund interest is still above average. Our calculations showed that top 20 most popular stocks (see the video below) among hedge funds returned 24.4% in 2019 through September 30th and outperformed the S&P 500 ETF (SPY) by 4 percentage points. Hedge funds were also right about betting on VFC, though not to the same extent, as the stock returned 2.4% during the third quarter and outperformed the market as well.