Were Hedge Funds Right About Piling Into The Timken Company (TKR)?

The government requires hedge funds and wealthy investors that crossed the $100 million equity holdings threshold are required to file a report that shows their positions at the end of every quarter. Even though it isn’t the intention, these filings level the playing field for ordinary investors. The latest round of 13F filings disclosed the funds’ positions on March 31. We at Insider Monkey have made an extensive database of nearly 750 of those elite funds and famous investors’ filings. In this article, we analyze how these elite funds and prominent investors traded The Timken Company (NYSE:TKR) based on those filings.

The Timken Company (NYSE:TKR) has seen an increase in support from the world’s most elite money managers lately. Our calculations also showed that TKR isn’t among the 30 most popular stocks among hedge funds.

In the eyes of most traders, hedge funds are perceived as underperforming, outdated financial vehicles of the past. While there are greater than 8000 funds trading at present, We look at the leaders of this group, around 750 funds. These hedge fund managers orchestrate the lion’s share of the hedge fund industry’s total asset base, and by paying attention to their unrivaled investments, Insider Monkey has unearthed a number of investment strategies that have historically surpassed the S&P 500 index. Insider Monkey’s flagship hedge fund strategy beat the S&P 500 index by around 5 percentage points annually since its inception in May 2014 through June 18th. We were able to generate large returns even by identifying short candidates. Our portfolio of short stocks lost 28.2% since February 2017 (through June 18th) even though the market was up nearly 30% during the same period. We just shared a list of 5 short targets in our latest quarterly update and they are already down an average of 8.2% in a month whereas our long picks outperformed the market by 2.5 percentage points in this volatile 5 week period (our long picks also beat the market by 15 percentage points so far this year).

At Q1’s end, a total of 26 of the hedge funds tracked by Insider Monkey were long this stock, a change of 4% from the fourth quarter of 2018. The graph below displays the number of hedge funds with bullish position in TKR over the last 15 quarters. With hedge funds’ positions undergoing their usual ebb and flow, there exists a select group of key hedge fund managers who were boosting their stakes substantially (or already accumulated large positions). 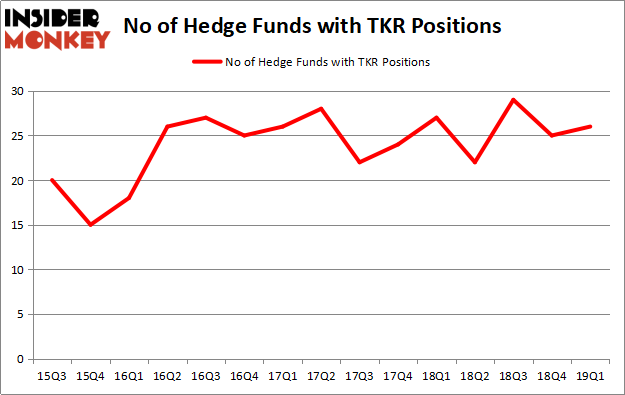 Consequently, specific money managers have jumped into The Timken Company (NYSE:TKR) headfirst. Interval Partners, managed by Gregg Moskowitz, assembled the most valuable position in The Timken Company (NYSE:TKR). Interval Partners had $14.4 million invested in the company at the end of the quarter. Sander Gerber’s Hudson Bay Capital Management also initiated a $8.1 million position during the quarter. The other funds with new positions in the stock are Peter Rathjens, Bruce Clarke and John Campbell’s Arrowstreet Capital, Robert Polak’s Anchor Bolt Capital, and Vivian Lau’s One Tusk Investment Partners.

As you can see these stocks had an average of 18.5 hedge funds with bullish positions and the average amount invested in these stocks was $317 million. That figure was $288 million in TKR’s case. Perspecta Inc. (NYSE:PRSP) is the most popular stock in this table. On the other hand Qutoutiao Inc. (NASDAQ:QTT) is the least popular one with only 5 bullish hedge fund positions. The Timken Company (NYSE:TKR) is not the most popular stock in this group but hedge fund interest is still above average. Our calculations showed that top 20 most popular stocks among hedge funds returned 6.2% in Q2 through June 19th and outperformed the S&P 500 ETF (SPY) by nearly 3 percentage points. Hedge funds were also right about betting on TKR as the stock returned 13% during the same period and outperformed the market by an even larger margin. Hedge funds were rewarded for their relative bullishness.