While the market driven by short-term sentiment influenced by the accomodative interest rate environment in the US, increasing oil prices and deteriorating expectations towards the resolution of the trade war with China, many smart money investors kept their cautious approach regarding the current bull run in the second quarter and hedging or reducing many of their long positions. Some fund managers like this one are betting on Dow hitting 40,000 to generate strong returns. However, as we know, big investors usually buy stocks with strong fundamentals that can deliver gains both in bull and bear markets, which is why we believe we can profit from imitating them. In this article, we are going to take a look at the smart money sentiment surrounding Ross Stores, Inc. (NASDAQ:ROST).

Ross Stores, Inc. (NASDAQ:ROST) shareholders have witnessed an increase in hedge fund interest of late. ROST was in 32 hedge funds’ portfolios at the end of June. There were 29 hedge funds in our database with ROST positions at the end of the previous quarter. Our calculations also showed that ROST isn’t among the 30 most popular stocks among hedge funds.

Today there are tons of gauges shareholders use to appraise their stock investments. Some of the most useful gauges are hedge fund and insider trading sentiment. We have shown that, historically, those who follow the top picks of the elite investment managers can outclass the market by a healthy amount (see the details here).

Heading into the third quarter of 2019, a total of 32 of the hedge funds tracked by Insider Monkey held long positions in this stock, a change of 10% from the first quarter of 2019. The graph below displays the number of hedge funds with bullish position in ROST over the last 16 quarters. With the smart money’s sentiment swirling, there exists a few notable hedge fund managers who were adding to their holdings substantially (or already accumulated large positions). 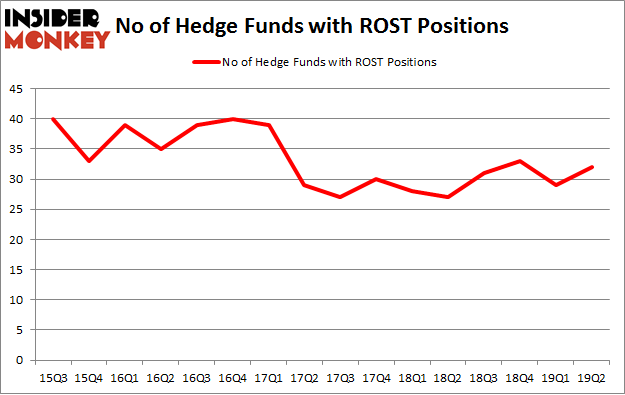 According to publicly available hedge fund and institutional investor holdings data compiled by Insider Monkey, Cliff Asness’s AQR Capital Management has the number one position in Ross Stores, Inc. (NASDAQ:ROST), worth close to $182 million, accounting for 0.2% of its total 13F portfolio. Sitting at the No. 2 spot is Dan Loeb of Third Point, with a $163.5 million position; the fund has 1.9% of its 13F portfolio invested in the stock. Other peers that hold long positions comprise D. E. Shaw’s D E Shaw, Ken Griffin’s Citadel Investment Group and Anand Parekh’s Alyeska Investment Group.

Consequently, key money managers were breaking ground themselves. Renaissance Technologies assembled the largest position in Ross Stores, Inc. (NASDAQ:ROST). Renaissance Technologies had $47.5 million invested in the company at the end of the quarter. Dmitry Balyasny’s Balyasny Asset Management also made a $9.3 million investment in the stock during the quarter. The other funds with brand new ROST positions are Lee Ainslie’s Maverick Capital, Matthew Hulsizer’s PEAK6 Capital Management, and Perella Weinberg Partners.

As you can see these stocks had an average of 41 hedge funds with bullish positions and the average amount invested in these stocks was $3027 million. That figure was $862 million in ROST’s case. Anadarko Petroleum Corporation (NYSE:APC) is the most popular stock in this table. On the other hand Canadian Imperial Bank of Commerce (NYSE:CM) is the least popular one with only 12 bullish hedge fund positions. Ross Stores, Inc. (NASDAQ:ROST) is not the least popular stock in this group but hedge fund interest is still below average. Our calculations showed that top 20 most popular stocks (see the video below) among hedge funds returned 24.4% in 2019 through September 30th and outperformed the S&P 500 ETF (SPY) by 4 percentage points. A small number of hedge funds were also right about betting on ROST as the stock returned 11.1% during the same time frame and outperformed the market by an even larger margin.