How do you pick the next stock to invest in? One way would be to spend days of research browsing through thousands of publicly traded companies. However, an easier way is to look at the stocks that smart money investors are collectively bullish on. Hedge funds and other institutional investors usually invest large amounts of capital and have to conduct due diligence while choosing their next pick. They don’t always get it right, but, on average, their stock picks historically generated strong returns after adjusting for known risk factors. With this in mind, let’s take a look at the recent hedge fund activity surrounding Planet Fitness Inc (NYSE:PLNT) and determine whether hedge funds had an edge regarding this stock.

Planet Fitness Inc (NYSE:PLNT) has seen an increase in activity from the world’s largest hedge funds lately. PLNT was in 44 hedge funds’ portfolios at the end of March. There were 34 hedge funds in our database with PLNT positions at the end of the previous quarter. Our calculations also showed that PLNT isn’t among the 30 most popular stocks among hedge funds (click for Q1 rankings and see the video for a quick look at the top 5 stocks).

At Insider Monkey we scour multiple sources to uncover the next great investment idea. For example, this trader claims to score lucrative profits by utilizing a “weekend trading strategy”, so we look into his strategy’s picks. Federal Reserve has been creating trillions of dollars electronically to keep the interest rates near zero. We believe this will lead to inflation and boost gold prices. So, we are checking out this junior gold mining stock. We read hedge fund investor letters and listen to stock pitches at hedge fund conferences. We recently recommended several stocks partly inspired by legendary Bill Miller’s investor letter. Our best call in 2020 was shorting the market when the S&P 500 was trading at 3150 in February after realizing the coronavirus pandemic’s significance before most investors. Keeping this in mind let’s check out the new hedge fund action surrounding Planet Fitness Inc (NYSE:PLNT).

At the end of the first quarter, a total of 44 of the hedge funds tracked by Insider Monkey held long positions in this stock, a change of 29% from one quarter earlier. By comparison, 25 hedge funds held shares or bullish call options in PLNT a year ago. With the smart money’s sentiment swirling, there exists a few notable hedge fund managers who were upping their stakes substantially (or already accumulated large positions). 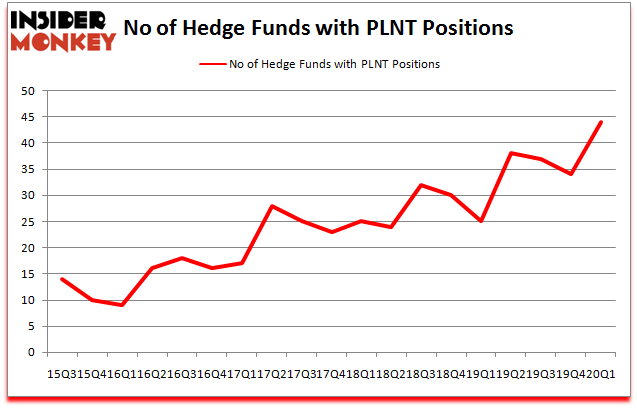 When looking at the institutional investors followed by Insider Monkey, SRS Investment Management, managed by Karthik Sarma, holds the number one position in Planet Fitness Inc (NYSE:PLNT). SRS Investment Management has a $163.6 million position in the stock, comprising 3.6% of its 13F portfolio. Sitting at the No. 2 spot is Steadfast Capital Management, managed by Robert Pitts, which holds a $129.5 million position; 2% of its 13F portfolio is allocated to the stock. Some other professional money managers that are bullish comprise Ross Turner’s Pelham Capital, David Gallo’s Valinor Management LLC and Ricky Sandler’s Eminence Capital. In terms of the portfolio weights assigned to each position Pelham Capital allocated the biggest weight to Planet Fitness Inc (NYSE:PLNT), around 14.03% of its 13F portfolio. Deep Field Asset Management is also relatively very bullish on the stock, designating 9.12 percent of its 13F equity portfolio to PLNT.

As aggregate interest increased, some big names were breaking ground themselves. Eminence Capital, managed by Ricky Sandler, established the most valuable position in Planet Fitness Inc (NYSE:PLNT). Eminence Capital had $44.1 million invested in the company at the end of the quarter. Richard Scott Greeder’s Broad Bay Capital also made a $26.2 million investment in the stock during the quarter. The other funds with brand new PLNT positions are Louis Bacon’s Moore Global Investments, Alexander Mitchell’s Scopus Asset Management, and Kamyar Khajavi’s MIK Capital.

As you can see these stocks had an average of 25.25 hedge funds with bullish positions and the average amount invested in these stocks was $307 million. That figure was $805 million in PLNT’s case. Owens Corning (NYSE:OC) is the most popular stock in this table. On the other hand Kimco Realty Corp (NYSE:KIM) is the least popular one with only 22 bullish hedge fund positions. Compared to these stocks Planet Fitness Inc (NYSE:PLNT) is more popular among hedge funds. Our calculations showed that top 10 most popular stocks among hedge funds returned 41.4% in 2019 and outperformed the S&P 500 ETF (SPY) by 10.1 percentage points. These stocks gained 12.3% in 2020 through June 30th but still managed to beat the market by 15.5 percentage points. Hedge funds were also right about betting on PLNT, though not to the same extent, as the stock returned 24.4% in Q2 and outperformed the market as well.