At the end of February we announced the arrival of the first US recession since 2009 and we predicted that the market will decline by at least 20% in (see why hell is coming). In these volatile markets we scrutinize hedge fund filings to get a reading on which direction each stock might be going. In this article, we will take a closer look at hedge fund sentiment towards Parsley Energy Inc (NYSE:PE) at the end of the first quarter and determine whether the smart money was really smart about this stock.

Is Parsley Energy Inc (NYSE:PE) a great investment today? The best stock pickers were taking a bearish view. The number of bullish hedge fund bets dropped by 7 in recent months. Our calculations also showed that PE isn’t among the 30 most popular stocks among hedge funds (click for Q1 rankings and see the video for a quick look at the top 5 stocks). PE was in 45 hedge funds’ portfolios at the end of March. There were 52 hedge funds in our database with PE holdings at the end of the previous quarter.

At Insider Monkey we scour multiple sources to uncover the next great investment idea. For example, this trader claims to score lucrative profits by utilizing a “weekend trading strategy”, so we look into his strategy’s picks. Federal Reserve has been creating trillions of dollars electronically to keep the interest rates near zero. We believe this will lead to inflation and boost gold prices. So, we are checking out this junior gold mining stock. We read hedge fund investor letters and listen to stock pitches at hedge fund conferences. We recently recommended several stocks partly inspired by legendary Bill Miller’s investor letter. Our best call in 2020 was shorting the market when the S&P 500 was trading at 3150 in February after realizing the coronavirus pandemic’s significance before most investors. Now we’re going to view the latest hedge fund action surrounding Parsley Energy Inc (NYSE:PE).

What have hedge funds been doing with Parsley Energy Inc (NYSE:PE)?

At Q1’s end, a total of 45 of the hedge funds tracked by Insider Monkey were long this stock, a change of -13% from the fourth quarter of 2019. By comparison, 34 hedge funds held shares or bullish call options in PE a year ago. With hedge funds’ sentiment swirling, there exists a few key hedge fund managers who were increasing their stakes substantially (or already accumulated large positions). 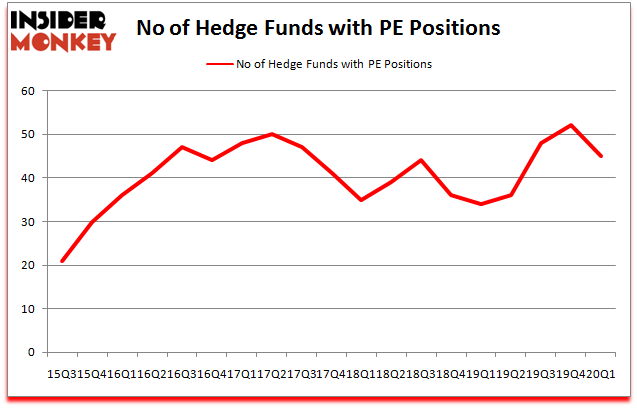 According to Insider Monkey’s hedge fund database, Citadel Investment Group, managed by Ken Griffin, holds the number one position in Parsley Energy Inc (NYSE:PE). Citadel Investment Group has a $80.4 million position in the stock, comprising less than 0.1%% of its 13F portfolio. On Citadel Investment Group’s heels is Phill Gross and Robert Atchinson of Adage Capital Management, with a $63.7 million position; the fund has 0.2% of its 13F portfolio invested in the stock. Other professional money managers that hold long positions consist of Todd J. Kantor’s Encompass Capital Advisors, Brandon Haley’s Holocene Advisors and Israel Englander’s Millennium Management. In terms of the portfolio weights assigned to each position SIR Capital Management allocated the biggest weight to Parsley Energy Inc (NYSE:PE), around 6.99% of its 13F portfolio. Encompass Capital Advisors is also relatively very bullish on the stock, designating 4.78 percent of its 13F equity portfolio to PE.

Due to the fact that Parsley Energy Inc (NYSE:PE) has witnessed falling interest from the entirety of the hedge funds we track, it’s easy to see that there was a specific group of hedgies that slashed their entire stakes last quarter. It’s worth mentioning that Zach Schreiber’s Point State Capital said goodbye to the largest investment of the “upper crust” of funds tracked by Insider Monkey, worth about $41.3 million in stock, and David Alexander Witkin’s Beryl Capital Management was right behind this move, as the fund dropped about $19.4 million worth. These bearish behaviors are important to note, as total hedge fund interest dropped by 7 funds last quarter.

As you can see these stocks had an average of 16 hedge funds with bullish positions and the average amount invested in these stocks was $112 million. That figure was $438 million in PE’s case. FireEye Inc (NASDAQ:FEYE) is the most popular stock in this table. On the other hand Youdao, Inc. (NYSE:DAO) is the least popular one with only 6 bullish hedge fund positions. Compared to these stocks Parsley Energy Inc (NYSE:PE) is more popular among hedge funds. Our calculations showed that top 10 most popular stocks among hedge funds returned 41.4% in 2019 and outperformed the S&P 500 ETF (SPY) by 10.1 percentage points. These stocks returned 12.3% in 2020 through June 30th but still managed to beat the market by 15.5 percentage points. Hedge funds were also right about betting on PE as the stock returned 87.2% in Q2 and outperformed the market by an even larger margin. Hedge funds were clearly right about piling into this stock relative to other stocks with similar market capitalizations.