Concerns over rising interest rates and expected further rate increases have hit several stocks hard during the fourth quarter of 2018. Trends reversed 180 degrees during the first half of 2019 amid Powell’s pivot and optimistic expectations towards a trade deal with China. Hedge funds and institutional investors tracked by Insider Monkey usually invest a disproportionate amount of their portfolios in smaller cap stocks. We have been receiving indications that hedge funds were increasing their overall exposure in the second quarter and this is one of the factors behind the recent movements in major indices. In this article, we will take a closer look at hedge fund sentiment towards NextEra Energy, Inc. (NYSE:NEE).

NextEra Energy, Inc. (NYSE:NEE) has seen an increase in enthusiasm from smart money in recent months. NEE was in 40 hedge funds’ portfolios at the end of June. There were 36 hedge funds in our database with NEE positions at the end of the previous quarter. Our calculations also showed that NEE isn’t among the 30 most popular stocks among hedge funds (see the video at the end of this article).

In the eyes of most traders, hedge funds are perceived as slow, outdated financial tools of yesteryear. While there are greater than 8000 funds in operation at the moment, We choose to focus on the bigwigs of this group, approximately 750 funds. These money managers manage bulk of the hedge fund industry’s total asset base, and by keeping an eye on their inimitable investments, Insider Monkey has found various investment strategies that have historically beaten Mr. Market. Insider Monkey’s flagship hedge fund strategy outrun the S&P 500 index by around 5 percentage points per annum since its inception in May 2014. We were able to generate large returns even by identifying short candidates. Our portfolio of short stocks lost 25.7% since February 2017 (through September 30th) even though the market was up more than 33% during the same period. We just shared a list of 10 short targets in our latest quarterly update .

Unlike some fund managers who are betting on Dow reaching 40000 in a year, our long-short investment strategy doesn’t rely on bull markets to deliver double digit returns. We only rely on hedge fund buy/sell signals. We’re going to take a look at the latest hedge fund action encompassing NextEra Energy, Inc. (NYSE:NEE). 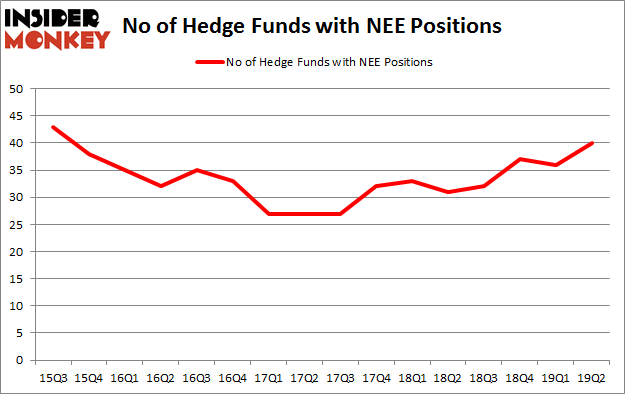 Consequently, key money managers have been driving this bullishness. ExodusPoint Capital, managed by Michael Gelband, created the largest position in NextEra Energy, Inc. (NYSE:NEE). ExodusPoint Capital had $17.6 million invested in the company at the end of the quarter. Andrew Weiss’s Weiss Asset Management also made a $11.2 million investment in the stock during the quarter. The other funds with brand new NEE positions are Steve Pattyn’s Yaupon Capital, Jonathan Barrett and Paul Segal’s Luminus Management, and Louis Navellier’s Navellier & Associates.

As you can see these stocks had an average of 48.5 hedge funds with bullish positions and the average amount invested in these stocks was $2549 million. That figure was $742 million in NEE’s case. QUALCOMM, Incorporated (NASDAQ:QCOM) is the most popular stock in this table. On the other hand Petroleo Brasileiro S.A. – Petrobras (NYSE:PBR) is the least popular one with only 32 bullish hedge fund positions. NextEra Energy, Inc. (NYSE:NEE) is not the least popular stock in this group but hedge fund interest is still below average. Our calculations showed that top 20 most popular stocks among hedge funds returned 24.4% in 2019 through September 30th and outperformed the S&P 500 ETF (SPY) by 4 percentage points. A small number of hedge funds were also right about betting on NEE as the stock returned 14.4% during the same time frame and outperformed the market by an even larger margin.