Were Hedge Funds Right About Piling Into Jabil Inc. (JBL)?

Jabil Inc. (NYSE:JBL) investors should pay attention to an increase in hedge fund sentiment in recent months. Our calculations also showed that JBL isn’t among the 30 most popular stocks among hedge funds (see the video below).

How have hedgies been trading Jabil Inc. (NYSE:JBL)? 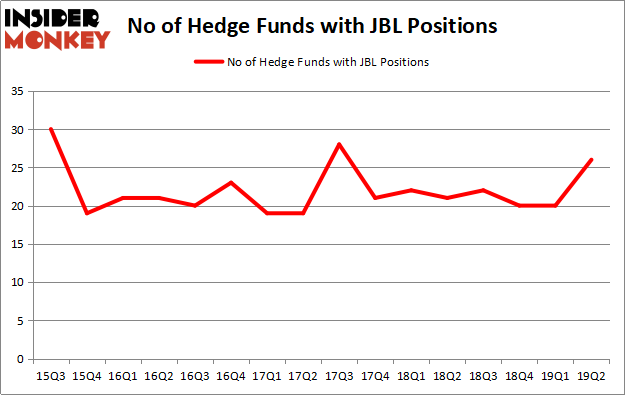 Now, key hedge funds have been driving this bullishness. Shellback Capital, managed by Doug Gordon, Jon Hilsabeck and Don Jabro, initiated the most valuable position in Jabil Inc. (NYSE:JBL). Shellback Capital had $14.6 million invested in the company at the end of the quarter. David Harding’s Winton Capital Management also initiated a $2.5 million position during the quarter. The other funds with new positions in the stock are Lee Ainslie’s Maverick Capital, Michael Kharitonov and Jon David McAuliffe’s Voleon Capital, and Hoon Kim’s Quantinno Capital.

Let’s go over hedge fund activity in other stocks – not necessarily in the same industry as Jabil Inc. (NYSE:JBL) but similarly valued. These stocks are Seaboard Corporation (NYSEAMEX:SEB), MGIC Investment Corporation (NYSE:MTG), Cyberark Software Ltd (NASDAQ:CYBR), and ONE Gas Inc (NYSE:OGS). This group of stocks’ market caps are similar to JBL’s market cap.

As you can see these stocks had an average of 21 hedge funds with bullish positions and the average amount invested in these stocks was $258 million. That figure was $315 million in JBL’s case. MGIC Investment Corporation (NYSE:MTG) is the most popular stock in this table. On the other hand ONE Gas Inc (NYSE:OGS) is the least popular one with only 14 bullish hedge fund positions. Jabil Inc. (NYSE:JBL) is not the most popular stock in this group but hedge fund interest is still above average. Our calculations showed that top 20 most popular stocks among hedge funds returned 24.4% in 2019 through September 30th and outperformed the S&P 500 ETF (SPY) by 4 percentage points. Hedge funds were also right about betting on JBL as the stock returned 13.5% during the third quarter and outperformed the market. Hedge funds were rewarded for their relative bullishness.

Do Hedge Funds Love Genesco Inc. (GCO)?
Monthly Newsletter Strategy
Download a free copy of our newsletter and see the details inside!
Hedge Fund Resource Center
Related News
Here’s What Hedge Funds Think About Jabil Inc. (JBL) Did Hedge Funds Drop The Ball On Jabil Inc. (JBL) ? Hedge Funds Are Crazy About Jabil Inc. (JBL) Why Boeing, Jabil Circuit and Three Financial Stocks Are Making Headlines on Thursday These Stocks Were Getting Some Analyst Love On Tuesday Why Are Ctrip.com, Jabil Circuit, CLARCOR, and Two Other Stocks Trending Today? Why Ctrip, Jabil, and Three Other Stocks Are Trading Down Today 11 Largest Auto Insurance Companies In The US In 2019 10 Poorest Cities in America in 2019 8 Lowest Tar and Nicotine Cigarette Brands in 2019
Billionaire Hedge Funds