Were Hedge Funds Right About Piling Into Emerson Electric Co. (EMR) in September?

It seems that the masses and most of the financial media hate hedge funds and what they do, but why is this hatred of hedge funds so prominent? At the end of the day, these asset management firms do not gamble the hard-earned money of the people who are on the edge of poverty. Truth be told, most hedge fund managers and other smaller players within this industry are very smart and skilled investors. Of course, they may also make wrong bets in some instances, but no one knows what the future holds and how market participants will react to the bountiful news that floods in each day. The Standard and Poor’s 500 Total Return Index ETFs returned approximately 27.5% in 2019 (through the end of November). Conversely, hedge funds’ top 20 large-cap stock picks generated a return of 37.4% during the same 11-month period, with the majority of these stock picks outperforming the broader market benchmark. Coincidence? It might happen to be so, but it is unlikely. Our research covering the last 18 years indicates that hedge funds’ consensus stock picks generate superior risk-adjusted returns. That’s why we believe it isn’t a waste of time to check out hedge fund sentiment before you invest in a stock like Emerson Electric Co. (NYSE:EMR).

Emerson Electric Co. (NYSE:EMR) was in 37 hedge funds’ portfolios at the end of the third quarter of 2019. EMR has seen an increase in enthusiasm from smart money in recent months. There were 32 hedge funds in our database with EMR positions at the end of the previous quarter. Our calculations also showed that EMR isn’t among the 30 most popular stocks among hedge funds (click for Q3 rankings and see the video below for Q2 rankings).

To most investors, hedge funds are perceived as worthless, outdated investment tools of years past. While there are more than 8000 funds in operation today, Our experts choose to focus on the top tier of this group, around 750 funds. It is estimated that this group of investors orchestrate the majority of the hedge fund industry’s total asset base, and by keeping track of their first-class picks, Insider Monkey has brought to light many investment strategies that have historically outpaced the market. Insider Monkey’s flagship short hedge fund strategy defeated the S&P 500 short ETFs by around 20 percentage points a year since its inception in May 2014. Our portfolio of short stocks lost 27.8% since February 2017 (through November 21st) even though the market was up more than 39% during the same period. We just shared a list of 7 short targets in our latest quarterly update .

Unlike the largest US hedge funds that are convinced Dow will soar past 40,000 or the world’s most bearish hedge fund that’s more convinced than ever that a crash is coming, our long-short investment strategy doesn’t rely on bull or bear markets to deliver double digit returns. We only rely on the best performing hedge funds‘ buy/sell signals. We’re going to take a look at the key hedge fund action surrounding Emerson Electric Co. (NYSE:EMR).

At the end of the third quarter, a total of 37 of the hedge funds tracked by Insider Monkey were long this stock, a change of 16% from one quarter earlier. On the other hand, there were a total of 32 hedge funds with a bullish position in EMR a year ago. With the smart money’s capital changing hands, there exists a select group of key hedge fund managers who were upping their stakes significantly (or already accumulated large positions). 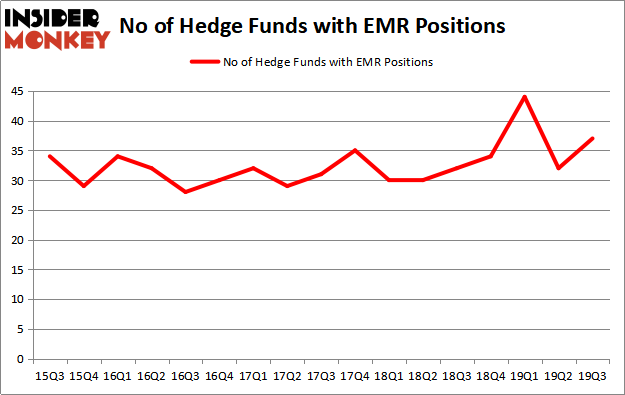 According to publicly available hedge fund and institutional investor holdings data compiled by Insider Monkey, Two Sigma Advisors, managed by John Overdeck and David Siegel, holds the number one position in Emerson Electric Co. (NYSE:EMR). Two Sigma Advisors has a $83.6 million position in the stock, comprising 0.2% of its 13F portfolio. On Two Sigma Advisors’s heels is Doug Silverman and Alexander Klabin of Senator Investment Group, with a $78.6 million position; 2% of its 13F portfolio is allocated to the company. Other members of the smart money that hold long positions consist of Cliff Asness’s AQR Capital Management, Gregg Moskowitz’s Interval Partners and Benjamin Pass’s TOMS Capital. In terms of the portfolio weights assigned to each position TOMS Capital allocated the biggest weight to Emerson Electric Co. (NYSE:EMR), around 7.41% of its portfolio. Bronson Point Partners is also relatively very bullish on the stock, designating 5.98 percent of its 13F equity portfolio to EMR.

As one would reasonably expect, specific money managers have jumped into Emerson Electric Co. (NYSE:EMR) headfirst. Interval Partners, managed by Gregg Moskowitz, initiated the most outsized position in Emerson Electric Co. (NYSE:EMR). Interval Partners had $56.9 million invested in the company at the end of the quarter. Benjamin Pass’s TOMS Capital also made a $46.8 million investment in the stock during the quarter. The other funds with brand new EMR positions are David E. Shaw’s D E Shaw, Alexander Mitchell’s Scopus Asset Management, and Louis Bacon’s Moore Global Investments.

As you can see these stocks had an average of 40.75 hedge funds with bullish positions and the average amount invested in these stocks was $1899 million. That figure was $594 million in EMR’s case. HCA Healthcare Inc (NYSE:HCA) is the most popular stock in this table. On the other hand BB&T Corporation (NYSE:BBT) is the least popular one with only 26 bullish hedge fund positions. Emerson Electric Co. (NYSE:EMR) is not the least popular stock in this group but hedge fund interest is still below average. Our calculations showed that top 20 most popular stocks among hedge funds returned 37.4% in 2019 through the end of November and outperformed the S&P 500 ETF (SPY) by 9.9 percentage points. A small number of hedge funds were also right about betting on EMR as the stock returned 11.2% during the first two months of Q4 and outperformed the market by an even larger margin.