In these volatile markets we scrutinize hedge fund filings to get a reading on which direction each stock might be going. Hedge Funds and other institutional investors have just completed filing their 13Fs with the Securities and Exchange Commission, revealing their equity portfolios as of the end of December. At Insider Monkey, we follow nearly 835 active hedge funds and notable investors and by analyzing their 13F filings, we can determine the stocks that they are collectively bullish on. One of their picks is Crown Holdings, Inc. (NYSE:CCK), so let’s take a closer look at the sentiment that surrounds it in the current quarter.

Crown Holdings, Inc. (NYSE:CCK) investors should be aware of an increase in hedge fund sentiment lately. CCK was in 58 hedge funds’ portfolios at the end of December. There were 42 hedge funds in our database with CCK positions at the end of the previous quarter. Our calculations also showed that CCK isn’t among the 30 most popular stocks among hedge funds (click for Q4 rankings and see the video at the end of this article for Q3 rankings).

We leave no stone unturned when looking for the next great investment idea. For example, this trader is claiming triple digit returns, so we check out his latest trade recommendations. We read hedge fund investor letters and listen to stock pitches at hedge fund conferences (by the way watch this video if you want to hear one of the best healthcare hedge fund manager’s coronavirus analysis). Our best call in 2020 was shorting the market when S&P 500 was trading at 3150 after realizing the coronavirus pandemic’s significance before most investors. With all of this in mind we’re going to take a look at the recent hedge fund action regarding Crown Holdings, Inc. (NYSE:CCK).

What have hedge funds been doing with Crown Holdings, Inc. (NYSE:CCK)?

At Q4’s end, a total of 58 of the hedge funds tracked by Insider Monkey held long positions in this stock, a change of 38% from one quarter earlier. The graph below displays the number of hedge funds with bullish position in CCK over the last 18 quarters. With the smart money’s capital changing hands, there exists a select group of noteworthy hedge fund managers who were boosting their stakes meaningfully (or already accumulated large positions). 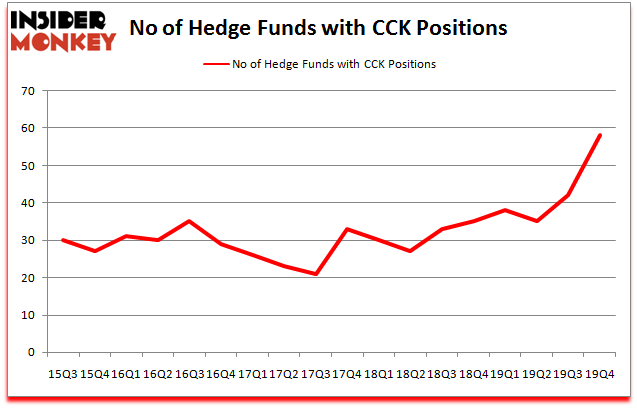 According to publicly available hedge fund and institutional investor holdings data compiled by Insider Monkey, Lyrical Asset Management, managed by Andrew Wellington and Jeff Keswin, holds the number one position in Crown Holdings, Inc. (NYSE:CCK). Lyrical Asset Management has a $345.8 million position in the stock, comprising 4.7% of its 13F portfolio. Sitting at the No. 2 spot is Maverick Capital, managed by Lee Ainslie, which holds a $205.3 million position; the fund has 3% of its 13F portfolio invested in the stock. Remaining professional money managers with similar optimism contain Barry Lebovits and Joshua Kuntz’s Rivulet Capital, Israel Englander’s Millennium Management and Douglas Dossey and Arthur Young’s Tensile Capital. In terms of the portfolio weights assigned to each position SAYA Management allocated the biggest weight to Crown Holdings, Inc. (NYSE:CCK), around 12.92% of its 13F portfolio. Akaris Global Partners is also relatively very bullish on the stock, designating 9.56 percent of its 13F equity portfolio to CCK.

With a general bullishness amongst the heavyweights, specific money managers have jumped into Crown Holdings, Inc. (NYSE:CCK) headfirst. Maverick Capital, managed by Lee Ainslie, initiated the biggest position in Crown Holdings, Inc. (NYSE:CCK). Maverick Capital had $205.3 million invested in the company at the end of the quarter. Clint Carlson’s Carlson Capital also made a $32.7 million investment in the stock during the quarter. The other funds with new positions in the stock are Jeffrey Hoffner’s Engle Capital, Ed Bosek’s BeaconLight Capital, and Renaissance Technologies.

As you can see these stocks had an average of 31 hedge funds with bullish positions and the average amount invested in these stocks was $887 million. That figure was $1378 million in CCK’s case. Mohawk Industries, Inc. (NYSE:MHK) is the most popular stock in this table. On the other hand Federal Realty Investment Trust (NYSE:FRT) is the least popular one with only 22 bullish hedge fund positions. Compared to these stocks Crown Holdings, Inc. (NYSE:CCK) is more popular among hedge funds. Our calculations showed that top 10 most popular stocks among hedge funds returned 41.4% in 2019 and outperformed the S&P 500 ETF (SPY) by 10.1 percentage points. These stocks lost 1.0% in 2020 through April 20th and still beat the market by 11 percentage points. Unfortunately CCK wasn’t nearly as popular as these 10 stocks and hedge funds that were betting on CCK were disappointed as the stock returned -15.5% during the three months of 2020 (through April 20th) and underperformed the market. If you are interested in investing in large cap stocks with huge upside potential, you should check out the top 10 most popular stocks among hedge funds as most of these stocks already outperformed the market in 2020.