Were Hedge Funds Right About Piling Into Allegion plc (ALLE)?

Out of thousands of stocks that are currently traded on the market, it is difficult to identify those that will really generate strong returns. Hedge funds and institutional investors spend millions of dollars on analysts with MBAs and PhDs, who are industry experts and well connected to other industry and media insiders on top of that. Individual investors can piggyback the hedge funds employing these talents and can benefit from their vast resources and knowledge in that way. We analyze quarterly 13F filings of nearly 750 hedge funds and, by looking at the smart money sentiment that surrounds a stock, we can determine whether it has the potential to beat the market over the long-term. Therefore, let’s take a closer look at what smart money thinks about Allegion plc (NYSE:ALLE).

Allegion plc (NYSE:ALLE) shareholders have witnessed an increase in hedge fund interest of late. ALLE was in 25 hedge funds’ portfolios at the end of the fourth quarter of 2018. There were 15 hedge funds in our database with ALLE positions at the end of the previous quarter. Our calculations also showed that ALLE isn’t among the 30 most popular stocks among hedge funds.

Heading into the first quarter of 2019, a total of 25 of the hedge funds tracked by Insider Monkey were bullish on this stock, a change of 67% from one quarter earlier. On the other hand, there were a total of 22 hedge funds with a bullish position in ALLE a year ago. With hedgies’ capital changing hands, there exists a select group of key hedge fund managers who were increasing their holdings substantially (or already accumulated large positions). 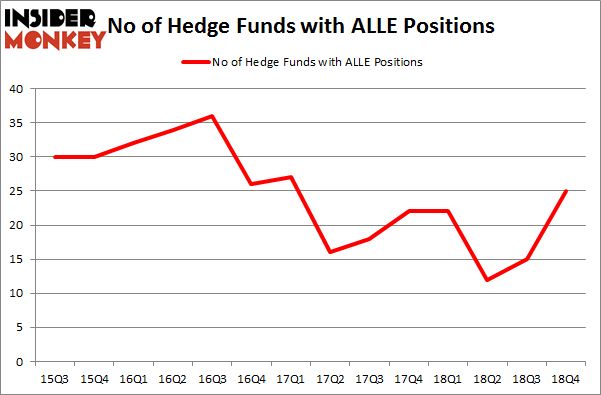 Consequently, specific money managers have been driving this bullishness. Citadel Investment Group, managed by Ken Griffin, initiated the most outsized position in Allegion plc (NYSE:ALLE). Citadel Investment Group had $14.1 million invested in the company at the end of the quarter. Daniel Lascano’s Lomas Capital Management also made a $14.1 million investment in the stock during the quarter. The other funds with new positions in the stock are Lee Ainslie’s Maverick Capital, Matthew Tewksbury’s Stevens Capital Management, and Dmitry Balyasny’s Balyasny Asset Management.

Let’s now review hedge fund activity in other stocks – not necessarily in the same industry as Allegion plc (NYSE:ALLE) but similarly valued. We will take a look at The Western Union Company (NYSE:WU), LKQ Corporation (NASDAQ:LKQ), Bunge Limited (NYSE:BG), and Ultrapar Participacoes SA (NYSE:UGP). All of these stocks’ market caps are closest to ALLE’s market cap.

As you can see these stocks had an average of 26.75 hedge funds with bullish positions and the average amount invested in these stocks was $562 million. That figure was $491 million in ALLE’s case. LKQ Corporation (NASDAQ:LKQ) is the most popular stock in this table. On the other hand Ultrapar Participacoes SA (NYSE:UGP) is the least popular one with only 3 bullish hedge fund positions. Allegion plc (NYSE:ALLE) is not the least popular stock in this group but hedge fund interest is still below average. Our calculations showed that the top 15 most popular stocks among hedge funds returned 21.3% year-to-date through April 8th and outperformed the S&P 500 ETF (SPY) by more than 5 percentage points. Hedge funds were also right about betting on ALLE, though not to the same extent, as the stock returned 18.8% and outperformed the market as well.