The Insider Monkey team has completed processing the quarterly 13F filings for the June quarter submitted by the hedge funds and other money managers included in our extensive database. Most hedge fund investors experienced strong gains on the back of a strong market performance, which certainly propelled them to adjust their equity holdings so as to maintain the desired risk profile. As a result, the relevancy of these public filings and their content is indisputable, as they may reveal numerous high-potential stocks. The following article will discuss the smart money sentiment towards Agnico Eagle Mines Limited (NYSE:AEM).

Is Agnico Eagle Mines Limited (NYSE:AEM) a healthy stock for your portfolio? The smart money is turning bullish. The number of bullish hedge fund positions went up by 2 lately. Our calculations also showed that AEM isn’t among the 30 most popular stocks among hedge funds.

At Q2’s end, a total of 26 of the hedge funds tracked by Insider Monkey were long this stock, a change of 8% from the previous quarter. On the other hand, there were a total of 18 hedge funds with a bullish position in AEM a year ago. With the smart money’s positions undergoing their usual ebb and flow, there exists a select group of key hedge fund managers who were boosting their holdings meaningfully (or already accumulated large positions). 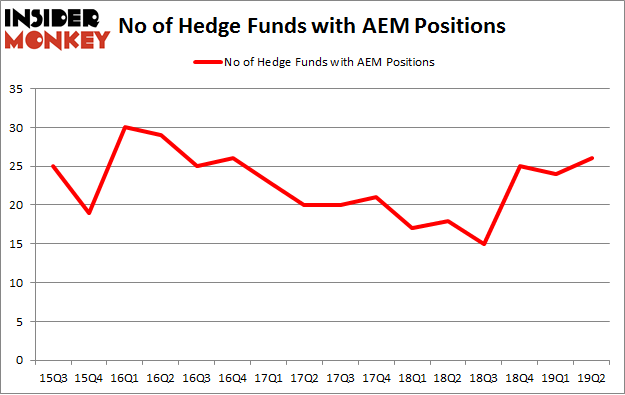 According to Insider Monkey’s hedge fund database, Renaissance Technologies has the biggest position in Agnico Eagle Mines Limited (NYSE:AEM), worth close to $105.3 million, corresponding to 0.1% of its total 13F portfolio. The second most bullish fund manager is Citadel Investment Group, led by Ken Griffin, holding a $68.8 million position; less than 0.1%% of its 13F portfolio is allocated to the company. Some other hedge funds and institutional investors that hold long positions include Brian Ashford-Russell and Tim Woolley’s Polar Capital, Robert B. Gillam’s McKinley Capital Management and John Paulson’s Paulson & Co.

Consequently, specific money managers were leading the bulls’ herd. Duquesne Capital, managed by Stanley Druckenmiller, established the most outsized position in Agnico Eagle Mines Limited (NYSE:AEM). Duquesne Capital had $21.5 million invested in the company at the end of the quarter. Ryan Caldwell’s Chiron Investment Management also made a $11.3 million investment in the stock during the quarter. The other funds with new positions in the stock are Louis Bacon’s Moore Global Investments, Karim Abbadi and Edward McBride’s Centiva Capital, and Sara Nainzadeh’s Centenus Global Management.

As you can see these stocks had an average of 24.25 hedge funds with bullish positions and the average amount invested in these stocks was $772 million. That figure was $380 million in AEM’s case. Wabtec Corporation (NYSE:WAB) is the most popular stock in this table. On the other hand Old Dominion Freight Line, Inc. (NASDAQ:ODFL) is the least popular one with only 23 bullish hedge fund positions. Agnico Eagle Mines Limited (NYSE:AEM) is not the most popular stock in this group but hedge fund interest is still above average. Our calculations showed that top 20 most popular stocks (see the video below) among hedge funds returned 24.4% in 2019 through September 30th and outperformed the S&P 500 ETF (SPY) by 4 percentage points. Hedge funds were also right about betting on AEM, though not to the same extent, as the stock returned 4.8% during the third quarter and outperformed the market as well.