At the end of February we announced the arrival of the first US recession since 2009 and we predicted that the market will decline by at least 20% in (see why hell is coming). In these volatile markets we scrutinize hedge fund filings to get a reading on which direction each stock might be going. In this article, we will take a closer look at hedge fund sentiment towards AGNC Investment Corp. (NASDAQ:AGNC) at the end of the first quarter and determine whether the smart money was really smart about this stock.

Is AGNC Investment Corp. (NASDAQ:AGNC) an exceptional investment today? Hedge funds were taking a bullish view. The number of bullish hedge fund bets improved by 6 recently. Our calculations also showed that AGNC isn’t among the 30 most popular stocks among hedge funds (click for Q1 rankings and see the video for a quick look at the top 5 stocks).

At Insider Monkey we scour multiple sources to uncover the next great investment idea. There is a lot of volatility in the markets and this presents amazing investment opportunities from time to time. For example, this trader claims to deliver juiced up returns with one trade a week, so we are checking out his highest conviction idea. A second trader claims to score lucrative profits by utilizing a “weekend trading strategy”, so we look into his strategy’s picks. We read hedge fund investor letters and listen to stock pitches at hedge fund conferences. Hedge fund sentiment towards Tesla reached its all time high at the end of 2019 and Tesla shares more than tripled this year. We are trying to identify other EV revolution winners, so we are checking out this tiny lithium stock. Keeping this in mind let’s review the latest hedge fund action encompassing AGNC Investment Corp. (NASDAQ:AGNC).

What have hedge funds been doing with AGNC Investment Corp. (NASDAQ:AGNC)? 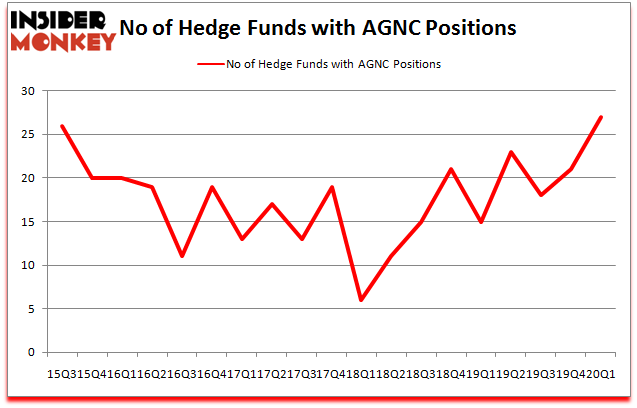 Among these funds, Athanor Capital held the most valuable stake in AGNC Investment Corp. (NASDAQ:AGNC), which was worth $60.8 million at the end of the third quarter. On the second spot was King Street Capital which amassed $42.3 million worth of shares. Lakewood Capital Management, Point72 Asset Management, and Citadel Investment Group were also very fond of the stock, becoming one of the largest hedge fund holders of the company. In terms of the portfolio weights assigned to each position King Street Capital allocated the biggest weight to AGNC Investment Corp. (NASDAQ:AGNC), around 4.73% of its 13F portfolio. Athanor Capital is also relatively very bullish on the stock, dishing out 3.95 percent of its 13F equity portfolio to AGNC.

With a general bullishness amongst the heavyweights, specific money managers were breaking ground themselves. Athanor Capital, managed by Parvinder Thiara, created the most valuable position in AGNC Investment Corp. (NASDAQ:AGNC). Athanor Capital had $60.8 million invested in the company at the end of the quarter. Brian J. Higgins’s King Street Capital also made a $42.3 million investment in the stock during the quarter. The other funds with brand new AGNC positions are Anthony Bozza’s Lakewood Capital Management, Steve Cohen’s Point72 Asset Management, and Scott Bessent’s Key Square Capital Management.

As you can see these stocks had an average of 23 hedge funds with bullish positions and the average amount invested in these stocks was $441 million. That figure was $303 million in AGNC’s case. Pegasystems Inc. (NASDAQ:PEGA) is the most popular stock in this table. On the other hand Huaneng Power International Inc (NYSE:HNP) is the least popular one with only 3 bullish hedge fund positions. AGNC Investment Corp. (NASDAQ:AGNC) is not the most popular stock in this group but hedge fund interest is still above average. Our calculations showed that top 10 most popular stocks among hedge funds returned 41.4% in 2019 and outperformed the S&P 500 ETF (SPY) by 10.1 percentage points. These stocks gained 12.3% in 2020 through June 30th but still beat the market by 15.5 percentage points. Hedge funds were also right about betting on AGNC, though not to the same extent, as the stock returned 25.4% during the second quarter and outperformed the market as well.