As we already know from media reports and hedge fund investor letters, many hedge funds lost money in fourth quarter, blaming macroeconomic conditions and unpredictable events that hit several sectors, with technology among them. Nevertheless, most investors decided to stick to their bullish theses and their long-term focus allows us to profit from the recent declines. In particular, let’s take a look at what hedge funds think about Novartis AG (NYSE:NVS) in this article.

Novartis AG (NYSE:NVS) investors should be aware of an increase in hedge fund sentiment lately. NVS was in 34 hedge funds’ portfolios at the end of December. There were 29 hedge funds in our database with NVS holdings at the end of the previous quarter. Our calculations also showed that NVS isn’t among the 30 most popular stocks among hedge funds. 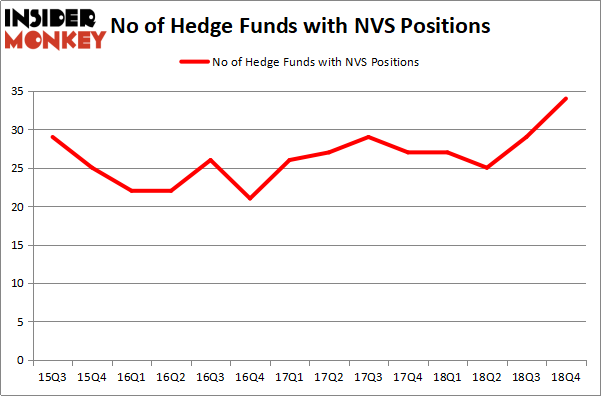 As aggregate interest increased, key hedge funds have been driving this bullishness. Senator Investment Group, managed by Doug Silverman and Alexander Klabin, assembled the largest position in Novartis AG (NYSE:NVS). Senator Investment Group had $30.9 million invested in the company at the end of the quarter. Ori Hershkovitz’s Nexthera Capital also made a $27.1 million investment in the stock during the quarter. The following funds were also among the new NVS investors: Phill Gross and Robert Atchinson’s Adage Capital Management, Joseph Samuels’s Islet Management, and Matthew Hulsizer’s PEAK6 Capital Management.

As you can see these stocks had an average of 41 hedge funds with bullish positions and the average amount invested in these stocks was $2915 million. That figure was $1827 million in NVS’s case. The Home Depot, Inc. (NYSE:HD) is the most popular stock in this table. On the other hand China Mobile Limited (NYSE:CHL) is the least popular one with only 14 bullish hedge fund positions. Novartis AG (NYSE:NVS) is not the least popular stock in this group but hedge fund interest is still below average. So, overall hedge fund sentiment is bearish to neutral. Our calculations showed that top 15 most popular stocks among hedge funds returned 19.7% through March 15th and outperformed the S&P 500 ETF (SPY) by 6.6 percentage points. Unfortunately NVS wasn’t in this group. Hedge funds that bet on NVS were disappointed as the stock returned 12.2% and underperformed the market. If you are interested in investing in large cap stocks, you should check out the top 15 hedge fund stocks as 13 of these outperformed the market.