In these volatile markets we scrutinize hedge fund filings to get a reading on which direction each stock might be going. Before we spend countless hours researching a company, we like to analyze what insiders, hedge funds and billionaire investors think of the stock first. This is a necessary first step in our investment process because our research has shown that the elite investors’ consensus returns have been exceptional. In the following paragraphs, we find out what the billionaire investors and hedge funds think of Northwest Natural Holding Company (NYSE:NWN).

Is Northwest Natural Holding Company (NYSE:NWN) a first-rate investment right now? The smart money is reducing their bets on the stock. The number of long hedge fund positions shrunk by 1 lately. Our calculations also showed that NWN isn’t among the 30 most popular stocks among hedge funds (click for Q4 rankings and see the video at the end of this article for Q3 rankings).

With all of this in mind we’re going to take a gander at the latest hedge fund action regarding Northwest Natural Holding Company (NYSE:NWN). 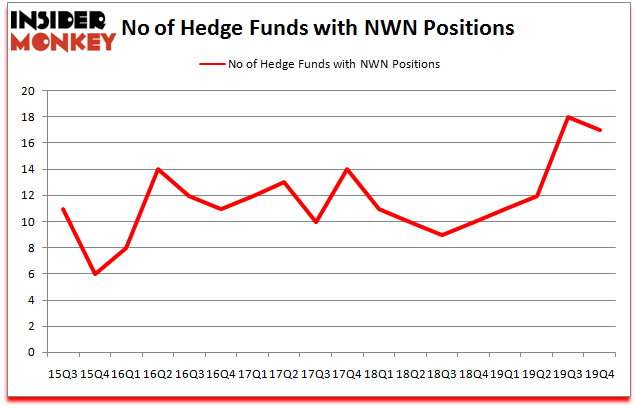 More specifically, Renaissance Technologies was the largest shareholder of Northwest Natural Holding Company (NYSE:NWN), with a stake worth $32.8 million reported as of the end of September. Trailing Renaissance Technologies was Winton Capital Management, which amassed a stake valued at $14 million. Fisher Asset Management, Millennium Management, and Paloma Partners were also very fond of the stock, becoming one of the largest hedge fund holders of the company. In terms of the portfolio weights assigned to each position Winton Capital Management allocated the biggest weight to Northwest Natural Holding Company (NYSE:NWN), around 0.2% of its 13F portfolio. Paloma Partners is also relatively very bullish on the stock, setting aside 0.13 percent of its 13F equity portfolio to NWN.

Due to the fact that Northwest Natural Holding Company (NYSE:NWN) has faced declining sentiment from the smart money, we can see that there were a few fund managers that slashed their positions entirely heading into Q4. Interestingly, Noam Gottesman’s GLG Partners dropped the largest investment of all the hedgies monitored by Insider Monkey, totaling about $1 million in stock, and Hoon Kim’s Quantinno Capital was right behind this move, as the fund cut about $0.4 million worth. These moves are intriguing to say the least, as total hedge fund interest fell by 1 funds heading into Q4.

As you can see these stocks had an average of 23.75 hedge funds with bullish positions and the average amount invested in these stocks was $617 million. That figure was $97 million in NWN’s case. Hertz Global Holdings, Inc. (NYSE:HTZ) is the most popular stock in this table. On the other hand Epizyme Inc (NASDAQ:EPZM) is the least popular one with only 18 bullish hedge fund positions. Compared to these stocks Northwest Natural Holding Company (NYSE:NWN) is even less popular than EPZM. Our calculations showed that top 20 most popular stocks among hedge funds returned 41.3% in 2019 and outperformed the S&P 500 ETF (SPY) by 10.1 percentage points. These stocks lost 13.0% in 2020 through April 6th but managed to beat the market by 4.2 percentage points. A small number of hedge funds were also right about betting on NWN, though not to the same extent, as the stock returned -16.4% during the same time period and outperformed the market as well.